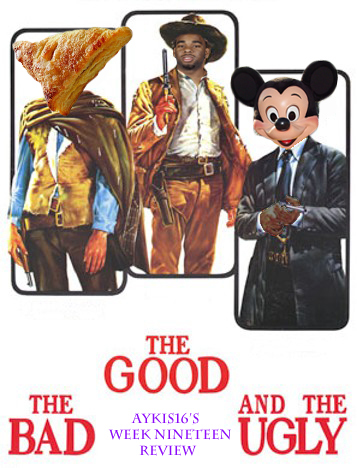 Mickey Mouse killed the Yeti, and now he's trying to kidnap our team.

Well this week started off on a great note with Here We Stay night, but as you know it went quickly downhill from there.

I liked the Marcus Thornton-Landry trade when it happened.  Now? I love it.  Thornton has averaged 21.2 PPG on 48.1% shooting since coming to Sacramento, including 40% from range.  Its been so nice having another scorer/shooter in the backcourt, especially with Tyreke gone.  His defense has also been better than I expected, although its still pretty bad at times, especially when he gets screened (Tyreke has trouble fighting through screens as well, but his length helps him compensate).  He's also got decent ball handling and passing skills, so its possible he could be more suited to play next to Tyreke Evans than we thought.

DeMarcus finally had a good week again.  His game against the Clippers was another awful game offensively, but his defense (3 blocks) and rebounding (9) helped the Kings win that game as well.  Then he went on to tie his career-highs in points (28 against Portland) and assists (7 against Utah) as well as set his new career-high in rebounding against Utah (18).  DeMarcus still has a long way to go, but when he puts together stretches like this as a rookie, you have to be impressed.

4. Francisco Garcia is Back

Boy is he ever.  18 points on only 6 shots in his first game back.  So much for rust.  I stand by my thinking that the Kings would've won several more games if he hadn't been injured.  They missed his shooting and defensive effort too much.

JT is rarely going to wow you with his stats, and that was true this week as well.  But he was extremely solid, shooting efficiently and hitting the glass hard.  He'll likely never become an All-Star, but he could be a solid rotation big man on a good team one day.

I'm liking Taylor more and more.  I don't know if he's a long-term piece for us (probably not) but he definitely deserves to be in the league.  He's explosive, an improving shooter, and he gets to the basket with ease.  There were several times with the Kings in need of a basket this week that he was able to take it to the rack for the easy layup and it reminded me a bit of "Reke-lite".

Beno has always been more of a scoring guard, but he can still find his teammates well when given the chance, and he led the team/game in assists all but the Utah game, when Cousins and Harris both had 7 to his 6.

1. Media Talking About How Bad the Crowd at Portland Game Was After Here We Stay Night

This was something that got on my nerves.  After the Portland game on Wednesday, everywhere in the media was talking about how Kings fans failed to show up again after selling out the previous game.  They're missing the point that we did manage to sell out a game, against the Clippers, on a weekday in February.  There's a reason we can't do that every game (the team is bad and the economy is worse).

The Kings had leads in both of these games and managed to screw it up down the stretch with poor execution and sloppy play, on both ends.  The Utah game was worse because they led by as much as 9 with 8 minutes left in the game, but ended up being just lucky enough to force overtime.

The Kings continue to rack up the miscues, with 16 being their lowest total in a game this week and still higher than their season average of 15.4, the second highest in the league to only the Timberwolves (16.5).  Its unsurprising to me that the top 4 teams in turnovers are among the youngest teams in the league (T-Wolves, Kings, Clippers and Wizards).  You have to learn how to take care of the ball.

Omri had to miss the Utah game with a sore back.  Hopefully its nothing serious and he's able to come back soon.  Also, what's up with Europeans and back injuries?  That's what brought Peja down from his peak, what made Vlade retire, Rudy Fernandez and Danilo Gallinari miss a bunch of time as well.  Its weird.

1. Everything About Possible Relocation

What a letdown this season has been for Hassan.  Coming into the year there were expectations that he could be a potential pairing with DeMarcus going forward, but then he ended up missing most of training camp and pre-season due to injury, and then when he went to the D-League, he sulked and fell out of the rotation because of it.  Now he has had to have knee surgery, sidelining him until next season.  He played 2 whole minutes and had 2 fouls his entire rookie season.  It can't get much worse than that.  Best of luck going forward though, I still think he can become a good player in this league, although probably not the stud I thought he could've been.

Everyone Who Came to Here We Stay Night

I can't tell you how proud I was Monday night to be a Kings fan, seeing all the fans there, hearing the chants, the stomping, the ARCO Thunder back in there.  You were all truly the "6th man" that game and definitely played a part in victory (especially making DeAndre Jordan miss those free throws).

No matter what happens with regards to relocation, its been a privilege and an honor to be a part of such a great fanbase.  Its always darkest before the dawn, as the old saying goes.  Let's hope we beat the odds for once.

This was me when I first saw this on the front page.

But if this is it for the team in Sacramento, I am going to really savor each and every one of my remaining games. As a season ticket holder I am already invested, so I may as well get the best return on my investment possible. I will cheer louder and longer for this team for the next five weeks. I will leave nothing on the table between now and April 13. And should the Kings ultimately leave, I will know it is because they quit on me, and not because I quit on them.

S Jackson: Hey Marcus if you could just jump a little higher, next time I wont use my hands, call me later.

This Week's Picture: (I suspect my choice of picture this week might make for some interesting captions.) 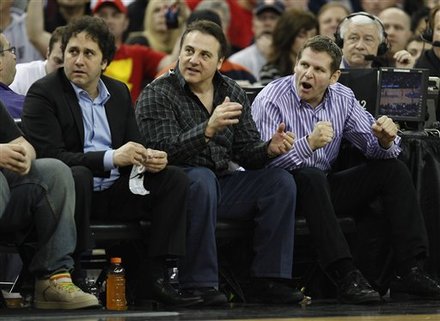 This week's caption contest winner gets a gallon of gasoline, a matchbook, and a map of Anaheim.  No reason.

The first thing you'll notice about Sullinger is that he's a bit undersized for a Power Forward, but don't tell him that.  He's stronger than most players already, and has made a name for himself in NCAA by punishing opponents down low.

Sullinger is definitely in the Elton Brand/Paul Millsap category as far as Power Forwards go, and still needs to work on a bit of an outside game to complement his outstanding post-game.  Still, his post-game is incredibly efficient, and he's shooting 56.6% in college, and getting to the line at a high rate as well (6.8 attempts a game)

While Sullinger is an excellent rebounder (on both offense and defense), his defensive potential remains the biggest question mark.  He's not exceptionally quick to guard most NBA PFs, and not tall enough to guard most NBA centers, so he'll definitely need to work on that part of his game.  He does do a good job of not fouling though (only 2.4 a game)

If there is one thing you shouldn't worry about Sullinger though its his character and work ethic.  There will be no red flags with him in the draft or through his career.  Sullinger will likely be one of the more NBA ready prospects available.  It remains to be seen if he'd be a good fit on a team with DeMarcus Cousins and Tyreke Evans, not to mention now Marcus Thornton, all three guys who also look to score a lot, much like Sullinger.

What is YOUR nickname for Marcus Thornton?

I like "Little Buckets" but I've heard others I've liked such as Bayou Bulldog, Le Rocher, and Little Rock.  The only one I don't like is "MT23" mainly because I hate those types of nicknames since they AREN'T nicknames.  I also know that a bunch of you will continue to use it for the sole purpose of pissing me off *cough*POOKEY*cough*

3/7 v. Houston W (I don't know why I just have a good feeling about this game)

3/9 v. Orlando L (Orlando is going to be plenty pissed off about losing to Sacramento at home a couple weeks ago)

3/14 v. Golden State W (Because I'm not allowed to say we're ever going to lose to the Warriors, its a clause in my contract)

Nostradumbass Record for the Season 26 - 33