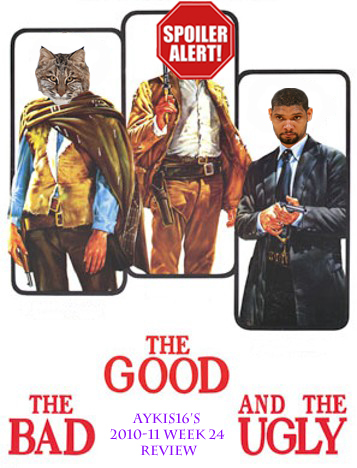 2. Marcus in the Clutch

Marcus had a bad shooting week overall, but it seems like he steps it up to another level when it counts, something I love to see.  Against Houston, he hit clutch shot after clutch shot to make up for some really stupid mistakes the Kings were making.  Then against Memphis he almost single-handedly brought the Kings back into that game and made it interesting at the end.  Its nice knowing you have more than one go-to option at the end of the game (yes, I still consider Reke one of them).

I have gone from Sammy D Hater to Sammy D Admirer to Sammy D Fan this year.  Three more double-doubles this week for the big fella and two 15+ rebound games.  He's making it extremely hard for the Kings to not re-sign him this offseason.  If they don't, this team will have taken a big step back both defensively and on the boards.

The Here We Build Rally last Tuesday was a rousing success, with over 300 Kings fans and media in attendance (on short notice on a weekday while work was going on, no less).  Big ups to Carmichael Dave for organizing it and anyone who attended.  Keep the faith Sactown.

I just want to say thank you to whoever the doctor was that gave Tyreke the shockwave treatment on his feet because we're seeing the old Tyreke again, and maybe a little bit more, as evidenced by that huge slam on Gary Neal and another nifty dunk against the Grizzlies (which unfortunately didn't count since he stepped out of bounds).  Reke seems to have a little extra spring in his step these last few games and that can only mean good things.  His production hasn't been half bad either.

6. Beno off the Bench

Beno has been filling his bench role nicely, still shooting as efficiently as ever and passing the ball well.  He also has fit well at times when playing with both Tyreke and Marcus.

Jason has very quietly started to become a much better and more consistent shooter from the field.  His FG% for the year is at 49.8% now, which would be the best of his three years, after slipping a bit last year.  Defensively he's making strides too.

I'm sorry for blaspheming, but I have to root for Jerry Buss and the Lakers to get enough support to block a Kings move to Anaheim if the Maloofs end up filing.  You can do it Jerry! (Now if you'll excuse me I have to go take a shower and cry).

It was reported that CSN might be trying to get involved in the process with keeping the Kings in Sacramento.  Now nobody knows how they want to get involved, but their current contract (worth about $11 million annually) expires soon, so perhaps a newer, more lucrative contract could help entice the Kings to stay.  All I know is they have a customer for life if they are involved with the Kings staying.

Marcus's hot shooting couldn't carry on forever.  This week he scored 63 points in 4 games but needed 66 shots to do it.  That's less than a point a shot.  Definitely not good.

By far Sacramento's most glaring weakness.  Cisco is the most consistent option we have and that's not good.  He's more of a guard anyway, and while he can play the spot on offense, defensively he's out of his league against most of the NBA's Small Forwards.  Donté is better defensively but on offense you never know if he'll be having a good shooting night or a bad shooting night (although its been getting better lately).

The Charlotte Bobcat Dancers are currently beating our Sacramento Kings Dance Team 54% to 46%.  Its up to YOU to change that.  Vote often.

1. 2nd Half Collapse Against San Antonio

That was just atrocious.  The game went from a 2 point deficit to a 22 point one in one quarter, where the Spurs scored 41 points.  The 4th quarter wasn't much better.

First one: Clear Path foul on DeMarcus when we were up 12.  That's two shots and the ball.  To make matters worse, Houston hit a three after the free throws, making it a 5 point possession for them.  Then came the atrocious inbounds from JT to Tyreke.  But worst of all was fouling Kyle Lowry while shooting a three... twice.  Has this team not learned?  Luckily Marcus was able to bail us out and we got the win.  But we shouldn't have been in that position in the first place.

Boogie's stats took a bit of a hit on Friday against the Grizzlies since he couldn't stay in the game due to foul trouble, but considering everyone on the team had at least one bad game this week, I thought I should recognize the work done by DeMarcus this week.  Last week I bagged on him for his rebounding and he responded in a big way this week, grabbing 9, 15, and 11 in the three games he was able to play big minutes in.  Against Utah he had a career high 5 steals, to go with 6 assists as well.  His passing has gotten better as the season has gone on too (even if he still racks up a bunch of turnovers).  One area where I really want to praise DeMarcus on is his toughness.  He's been hurting a lot this past month with his shoulder and he hasn't asked to come out once.  He has missed one game all year, despite various minor injuries, and that game was a team suspension.  Along with that, he's showed increased patience.  There is no doubt in my mind that on the court, DeMarcus has made a huge leap from where he is now to back in October. Comment of the Week (on why Beno didn't get up after Reke's dunk):

If Reke would have stopped and popped a 12 footer

it would have gotten Beno exploding out of his chair.

The Doctor who gave Tyreke the shockwave therapy for his foot should use this as advertising.

… And here’s Evans. Chests the ball down on the edge of the penalty area… Evans… Evans… EVANS…… 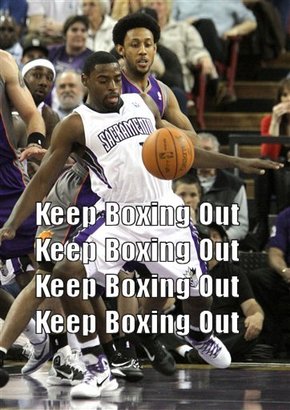 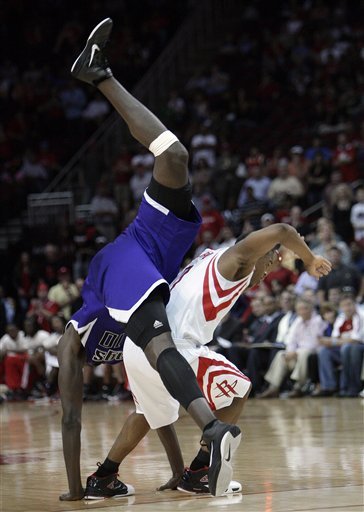 This week's caption contest winner gets a painting by Desmond Mason.

Kanter might be the best big man in this draft now with Jared Sullinger out.  He is a load down low and has a very advanced post-game for his age.  He's big, he's strong, and he's got a lot of skill.  He doesn't use it often, but his jumpshot has been improving as well.

Perhaps his best comparison is Houston's Luis Scola, except that unlike Scola, Kanter possesses the length and size to be able to create issues on the defensive end of the ball too.

One problem with Kanter lies in the fact that he hasn't played a basketball game in about a year.  He committed to Kentucky but the NCAA ruled him ineligible for his freshman year.  As such, while he was with the team, he was not allowed to practice or play with them in games.

Still, there is no doubt he's a very, very skilled big man.  I don't think he has star potential, but I do think he could be one of the better rookies out of the gate.  The Kings don't need him nearly as much as they would've a year ago before DeMarcus came on board, but he might end up being the Best Player Available where they pick.

Jimmer is one of the rare collegians who stayed in school his entire career, and unlike some, he got better each year.  This year he ended up leading the NCAA in scoring with 28.9 PPG.

Jimmer is a sharpshooter, able to hit well beyond even NBA 3 point range.  He's also got good court vision, but doesn't get as many assists as he would in the NBA since BYU's offense meant he had to carry the load scoring wise.

It seems that while a lot of people loved Jimmer in college, when considering his NBA prospects most seem to either love him (saying he's Nash or Curry like) or hate him (Adam Morrison comparisons).  I see him as somewhere in between.  In fact, the closest comparison that comes to my mind is Mike Bibby.  Jimmer doesn't come with a posse and bad tattoos though.

Defense is Jimmer's weak point, but what he lacks in lateral quickness he makes up for in strength.  He won't get bullied easily by bigger NBA guards.

So while I will still be picking the overall winners, I'd like you guys to help me out with some nominees.  Here are the categories:

1. Best Natting Meme of the Year

2. StR Nickname of the Year

3. StR Rookie Commenter of the Year (must have joined after last season)

4. Dejan Bodiroga Foreign StR Commenter of the Year (Best person who posts on StR but is a fan of another team/blog)

5. The Everybody Dance Post-Game Thread GIF of the Year

6. StR Photoshop of the Year

9. Best StR Fanpost of the Year

Screw it. We're gonna end this year on a positive note.