Share All sharing options for: DeMarcus Cousins And Foul Trouble

We're going to take some hard looks at DeMarcus Cousins' rookie campaign over the next week or so. We begin with a look at foul trouble.

One of the biggest knocks on DeMarcus Cousins is that he cannot stay on the court. This isn't about his weight or conditioning, or his lack of production. The No. 1 thing that kept Cousins off the court for stretches this season was foul trouble. Having been a starter from Day 1 before bouncing off and on and the bench, Cousins was put into a position of the Sacramento Kings relying on his services. But fouls plagued him, and he become unreliable in many games, and that led to a lot of 20-minute games.

Did Cousins improve in avoiding foul trouble as the season wore? Is this something that will improve with experience and the shedding of the rookie label?

First: a walkback from that opening paragraph: conditioning and weight do have something to do with this. Lack of fitness hurts mobility, less mobility means more reaching and lunging and, in the end, hacking. So if Boogie improves his fitness this summer, that will help improve his foul rate.

But didn't it already improve over the course of the season? 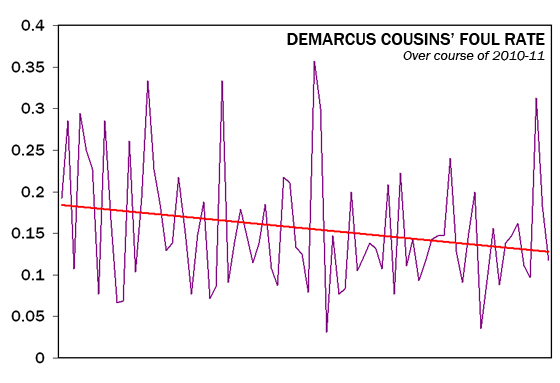 It did! Over the course of the season, Cousins decreased his fouls per minute rate.

Will time improve and experience improve it? We have one helluva test case in Jason Thompson, who led the NBA in personal fouls in his rookie season. Thompson's foul rate has not substantially improved in his three NBA seasons: 4.9, 4.3 and 4.4 per 36 minutes in each campaign. 4.4 is better than 4.9, but both are really, really high.

Nene has foul issues earlier in his career. In 2009-10 he finally broke the 4/36 minutes barrier after six seasons above it.

It took Brad Miller until his fourth season to break under the 4/36 barrier.

Charles Barkley was above 4/36 until his third season.

Kenyon Martin has seasons at 4/36 or higher, and seasons as low as 3.4. There's no rhyme or reason to his fouling history.

Shaq's progression is mad interesting: when he was young and spry, his foul rate was pretty low (3.8/36 as a rook). As he concerned himself less with fitness, his foul rate ballooned. This season it was 5.7.

The most intriguing and hope-bringing progression, to me, is that of Andrew Bynum. As a second-year player, with his first real opportunity for legit action, Bynum committed five fouls per 36 minutes ... very close to what Cousins did this year. Smarter, older and more in-tune with the NBA game, Bynum shrunk that number to 3.4 this season.

That's the type of improvement over the next few seasons Cousins needs to see in order to ensure he'll be on the floor as much as possible, given his importance to the Kings' roster.