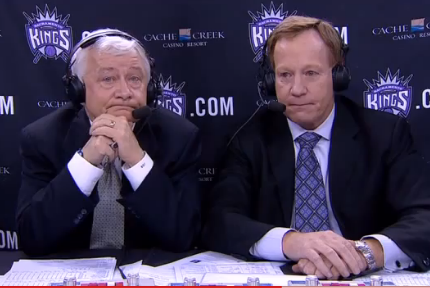 Jerry and Grant hate it when we fight.

-(We have run this in the past. Given what I have seen in the threads lately, we’re going to post this again. It's pretty much as is, with a couple of minor updates and changes.)-

About every year or so we post an article about site decorum. We usually remind everyone of some basic rules for contributing and participating here at Sactown Royalty, and we try to give some helpful hints on how to avoid the mistakes that could lead to the revoking of your StR membership.

The fine line for us is to allow the intelligence and the humor and the free-form thought that has helped shape StR, understanding that it will lead to the more than occasional thread-jack. The result is that sometimes we get off topic, but it is usually with stimulating results. But in doing that, lines are occasionally crossed and threads can dissolve into name calling matches, and we sure would like to see us clean that up a little.

We have often said that the strength of StR is that the threads often provide greater reading than the original posts. As "gifted" as the "staff" is here at Sactown Royalty, it is the members that actively participate in the threads that help make this site truly great. The threads are at times poetic, inspirational and epic. The power of the thread drives StR, and the thread must be respected and protected. The nice thing is, it really comes down to just cleaning up a couple of things –

Ixnay on the name calling – You want to call someone out or insult someone? Take it to another site. Disagree with someone’s opinion all the live-long day, but don’t insult the individual. I used to umpire, and I used to tell the players that they could say that I made a horsesh*t call, but they better not say that I was horsesh*t. Same thing applies here. In other words, it is OK hate the play, but don’t hate the player. This includes attacks on nameless or faceless individuals. Leave the "in spite of what others would tell you" bull-plop at the door, as it is a flame war just waiting to happen. If you have a point to make, make it, but do so without discrediting others. Let the conversation take its natural course. This does not mean that you cannot respond directly to a thread post. To be clear, you may disagree with someone, vehemently so if you are impassioned. But leave the personal rancor out of it. You are disagreeing with the viewpoint, not the individual.

And be careful with the racial stuff. It's always a fine line and we don't want to rule with a heavy hand. But if you think that there is a chance that someone might be insulted by the racial/religious/gender/sexual preference overtone of your comment, you might want to reconsider posting it. And if you see something that you deem inappropriate, flag it as such.

Substance counts – Forgive us for being elitist here, but if your comments have substance, they are going to get treated with more respect. For example, you may not get everyone to agree with you if you suggest that Marcus Thornton come off the bench, but if you provide reasons for your opinion it will be met with greater respect and response. If you merely state that Thornton should be benched because he stinks, well, you are entitled to your opinion. But don’t be surprised if the overwhelming backlash is that your opinion is bull-plop. If "Marcus Thornton sucks" is all you have to say, you’re going to be better off taking it to another site.

Trolling – Trolls aren’t just newbies looking to come in and hit and run. They can be folks that have been around that just wait to rile everyone up. This would be the person that says nothing while Tyreke Evans scores 25 points and grabs 8 rebounds and dishes out 7 assists, but he chimes in on the thread during each of Evans’ 3 turnovers to say, "See, he’s not a point guard." Again, you’re entitled to your opinion. But if that is going to be the only opinion that you share, you’re going to be labeled a troll. Oh, and accusing others of "group think" when you can’t get anyone to agree with you is weak. Take that to another site.

Regarding the spammers - flag, flag, flag! Please flag these as spam as you find them. As the site continues to grow, it becomes increasingly challenging to review all of the comments. Mark these comments as spam and it will make it easier for us to keep the site clean and clear of spam (Note – since we have gone to a 24 hour “waiting” period for new members, the site has been able to clean up 99% of the spam before it ever hits the pages).

There are no "Hello Kitty" backpacks at StR – Seriously, the veterans here need to lighten up a little on the newer posters. Give them an opportunity to come in and establish their voice. Like Evans, Cousins and our #7 draft pick, they are going to make mistakes. But they are also going to make this site better. Give them a break, and give them a chance. New members, on the other hand, need to remember that if they come in with no repsect for fellow StR members, they are going to receive same...and then some...in return.

Language – We’ve had conversations before about the level of profanity here, and while we would like to see less of it, it’s not really a place where we are drawing a line at this time. All that we ask is that you consider saving the really good words for when you really need them. For example, swearing because the Kings turn the ball over once = not so appropriate. Swearing because the Kings turned the ball over for the 7th time in the first 5 minutes = more appropriate. Swearing because you don’t know who Jason Thompson is on draft day is wholly appropriate (and hilarious!).

Structure - We aren’t looking for English literature majors here, but we do prefer basic sentence structure as opposed to text-style commenting. Elitist or not, your comments are going to be taken more seriously if they contain basic punctuation, spelling and grammar. You won’t get banned for poor grammar, but your comments are more likely to be disregarded. And 1 - if you have a trade idea, find the trade thread (seasonal).

No Political Statements - Flatly, the members of this site have proven that we are unable to have a civilized discussion that revolves around politics. Additionally, we have discovered that any political statements, be they obvious or veiled, usually leads to a flame war. The good news? This is not a political website. Hence, let's not discuss politics, and let's refrain from making political statements, up to and including politically charged avatars. And this is really becoming a zero tolerance item. Last week I posted a FanShot of Bin Laden watching Jimmer Fredette on TV. I assure that there was no political or religious motive to this – I was just attempting to show the global reach of “Jimermania.” But a couple of members viewed this as offensive. In the end, the cheap laughs were not worth the headaches and hurt feelings.

On the other hand, be sure to click the “recommend” button when you see a post or a comment that you really like. Enough “recs” turns the comment green or moves the FanPost/FanShot to the top of its respective column, making the best stuff easier for your fellow members to locate.

Wrapping Up - Be passionate, be learned, be funny, be firm yet flexible in your opinions, but be nice. You're all afflicted with the same disease - you're all Kings fans. Abide by the above or take it elsewhere. We've always said that StR may not be for everyone. There are those that might be happier with the looser environment that can be found at other sites. No hard feelings if you feel that the above rules are too restrictive for you.

Thanks for making this such a great site, everyone. Your participation, input, and passion are greatly appreciated.