Talking Myself Off the Ledge, One Graph at a Time

Share All sharing options for: Talking Myself Off the Ledge, One Graph at a Time

On a scale of Kenny Natt to Here We Stayed, re-acquiring John Salmons and dropping 3 spots in the draft to do so ranks as a solid Reggie Theus (that's bad in layman terms).  Salmons takes the place of Beno Udrih, a guard who has been the Kings most consistent performer over the last two years.  Yes, Salmons fits more of a need at the wing and losing Beno clears the path for Jimmer Fredette to step in, but was it worth it?

I'm not sure.  On a pure financial note, the Kings aren't hurt too bad for the next two years; Salmons only makes about $1.6 million more next season and about $800K more in 2012/13.  But Salmons also has an additional year after that for $7.6 million (which is really $8.6 million, as his last year is only $1 million guaranteed, and I don't see the team not waiving him).  Salmons is also two and a half years older than Udrih.

Still, I don't think there was any doubt that the Kings were looking to upgrade the SF spot, either by trade or in Free Agency.  For all his faults, Salmons is an upgrade to any SF the Kings currently employ, and he is a veteran who can play some defense.  But weren't their other options the Kings could have looked at this offseason to upgrade the SF spot?  How does Salmons compare to them?

For this exercise we're going to be comparing Salmons with four Unrestricted Free Agent SFs who are Veterans that the Kings could have targeted: Caron Butler, Andrei Kirilenko, Tayshaun Prince, and Shane Battier.

Let's take a look at the first chart, durability: 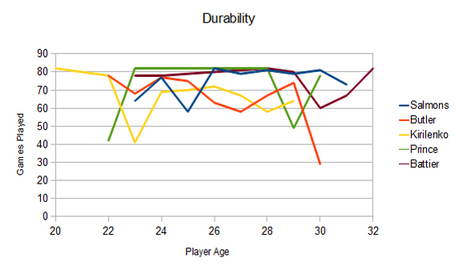 Salmons actually ranks pretty favorably here.  Over the past few seasons he hasn't had a major injury or missed too many games.  Prince also has been solid, with only one injury filled season in 2009-10 (the big dip).  Battier has been pretty durable over his career but has missed quite a few games in the last three years.  Butler and Kirilenko suffer the worst here, as both have been extremely injury prone.

Now on to Efficiency, which we're going to measure by True Shooting Percentage. 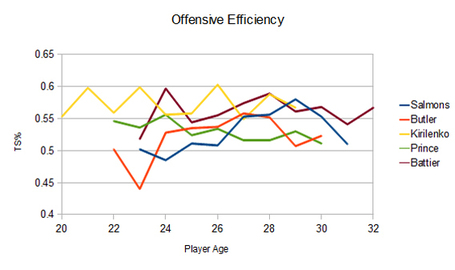 Salmons measures much less favorably here.  He hasn't been that efficient of a player throughout his career.  He has been better than two notable names on that list though in Tayshaun Prince and Caron Butler, and more importantly his career .540 TS% ranks better than Omri Casspi (.524) and Donté Greene (.491).  Salmons isn't far off Francisco Garcia's .554 either.

Speaking of spot-up shooting, let's take a look at these players Three Point Percentages, because the Kings need their wing to be able to take advantage of open opportunities from there so teams don't pack the paint on Tyreke and DeMarcus. 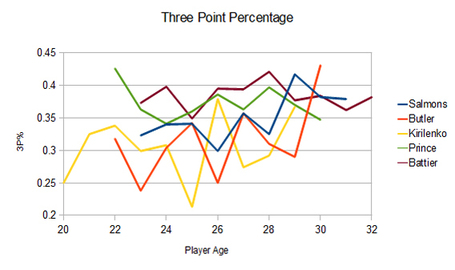 Battier wins this hands down.  He has been the most consistent long range shooter throughout his career and also has the highest average overall at a very nice 38.5%.  Salmons has improved a lot since coming to the league, and while he has been less consistent than Tayshaun Prince, he has a higher overall 3P% (at 36.9%) than Prince (36.8%) and Francisco Garcia (36.8%).  I know, huge difference.  Still, those three guys can all hit their threes, while its more of a crap shoot with Kirilenko and Butler.  Butler has a huge fluke year last year at 43.1%, but I also have to caution a very small sample size, as he only played 29 games due to injury.  His career percentage is only 31.9%.

Of the other two Kings SFs, only Casspi shoots better than Salmons, at 37.2%, which isn't much of an improvement.  Greene is a bad 32.0%.

Now let's take a look at Assist Rate.  Assist Rate, for those who don't know, is an estimate of the percentage of teammate field goals the player assisted while he was on the court. 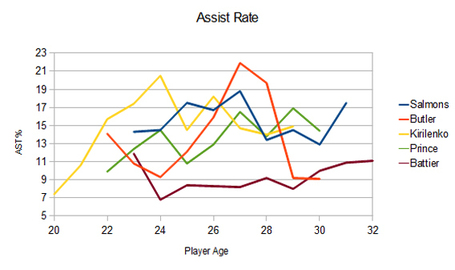 Well we don't really have any "Point Forward" types among this bunch.  Shane Battier has been the most consistent throughout his career, but he's also been the worst, hands down, with an AST% of 8.3.  Butler is really weird, as when he has been with good teams, his AST% has been low, while it was pretty high in Washington.  Salmons is the one we're interested in though and there is some good news here: Of these 5 players, Salmons has the highest career AST% at 15.4 (Kirilenko is next at 14.9 and Butler and Prince both are at 13.8).  Now this isn't super great or anything, but it also shows he isn't a complete black hole as some people think.  For example, Francisco Garcia, who is supposed to be a Point Forward type?  He only has a career AST% of 10.6.  Omri Casspi and Donté Greene are worse at 7.2 and 6.6 respectively.

But does Salmons take care of the ball when he has it? Time to check Turnover Rate (Estimate of Turnovers per 100 plays). 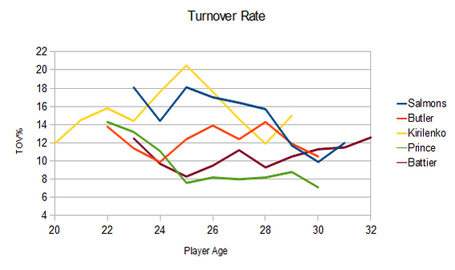 For this graph, the lower the better.  Salmons has the next to last career Turnover Rate at 13.6%, only ahead of Andrei Kirilenko's 15.4%.  Prince (9.0%) and Battier (10.7%) are by far the most careful with the ball, and Butler comes in middle of the pack at 12.5%.  None of these guys are really turnover prone.  Still, Salmons is a tad more turnover prone than any of the SFs the Kings currently have.  One comforting thing you can take from the graph was that he used to be REALLY turnover prone, but has improved steadily in this area as his career has gone on.  He probably won't have the ball in his hands as much either this time around so that should help, which brings us to our next and final graph... 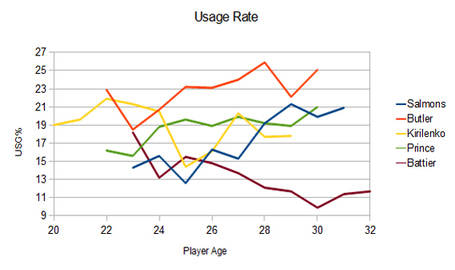 Usage Rate is an estimate of the percentage of team plays a player used while he was on the floor.  The higher the Usage Rate, the more you have the ball in your hands basically.  The Kings don't really want their Small Forward to be taking up a lot of possessions, with Tyreke Evans, Marcus Thornton, DeMarcus Cousins, and now, Jimmer Fredette all needing the ball quite a bit.

Battier is the winner here to me, as he only really uses the ball to hit spot-up shots or use a quick post move.  He doesn't do much on offense, he's in there to be a defensive stopper.  Butler is quite the opposite, as he needs the ball in his hands, and historically has had it too.  Salmons has the 2nd lowest career Usage Rate of these 5 at 18.3%, but if you look at the graph you can see that it has risen throughout his career and isn't as consistent as the other guys.  This is in part because he was playing behind Allen Iverson for the first few years of his career.  Still, he doesn't have an absurd Usage.  His Usage Rate of 20.9% last year ranks only a couple percentage points higher than Omri Casspi, Donté Greene or Francisco Garcia (all around the 18% mark).

Now we might be done with the graphs but we're not done with the analysis.  We still have to look at defense.  Defense is very hard to study statistically, so what I'm going to use here is 82games.com's Opponent Effective Field Goal % from last year.

And our current crop of SFs:

Now this set of data is our least certain for a few reasons.  One, we need context.  Look at Battier above.  He's widely regarded as an All-World Defensive Type.  If so, why did opposing SFs shoot over 51% on him? Well he only guard the opposing team's best wing player every single night.  Another reason this data is less certain is because we have  a lot less info as this is only based on one season, while yet another is that defense is much more affected by the team dynamic than offense.  If you are a worse defensive team, your defensive stats will look worse than a comparable, or even worse defender on a much better defensive team.
Still, I don't think you can dispute the fact that Salmons is a much better defender than Donté Greene, Omri Casspi or Francisco Garcia are.  This is not saying much as all three of those guys are not great defenders, and that's being nice.
So do I think the John Salmons trade is good now?  No, I still think it sucks, especially since I think Beno Udrih had more value if we truly wanted to free open some minutes for Jimmer.  But I don't think its as terrible as my expletive-laced tirades yesterday insinuated.
In Petrie I Reserve Judgement.