Did Jason Thompson Really Get Better As Season Went On?

Share All sharing options for: Did Jason Thompson Really Get Better As Season Went On?

There's a pretty consistent sentiment that Jason Thompson picked up the pieces from a 2010-11 season for the Sacramento Kings that started poorly, and that he excelled in the last half of the campaign. J.T., you'll remember, was a welcomed monster as a rookie, a massive upgrade over Mikki Moore and a welcome antidote for our passive, brittle frontcourt. Thompson isn't perfect as a big man, but he covered up a lot of holes when he arrived.

As the team has progressed, the frontcourt around him has improved; there's little question he was the fourth-best big man on the roster last year, and is the third now if Samuel Dalembert is retained. But despite of turning from salve to obvious back-up, he's a valued member of the rotation. I think we as Kings fans actually rate him pretty fairly: we know he's not an All-Star, we know he's not a scrub. He's just a solid rotation player.

Some are hoping for more, and think his performance at season's end dictate improvement. But was that improvement real?

If you look at the monthly splits for J.T., you wouldn't think there was actually much improvement going on. 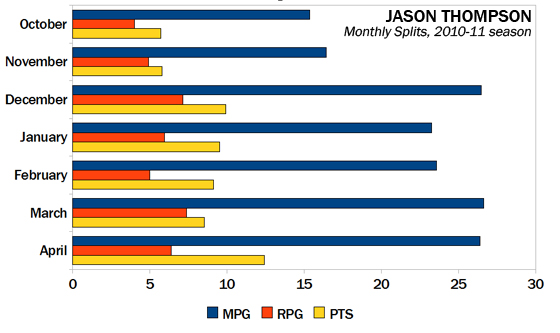 But a huge factor in J.T.'s tenure has been consistency. Did that improve over the course of the season? If so, it'd be hard to see it in monthly splits. We need to look at game-by-game data. So let's do that.

The early bits of the season for J.T. was boom or bust: he had some lovely games -- the high point a 22-14 outburst against the Wizards -- and a set of awful, invisible nights. As the season wore on, the busts were so bad, the booms weren't so great ... but everything normalized. By the end of the season, he gave a predictable, unspectacular but valuable performance every night.

There's a question of what you want from your third big man -- assuming the Kings keep Sam or acquire a starting big man to pair with DeMarcus Cousins, which is my overriding assumption on what the Kings will do. Do you want a third big man prone to spectacular outbursts paced by truly invisible games? Or do you want a steady diet of unspectacular but predictable box scores? The Kings won more down the stretch for reasons outside of Jason Thompson -- ask Marcus Thornton, Cousins' consistency and Tyreke Evans' return from injury. But there's at least the sentiment around here that the steady, unspectacular production is preferred to the boom-bust cycle. That looks like what we'll be getting from J.T. going forward ... if his new-found consistency is, uh, consistent.