This is the fourth in a five part series in which I analyze the 2011 Free Agent market by position.  As a source I used ESPN's list of 2011 NBA Free Agents and for statistics I used Basketball-Reference.  This list of Free Agents only includes players that were on a teams roster at the end of last season.  Also, please keep in mind that while I will use John Hollinger's PER (Player Efficiency Rating), this is not a be-all, end-all stat.  There are several deficiencies, particularly that it is not a reliable measure for a player's defensive acumen, so keep that in mind.

The Kings recently increased their depth at Power Forward by acquiring J.J. Hickson, but they're not necessarily finished tinkering yet.  With Samuel Dalembert an Unrestricted Free Agent, the Kings have need of another big man, especially if Sammy signs elsewhere.  A center would be preferable, but everyone knows you can't always get what you want.

Of the Kings current rotational big men, DeMarcus and JT can play both the 4 and the 5, while Hickson is strictly a 4.  If the Kings were to add another 4 to the group, it'd likely be someone they feel can pair up well with DeMarcus Cousins and offers more of a defensive presence.  A guy who can space the floor would also be nice, to complement the inside game of Tyreke and DeMarcus.

Statistics used are career averages to give a larger sample size.  Players with  ® next to their name are Restricted Free Agents.

David West is by far the best available PF on this list and one of the best available Free Agents overall.  Perhaps West's greatest attribute is his ability to hit shots from anywhere at a good rate.  If you take a look at his Shot Selection page from HoopData, you can see how absurdly good the spread is between where he shoots and how efficiently he shoots.  He likes to take a lot of shots from 16-23 feet, statistically the least efficient shot in basketball, but it works for him because he makes them at a great rate (right around 45% for the last 5 years, including 47% last year).  West is also a decent rebounder on the defensive glass (unlike the comparable Carl Landry) and a great passer for a big man.  He's also really good at staying out of Foul Trouble; His 2.9 PF per 36 min ranks him as the least foul prone big man on this list.  Defensively, he doesn't look as good.  He's not terrible, but I think it says something that New Orleans has always sought to pair him up with a defensive minded Center.

Unfortunately for West, he is coming off a torn ACL and will be 31 years old next season.  He'll get his money, but would he be a worthwhile investment for the Kings?  If we're looking short term, I think he would be.  But longer term it'd probably be wiser to invest that money in someone younger.

That someone is not Carl Landry.  Been there, done that.  It didn't work.  Moving on.

Forget Brandan Wright or Leon Powe as well.  Both might be able to help in some capacity, but they've also missed major time the last few years due to various injuries.  Earl Clark is another young guy you can forget about.  A lottery pick just two years ago, he's gone the way of Joe Alexander and might be out of the league as soon as this year if nobody signs him.

Craig Smith is the rich man's Darnell Jackson, except he shoots more around the rim.  The Kings don't really need him with JT and Hickson on board.  Jonas Jerebko is interesting, but I have limited information on him.  He can play either the 3 or the 4, is a scrappy defender and can shoot (his 3 point shooting could use improvement).  If I were to compare him to anyone it'd probably be a taller, more athletic Andres Nocioni, which isn't necessarily a bad thing.  Still, he's also coming off a knee injury that knocked him out of all last season, so we'll see how he regroups from that.  His restricted status also makes things complicated for interesting teams, especially since Detroit likes him.

Troy Murphy is a guy many people on this site are familiar with, as his name has come up often in trade discussions the last couple years, particularly when he was an expiring contract and the Kings had desperately needed a rebounding infusion.  Murphy does two things well: Rebound (mainly on the defensive glass) and shoot (.389 career 3P%).  He's also an above average passer for a big man.  Defensively he's a sieve however, and it remains to be seen how last year's back injury affects the rest of his game.  It definitely slowed him down during his limited time in Boston, and he wasn't able to have the effect the Celtics had hoped when they picked him up off the waiver wire.

Kenyon Martin is perhaps the best defensive Power Forward on the market.  He's a good shot blocker and decent rebounder, and statistically his teams have allowed less points when he's been on the floor.  Offensively Martin gets most of his buckets around the rim, and he's not a good jump shooter.  The biggest con with Martin however is the fact that he's been very injury prone throughout his career, missing almost 30% of his possible career games in 11 years.

Glen "Big Baby" Davis is overrated.  He benefited greatly from playing with Boston's veteran stars, and I have my doubts to how he'll handle playing on a team without such great veteran leaders.  Even so, he's not that great.  He's a finesse scorer despite being 6'9 and 290 lbs, and not a good rebounder or defender to boot, mainly due to his lack of athleticism, demonstrated here:

Two guys that do really interest me however are Kris Humphries and Josh McRoberts.  Humphries will probably become better known for being Mr. Kim Kardashian than anything he does on the basketball court but he's no bum either.  Humphries is very athletic, a great rebounder (on both ends of the court), and a decent shot blocker.  He gets most of his points near the basket, but he can hit a jumper as well (although he's not great at it).  McRoberts is one of the more interesting available Free Agents because of his great versatility.  He's a decent rebounder, good athlete, great passer, good shot blocker and efficient scorer (who can hit threes).

Reggie Evans is the best option on the board for rebounding purposes (where he's a beast on both ends), but he doesn't do much else, unless you count turning it over (which he does a lot of).  He has a reputation as a dirty defender, but injuries have hurt him here.  While the numbers show he was a pretty good defender through the early part of his career, he has since devolved into a minus defender.

Jason Smith and Yi Jianlian are the best of the rest in my opinion (if you exclude the way past their prime veterans who are only going to join teams with a chance at the title) and that's not saying much.  Both are primarily jump shooters, and despite reputation (Jianlian is the Chinese Nowitzki!), Smith is probably the more reliable shooter and defender.  Jianlian edges Smith out on rebounding though.  I don't really want either one on the team.

Brian Scalabrine on the other hand... 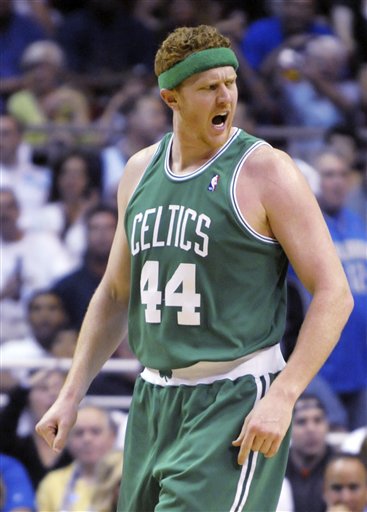 (Tomorrow we finish up by looking at the Centers)