Share All sharing options for: Jersey Sure, or How I Spent the Lockout of 2011, Episode No. 3

(The following is a collaborative effort by Sactown Royalty editors, authors, and members. The thoughts of each contributor will be preceded by their StR member name.)

section214:  It’s time for part three of our searing and soul searching series that has everyone asking, "Will this lockout never end?!?" We left off with the number 6 on Wednesday, so… 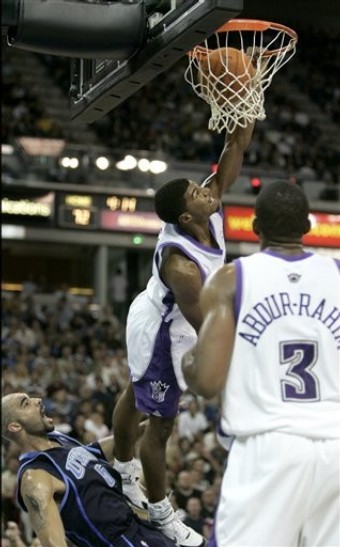 Are ya’ feelin’ me, Carlos?

Exhibit G: The number 7 is an odd lot, and difficult to place.  Based on legacy, the best should probably be Danny Ainge.  I don’t actually remember Ainge being a King, but I was 6. Actually, I think that’s about when I attended one of my first Kings games. For all I know, I may have watched Danny Ainge play basketball in person. He clearly did not leave a lasting impact on me, and as such I cannot in good conscience consider him the best number 7.

To me then, it comes down to Keon Clark or Bobby Hurley. I’m fond of Keon simply because he’s so incredibly insane. The internet obviously existed in 2003, but I wish the current internet existed during Keon’s playing days.  Can you imagine Keon Clark’s Twitter?

Ultimately, I’ll give it to Bobby. He’s our best number 7 simply for what might have been. We Kings fans are fans of perpetually unfulfilled promise, so it only seems right. Now, if you’ll excuse me, I need to go start a parody Keon Clark Twitter account.

CrownedPotential: When Keon Clark came to the Kings in 2003 he was rumored to be moving to El Dorado Hills.  My mom, being a bubbly Kings fan also from EDH, thought we should drop off some muffins at his house to welcome him to the neighborhood.  Unfortunately, we never really sought out where he lived to complete the kind offering.  Over the course of the season, though, with every blocked shot, dunk, and amazing game-winning tip in(s) my family would scream out, "KEON! Earning him some muffins!" I especially found it funny when he wasn’t playing well and my mom would chime in, "See, it’s because he didn’t get his muffins."

MustangMBS: We have a host of players I know nothing about.  Hawkins, Ainge, Askew, Wennington, and even Keon Clark do very little for me and I either remember them not or little, for the latter. More recently we have had Dahntay Jones, Ronnie Price, and Dominic McGuire.  Out of these Ronnie Price is an easy pick for me.  He just seemed to be pretty straightforward player who may lack thrills and frills, but could get it done well enough.  I do like Dahntay Jones’ defensive game a lot, but that said I didn’t see much of him here in Sac.

I really hated Danny Ainge, right up until about a week after he arrived here. What a gamer. Understanding that we later dealt him primarily as a favor to him, that was some solid tradin’ fetching Byron Irvin in return.

Magic Johnson loved Bobby Hurley coming out of college. Raved about his play against the US Olympic squad. He could have been special, but the tragic car accident basically turned him into a one-handed player that had lost a step. What might have been…

On any given night, Keon Clark had the skinniest legs of any of the 17,000+ in attendance at ARCO Arena.

Ronnie Price, major dunkage (If you listen carefully, you can hear Jerry Reynolds giggling at about the 10 second mark).

Remember how some of us wanted to re-sign Rashad McCants? Neither do I.

Aykis16:  Keon Clark has to be my favorite #7 to have played for the Kings.  He was Hassan Whiteside before being Hassan Whiteside was cool.  Apparently he was also a raging alcoholic, but I didn’t know that at the time (Fun Fact: declared that he never played a game sober.  He’s also currently in prison! The more you know…).  Still, nobody blocked shots quite like Keon the pogo-stick, and he could hit his mid-range jumpers too.  Another favorite Keon memory had to be the fact that he hit two game winners against the Mavericks in two separate games in the same season while he played for us.  That was pretty funny.

I had high hopes for Ronnie Price as well when he first came in, hoping that he could one day become the next Bobby Jackson.  He wasn’t nearly that good, but he was super athletic, and his dunk on Carlos Boozer just might be the best Kings posterization of all time (definitely top three). 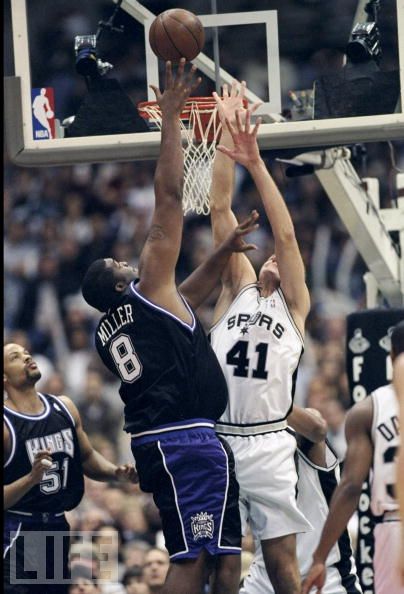 First trimester center Oliver Miller (seen here both left and center and partially right) reaches over the cylinder, desperately searching for a hot dog that Lawrence Funderburke (far left) stated was resting on the tongue of the rim.

betweentheeyes: The sweet shot making of Eddie Johnson and the punch by Antony Peeler to Kevin Garnett.

Mustang: It looks like at number 8 we have few Kings of note.  I never liked Quincy Douby or Hilton Armstrong and I just don’t know about Mateen Cleaves, before my time.  So, I am going to have to throw in a wild card here and a somewhat heretical one at that.  Doug Christie played for another team as #8 and I will have to take him as he is one of my all-time favorite players.  I had completely forgotten he had played for the [redacted].

CP: If nothing else, Mateen Cleaves taught the players of the 2002 season the best pre-game introductory warm up dance of all time. It was fun, in unison, and there was no separation between the starters warm up AND the bench players warm up.  The team that plays together dances together… or something like that.

G: From what little I know about early Kings history, Eddie Johnson is the choice here. But that’s based on hearsay, and in my heart of hearts this should be Quincy Douby. Mateen Cleaves also gets a mention for his Hall-of-Fame towel waving, smiling, and generally positive attitude.

Aykis:  Eddie Johnson has a reputation as a lights out shooter that I’m not completely sure he deserves. The only reason I say this is that his career 3P% is .335, and he only really ever had three seasons (out of 17) where he shot at an exceptional level from long range, and none with the Kings. Still, there was no doubt he was one of the best pure scorers to ever play for the Kings.

Then there was Quincy Douby, the draft pick every Kings fan brings up to prove that Geoff Petrie is after all only human and does sometimes err. By all accounts Douby was one of the best players on the team… in practice. But he had an epic case of stage fright whenever he actually got playing time and it never translated. This always surprised me, because he had no problem filling it up in college. Still, I suppose it’s not all Quincy’s fault. He had three different coaches in his three years with the Kings and none of them were good. Ah well.  We’ll always have that time he dropped 32 on the Lakers.

section: Eddie Johnson seems to be a forgotten man when it comes to Kings history. Maybe it’s because a there have been more prolific wing players in , and maybe it’s because he was only here the first couple of years. But Eddie Johnson could flat fill it up, back in a day where the 3 point shot had not yet really come into vogue.

Nice guy memory: Mateen Cleaves was the player on hand when I was given the opportunity to tour the brand new practice facility back in 2002, and he was one of the nicest guys that you would ever want to meet. Great smile, infectious laugh, and a guy that you could tell just loved the game of basketball. I still have my autographed Cleaves ball, and I still smile whenever it catches my eye.

Ziller: OK, we've got to talk about Quincy Douby. This man is a legend! He was like the reverse Ike Diogu when Reggie Theus put him through that clutch test. Remember? Theus ran potential game-winning plays for Douby -- who hardly played -- in back-to-back games? Both plays shockingly failed, and Douby was eventually waived. He's not the best Chinese point guard ever, or something. Douby was absolutely ruined by the Kings' post-Adelman coaching problems. Just imagine, he could have been Black Jimmer.

Anthony Peeler's Kings tenure was brief, but when you sock Kevin Garnett in the jaw, you are a hero. 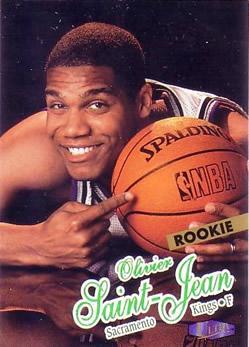 Tariq Abdul-Wahad sings all of your favorite love songs on this 2-record set, "The Rookie & The Nookie." A stack of wax that’ll take your woman to the max!

G: Since we’re focusing on the Sacramento-era, we’re left with a debate between Tariq Abdul-Wahad, Damon Jones, Kenny Thomas (K-9 woof!), Matt Barnes, or Luther Head. This might be crazy, but I think I’ll give the nod to Head (no pun intended). Technically, Tariq Abdul-Wahad was better, but Head was just the right kind of crazy for us. He was the guy who made you think, "There’s no way he should be starting, but maybe he should keep starting for us?" As a guy who is easily confused, Luther Head was an unforgettable piece of lore.

Side note: This project just resulted in me comparing and contrasting the stats and values of Tariq Abdul-Wahad and Luther Head. Look what you’ve done to us, David Stern. Just look. You monster.

Mustang: We have Matt Barnes, Luther Head, Kenny Thomas, and some guy named Henry Turner from circa 1995 that I have no clue about.  Oh, and there was a guy who had 09 from Rochester, but I think we can exclude him. I would have to take Kenny Thomas out of these three.  Talent-wise I would pick Matt who is local, but his run-in with the Police over his wife beating him up kinda excludes him IMO.  And I just can’t pick Luther, though a close second, despite all the comedic opportunities his name provided.

K-9 was always ready to play and did fairly well when he got the chance.  Adelman actually got some decent minutes out of him, but later coaches seemed at a loss in getting much out of any of the players, K-9 included.  His contract was the killer sadly enough.  I would probably have still kept a one-knee Webber over him and tried to move him later, but such is life.

section: Numero del Diablo! Numero del Diablo??? Did you realize that the number 9, turned upside down and reproduced in triplicate is 666? For crying out loud, this is like picking your favorite Maloof brother!

Tariq Abdul-Wahad was the only guy at this number to log more than 50 games with the Kings not named Kenny Thomas, so he gets the nod. That’s right. Wahad’s 7.7ppg average wins the battle at number 9. As far as Kenny Thomas is concerned, <This portion of section214’s post has been removed due to…technical difficulties.>

Aykis: Oh God.  You might have forgotten just how useless Kenny Thomas was, but we had him on the team for 6 seasons! 6 seasons!  And he made $38.9 million to mostly sit on the bench and occasionally bark.  At least guys like Luther Head and Damon Jones were on minimum contracts.

Ziller: Don't underrate how important K-9's presence was to jokes among diehard Kings fans during his tenure. Also, I once heard that Eric Musselman was in a bit of a lady-related scuffle at a Roseville bar and needed to be saved from a brawl by ... Kenny Thomas. The man is a hero.

Well, that was certainly…something. What a scintillating group of…players. Episode 4 should be out on Monday. I’m sure that things can only get better, right? 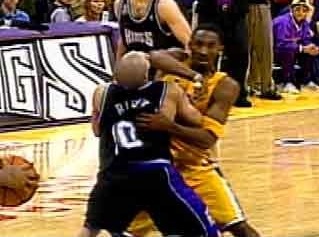