UPDATE: Grant Napear's producer Jodi Bacon, says that she, not Napear, interviewed Fredette. I stand by my sources.

The Sacramento Kings could face fines, warnings or other penalties from the NBA after Grant Napear -- the team's play-by-play broadcaster and a radio host on KHTK 1140 AM -- interviewed Kings rookie Jimmer Fredette at the American Century Championship Golf Tournament in Lake Tahoe two weeks ago. (See my disclosure at the end of this post.)

The interview didn't air on KHTK during Napear's show, and Grant hasn't mentioned Jimmer or any other players on the air since the league locked out players on July 1 and set a strict "no communication" policy for all team employees. During a lockout, the NBA does not allow any team employees -- even if that employee is a team broadcaster -- to have contact with players. That means that contact with players not previously cleared by the NBA is prohibited and subject to penalty. Two teams have reportedly been fined (possibly up to $1 million) by the NBA for transgressions.

Given that Napear is just the TV broadcaster for the team and not a decision-maker, it would seem to be no big deal for him to interview Fredette. But the fact that his show didn't air the big interview and that Yahoo!'s Mike Silver (a frequent guest on Napear's show) wrote about Napear's plight -- emphasizing that Grant wasn't able to interview Fredette while the rook appeared on rival stations -- implies that someone involved in the show knew that the interview would violate or test the admittedly silly "no communication" rules. I have not been able to get in touch with anyone from Grant's show to ascertain whether this was a misunderstanding of the NBA's rules or a deliberate attempt to get around them.

In response to an inquiry about the interview, the Kings' excellent PR director Chris Clark said:

All team employees have been instructed by the league to refrain from conversation with players or their representatives until a new collective bargaining agreement is reached.

That said, I'm not in a position to judge whether Grant violated any NBA sanctions currently in place.

Two photos of Jimmer sitting at Napear's interview table were posted to The Grant Napear Show Facebook page. One, below, carries the caption "He who shall not be named." Napear also discusses Fredette (without mentioning his name) at the beginning of his interview with Marshall Faulk at the ACC. Fredette was apparently leaving the KHTK table as Faulk sat down. 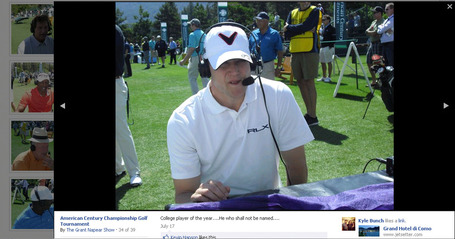 Full disclosure: Grant Napear and I are not keen on each other, as regular readers well know. Also, I think the "no communication" rule is a joke beyond front office staff, coaches and owners. Napear should be allowed to interview as many NBA players as he wants on his radio show, which is not directly tied to the Kings or NBA. He should be able to talk about them, he should be able to mention their names. There's a difference between a play-by-play guy interviewing a player on a radio show and a general manager talking about players in a press conference. The rule as constructed is bad.

But the NBA has made the rule pretty clear, and Napear put the franchise at risk of penalty ... for an interview that hasn't yet and may never air.