Every Season Review Countdown, No. 25: '90-91 Is All Rookies Everything

Share All sharing options for: Every Season Review Countdown, No. 25: '90-91 Is All Rookies Everything 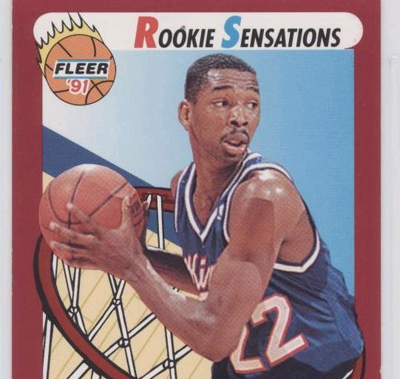 We're counting down the Sacramento Kings' 26 seasons from most depressing to most awesome.

The Sacramento Kings carried with them to the 1990-91 season an incredible five rookies. (The team signed a sixth -- Tony Dawson -- to a 10-day in March, but I'm not including him.) Considering how awful the team was in 1989-90 -- a season we rate as the team's most depressing ever -- this could be seen as a good thing.

But then you look at the rookie the Kings brought in, and ...

Lionel Simmons: The No. 7 pick. We'll come back to him.

Anthony Bonner: The Kings took Bonner with the No. 23 pick, acquired in the Pervis Ellison deal. Bonner was the best player the Kings got in that deal. That's how bad Pervis and the trade were. Bonner played six seasons and started almost half the time. He never hit a 10-ppg average. The Kings waived him after three years.

Travis Mays: For all the fun we make of Caus, Mays was actually a worse player picked four spots higher. Mays had just one season in Sacramento, a 14 ppg campaign that landed him on second-team All Rookie. The Kings proceeded to sell high and trade him to Atlanta for Spud Webb. Landing on a team with actual good players, Mays faded away and was out of the league two years later.

Undrafted free agent who disappointed at Bob Knight's Indiana, transferred to Kansas and fell out of the public consciousness. He was about the quality you'd expect from an undrafted free agent. He lasted 64 games.

By all accounts, L-Train will finish in the top 20 (if not 15) in our all-time Sacramento Kings' rankings. He spent all seven seasons of his career in Sacramento; by all accounts, he's the most prominent Sacramento Kings-only player in team history. (Let's hope Tyreke, DeMarcus, Jimmer and J.T. leap over him. Donté, too.) He made first-team All-Rookie by averaging 18 points and 8.8 rebounds, he stayed above 15/7 for the first four seasons of his career until injuries ravaged his knees. While Derrick Coleman (the No. 1 pick) took Rookie of the Year, perhaps no '91 rookie looked more promising than L-Train. And we got him at No. 7! (Gary Payton, the No. 2 pick, ended up as the best rookie of this class. Toni Kukoc, Kendall Gill and Antonio Davis were the other impact players, in addition to Coleman. Needless to say, Sacramento could have done much worse.)

So why was this season so depressing, when the Kings had such a promising rookie?

That was all that the team had. Everything.

That magnificent opportunity for growth through the draft with, in the end, four first-round picks ... and the team got a total of one player who be in a good team's rotation. Wayman Tisdale, the team's other solid player, spent half the season injured. Antoine Carr was the leading scorer. After those two and L-Train, the rest of the team was a drain, mostly unfit for NBA competition. Bill Wennington (27 this season) went on to win some rings with the Bulls, though in a totally auxiliary role. (In '96 and '98, he averaged 8.4 minutes per game in the playoffs. He didn't play a second in the '97 playoffs.) The rest of the roster? Jim Les, Rory Sparrow, Leon Wood, Bob Hansen ... just a thunderstorm of mediocrity.

And it showed. The Kings finished with the third-worst record in the entire NBA. Three of the four 1989 expansion teams had better records than the Kings. The team went 1-40 on the road (a record, that) and lost its last 37 away from ARCO. Sacramento opened the season with a seven-game losing streak. After a win over the Bullets, they dropped another six to go 1-13 on the season. By New Year's, Sacramento was 6-21. At All-Star break: 13-32. Then a nine-game losing streak. Eventually: a 25-57 season.

Thank the Heavens, for a solution would finally arrive that summer. And yes, I'm talking about Dwayne Schintzius.