Share All sharing options for: Jersey Sure, or How I Spent the Lockout of 2011, Episode No. 9 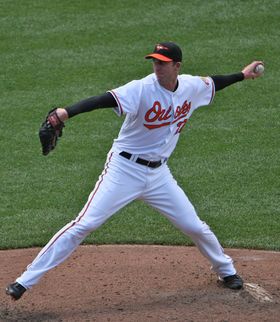 Mark Hendrickson is one of two Sacramento Kings to have also played Major League Baseball. For 50 Ziller Bucks, name the other player (answer found in #40 recap).

section214: Welcome to Episode No. 9! It would be impossible for the next player to follow the magic that was Joe Kleine, and perhaps that is the reason that no one has ever worn the numbers 36, 37, 38 or 39 in Sacramento. So we begin today’s journey at number 40. 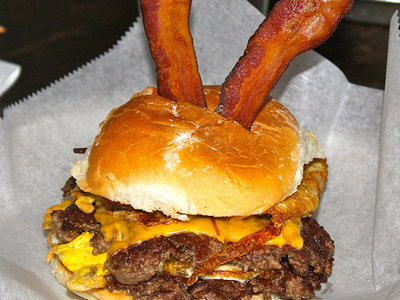 The Brockness Burger, named for and inspired by Jon Brockman.

betweentheeyes: Mr. Jon Brockman. The Brokenness Monster (did Shaq coin that?); Nessie is proof that heart, very good athleticism and very good BBIQ are not enough.

Jon Brockman aka Mancakes aka The Brock Ness Monster wasn't even the best to wear this number. That honor goes to Terry Tyler, who played with the Kings for a couple years in the late 80s.

Still, Jon was a fan favorite in his short time here for his rebounding, hustle and toughness. He was a crucial driving force in the miracle comeback against Chicago as well. I'll also never forget that a nickname I created on Sactown Royalty ended up being spread by Jerry Reynolds (and then blatantly claimed by Shaq) and used as a marketing campaign by the Kings themselves.

section: As much as I loved Brockman, I’m going with Terry Tyler here. Tyler was similar to the young Gerald Wallace in that he had hops-a-plenty but an inconsistent perimeter game. He was also a virtual non-factor when it came to the passing game, averaging less than assist per contest. But TT provided me with one of the truly great memories of fanship/friendship, and it went something like this:

In the Kings 2nd season here (and last at ARCO I), they hosted the Denver Nuggets in early January. I had tickets for the game, and I took some longtime friends with me, one of whom was visiting from Chicago. The Kings carried an 8 point lead into the fourth quarter, and they kept it around 10-12 points for most of the quarter. Inside of two minutes now, the game is in hand (Kings 108, Nuggets 96 at the moment) and the place is still packed and going absolutely crazy as the 9-22 Kings are about to beat the 13-20 Nuggets. My buddy from Chicago mentioned how impressed he was by the rabid fans, and one of my other friends said, "Yeah, that’s what makes Sacramento so special. There are no fly-by-night fans here. They stay to the end no matter what…regardless of the score or circumstances. All 48 minutes, baby! Not like you big city boys." At about this time Tyler strokes a 15 foot baseline jumper, and the Kings hit 110 points, which puts into play the rarely utilized "110 and win" promotion, where every fan gets a free Whopper from Burger King if the team scores at least 110 points and manages to win the game (I can assure you that Burger King did not exactly go broke sponsoring this promotion). As Tyler’s shot settles in the net, the crowd screams "WHOPPERS!," and the place empties out as though a bomb threat had been phoned in, while a minute or so remains on the clock. The look on my bragging friend’s face was just priceless, and my buddy from Chicago finally stopped laughing about two weeks ago. Good friends, good times. Thanks, Terry! 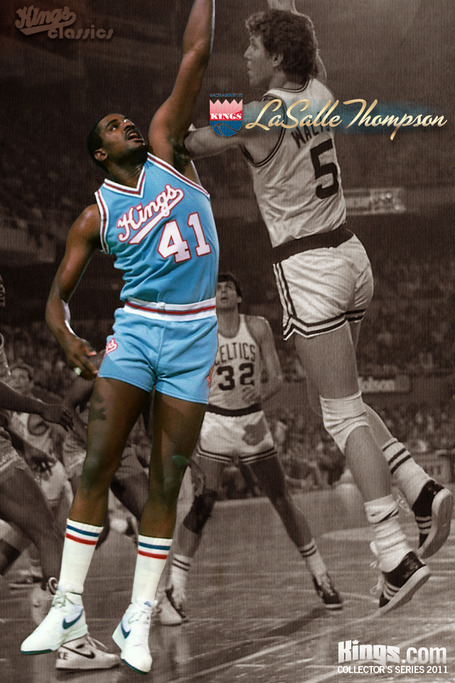 Yes, every Boston Celtic of the late 80’s was sepia color.

bte: Darnell Jackson – Jon Brockman without the energy but with size and a decent enough jump shot makes him 40 + 1.

section: Thompson was listed at 6-10 but I remember Tank being more like 6-7 or 6-8, an undersized center that was tough as nails, our very own version of Wes Unseld. He was the best center Sacramento had seen prior to the arrival of Divac, and is probably still the 3rd best center in Sacramento history. And one thing about LaSalle Thompson - he would lay the wood to anyone that ventured into the lane.

This is LaSalle "Tank" Thompson's number. Thompson was a member of the original Sacramento team, being drafted by Kansas City a few years prior. He was a phenomenal rebounder and up until Vlade joined the team, probably the best Center in the Sacramento-era.

Darnell Jackson wore it last year and I was impressed by his ability to come in and make an impact in his few minutes on the court. He wasn't nearly the rebounder (in fact he was pretty terrible at it) that Jon Brockman was the year before, but I think he was just as good if not better, thanks to his ability to actually hit the open shot, as well as to play tough defense. 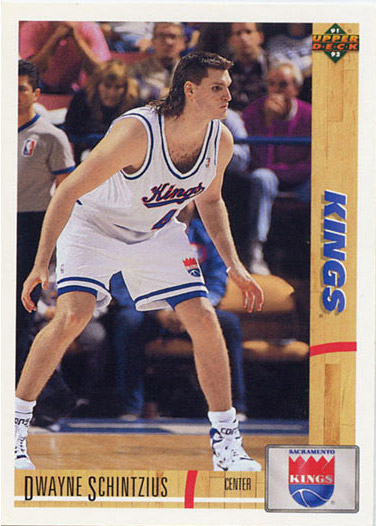 I’ll put this as simply as I can – The mullet was the best thing about Dwayne Schintzius’ game.

Aykis: Even when the Kings get lucky, they don't really. That's what happened in 1989 when the Kings won the lottery for the first and only time in Franchise history. Unfortunately, it was one of the worst drafts in NBA history. Pervis Ellison was Sacramento's Greg Oden, a very talented big man seen as the top pick in the draft who didn't play anywhere near his potential due to injuries. He was traded after only one injury plagued season. He showed glimpses of the potential he was drafted for in his 3rd season when he won Most Improved Player after averaging 20 points, 11 rebounds, 3 assists and 2.7 blocks but it was all downhill from there. It's a shame, because he could have been great.

In Jersey Sure Ep. 8 I submitted that trading Antoine Carr to get Dwayne Schintzius was one of the worst trades in Kings history. I stand by that.

From what little I know of Walt Williams, he was a rich man's Donté Greene who actually shot enough to put up decent numbers.

Bonzi Wells is memorable for a few reasons. The first is his great level of play both to help get the Kings into the playoffs in 2006, and the 2nd is for going bonkers in the playoffs against the Spurs, which might have been an upset if a couple shots hadn't gone in from the Spurs. When I say Bonzi went bonkers, I'm not exaggerating; He averaged 23.2 points on almost 61% shooting (62.5% from three!), 12 boards, and 1.3 assists. Other than the assists, that was well above his season and even career averages. That performance got him an outrageous 5 year contract offer from Geoff Petrie that he surprisingly turned down thankfully. He ended up getting much less after he realized other GMs weren't as foolhardy with their money and it ended up costing him somewhere in the realm of $30 million. If he had accepted that contract, Bonzi would have been an expiring contract this year in a likely Kenny Thomas situation, as injuries have stopped him from playing since 2008.

I thought Sean May played hard whenever he was on the court here and also got into really good shape to even make the team. He also inspired a LeBron Free Agency spoof in the Sean Maydar that I really enjoyed creating.

section: What a wacky number this one is. Mike Woodson wore it first, before being shipped to the Clippers as part of the infamous Derek Smith deal.

With the 1st pick of the 1989 draft, the Sacramento Kings select Pervis Ellison, center, University of Louisville. Yes, it was a painfully thin draft, and the best prospects (Sean Elliott and Glen Rice) were wing players, and the Kings were looking to go big (others considered included Danny Ferry and Stacey King). But by the time Ellison gimped his way through 34 games for the Kings in his rookie year, he could only fetch Bobby Hansen, Erick Leckner, the 23rd pick in the ’90 draft (Anthony Bonner), and a couple of 2nd round picks that never made a dent. Some teams land Tim Duncan with the #1 pick, and others wind up with Kwame Brown. The selection of Pervis Ellison set the Kings franchise back several years.

Dwayne Schintzius. 7-1, 260 lbs. Not bad athletically. He had little desire to become a real NBA basketball player, but being seven feet tall will get you a few years of NBA service time. Dwayne "excelled" for the Kings, besting his career averages of 2.7ppg and 2.5rpg by posting 3.3ppg and 3.6rpg in his 33 games here. His presence in late 1991 / early 1992 summed up the woes of the franchise.

Walt Williams was bound and determined to find night life in Sacramento, even if it meant staying out all night, every night. Honestly, no Kings player has ever been sighted in more local nightclubs more often than the Wizard. When he was drafted out of Maryland, the hope was that he would become a go-to guy for the Kings, and he had a couple of decent seasons. But he never really developed into a consistent performer over his 200+ games here, especially late in games, and he was eventually dealt for Billy Owens (yuck!). That said, Williams is probably my favorite at this number, besting the 52 games that Bonzi Wells logged here.

Mark Hendrickson played in 114 NBA games over four seasons before becoming a fulltime major league pitcher. He played 48 of those games for the Kings in 1997-98. The other King to have also played major league baseball? Danny Ainge.

Bonzi Wells turned his back on a five year, $35-37m contract, as he desired to "test the market." Geoff Petrie wasn’t going to wait around, and GP snatched up John Salmons just before Salmons was to sign with Toronto. Wells was left with no real offers, and he signed a small deal with the Houston Rockets. By my estimates Wells made about $6m over the life of the contract that the Kings had offered him. Ouch, babe. And it’s too bad that it worked out that way for Bonzi, because in the latter part of the 2005-06 season, he and Ron Artest picked the Kings up, turned them around, and led them to the playoffs for the last time to date, giving the San Antonio Spurs all they could handle before bowing out in six games. It could have turned out so differently for Bonzi…but it didn’t.

Sean May was the big butt of a lot of weight jokes around here (see, I did it again!). He averaged 3 and 2 in 37 games. But every minute that he played was a minute that Kenny Thomas didn’t, so that’s something, right? Right? 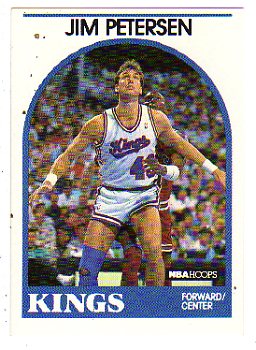 In perhaps the most overstated and overblown trade in Sacramento Kings history, Jim Petersen’s bad knees were traded to the Golden State Warriors for Ralph Sampson’s worse (and slightly more expensive) bad knees.

section: This is another number that Derek Smith wore for a season…won’t…wash…off! Jim Petersen wasn’t bad in his one season here, averaging 10 and 6 with a block per game. He was traded for Ralph Sampson (I’ll explore this more at #50), and after averaging about 4 and 3 for the Dubs he ultimately retired due to bad knees.

My choices here are between Jim Petersen and Peter Luma. Considering "Petaluma" (I totally just came up with that) only played 2 games and 5 minutes, I'll give the edge to Petersen although I have no idea who he is. The only image that comes to mind is the guy that owns Folsom Lake Ford, Chuck Peterson.

The number 44 was retired in honor of Sam Lacey, and has never been worn in Sacramento.

section: Have a great weekend. Monday is just around the corner, and with it Episode 10, beginning with the exploration of the #45. In honor of that, the poll to end all polls -