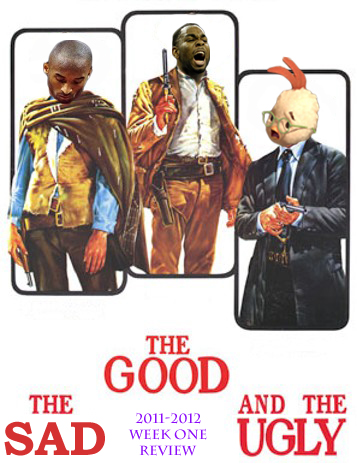 I revel in your tears, Mr. Bryant. Revel.

This has not been the start most Kings fans have envisioned, especially after a great win to start the season. Three straight losses that haven't even really been close going into a grueling stretch. I am glad to say goodbye to 2011, because it sucked.

What a great way to start the season. Against the Lakers, at home, and with a win in a sellout. Eight months ago, very few people thought this day would come, yet it did. The team put together one of the best 48-minute stretches I've seen them play in a couple years on both ends of the court, and the result was that the team was in control the entire game. I also thought the blackout was a lot of fun, and while there were the usual Lakers fans there, there weren't nearly as many as in years past. It was also the first Lakers-Kings game I've ever been to, and when Marcus hit the dagger with a minute left, it just added to my joy to see a slow trickle of yellow shirts and jerseys leaving the stands. Just a fun, fun game.

Chuck is definitely still getting into game shape, but he's been great on the defensive end and the glass so far. Unfortunately, we can't put Chuck's passion and defensive knowledge in all of our players, but he's looking like a good pick up so far.

4. Getting to the Line

Even though the Kings haven't been making them, they've been doing a good job of actually getting to the line, averaging 33 FTA a game.

The New York game proved we still have a lot of work to do to become a good defensive team, but I thought that in the three other games, our defense in the halfcourt was much improved from years past. Chuck Hayes has been a nice presence there, and DeMarcus is doing a phenomenal job at establishing position for charges.

Aside from the New York game where Jimmer was missing everything he jacked up, I thought he showed steady improvement over the first three games, appearing more and more confident. Isaiah has been a breath of fresh air at times and probably should be playing more (even if it comes at the cost of Jimmer time). He's even proven to be an asset on the defensive end, having been called to guard Kobe and Rose at times, and being somewhat effective while doing it. I also love the fast pace tempo he sets. Some of our more "experienced" players could do by following Isaiah's example.

7. Jason Thompson and a little bit of J.J. Hickson

So far, the backup bench big minutes have been filled by JT and JJ. Jason has been the most effective to date offensively and defensively, while JJ has done a better job mopping up on the glass. Neither one has really stood out yet, but I'd have to give the edge right now to JT.

I don't know about you, but the John Salmons trade still isn't sitting well with me. He was brought here to play defense and make the occasional shot. His defense has been alright, but he's been much too similar to the John Salmons of old in terms of soaking up offensive possessions. Is he an upgrade over what we've had the last few years? Sure, probably. But he's not much better. Outlaw has also been a relative non-factor, hitting just 2 of the 13 shots he's taken. Donté probably had the best stint out of any SF to play for us this week, which is saying something.

I am not of the mind to be calling for trading Tyreke or even shopping him, but he hasn't been wowing us this year, which was supposed to be his bounceback year. He's completely healthy, and yet at times it still looks like he's playing injured. He still makes the same silly decisions, and has trouble passing on fastbreaks, and is currently suffering a bout of Shaq-itis at the line. He has so much potential in this league, but he needs to learn some new tricks and evolve as a player, because the league has largely figured him out. Defensively I've actually been mostly pleased with Tyreke, even though he has some bad habits like gambling that he still does.

Given how relatively poor to terrible the production has been at the Small Forward position, it's really weird that Francisco Garcia has not seen a minute of floor time yet. I'm not saying he's the solution, and maybe part of it is the fact that we know what we have there and trying to see what the new guys can do, but so far the new guys haven't been able to do much that Cisco can't do.

Right now, listening to post-game comments from the past couple games, it does not seem like there is the greatest mood in the locker room. It does seem that Westphal may be losing his players. I do not know if this is the case, or if it's just a case of frustration setting in, but the mood is dark, and I don't like it.

There has been a lot of overreaction this week to the Kings struggles. After the loss to the New York game, I myself became very, very frustrated. But the season is still really early and there have been some extraordinary circumstances leading to this year. I am not saying that the players, the coaches, or even the front office is without fault. I'm merely saying that 4 games into such a season is not a big enough sample size to advocate making wholesale changes. If the team keeps playing this way though, then something will need to be done.

Aside from the New York game, where it seemed like this was the one area they actually concentrated on, the Kings have been getting killed in transition, allowing the other team to get easy buckets. The bad thing about letting teams score in transition is that they have to expend less effort on the offensive end, and can spend more effort on the defensive end.

Just unacceptable. No Amar'e Stoudemire, little depth, and they blew us out at home. We are a more talented team than the Knicks who played that night. But we got our asses handed to us.

As in there isn't any. In the short training camp and pre-season we did have, all we heard was about how much more ball movement the Kings would have this year. Instead, we're worse than ever, standing around a lot, over-dribbling, the works. We are dead last in the league on assisted baskets, because too many of our guys are trying to score on their own. The problem is not the fact that we don't have a prototypical point guard, it's that we aren't sharing the ball. Look at New York, another team without a prototypical point guard and they were moving the ball well, getting everyone involved and looking at good, open shots.

Just terrible. I like that DeMarcus has been taking it inside more, but for one reason or the other he just can't seem to finish. He's currently 17 of 53 (32%), with an even higher Usage rate than last year. That's appalling.

Over 4 games, the Kings have shot 61% from the line. 81 of 132 attempts. Hitting just 75% would be 19 extra points over those games. The frustrating part is that it is the guys who normally hit free throws well that are struggling. Tyreke Evans is under 50% from the line so far.

Marcus has had his share of faults this week as well, but he has been by far the Kings most consistent scorer and shooter. The bad part is the Kings rarely seem to run many plays for him despite this. Most of the shots Marcus makes, he's having to create on his own. As of now, Marcus Thornton is the best player on his team, and the offensive sets need to start taking advantage of that fact

C-Webb used to put up some Perkins type numbers just a few years ago.

That's why he retired.

"The book is pretty good, but what I really enjoy is pointing at my penis."

"Twas the night before Christmas, and all through the house..." 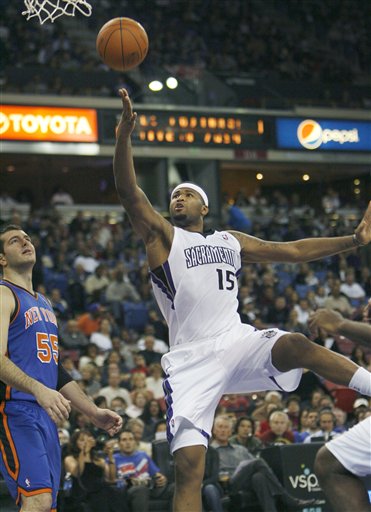 This week's caption contest winner gets to shoot two free throws for the Kings the next time they make it to the line. Can't hurt.

With 2011 wrapping up, what was the Highlight of the year for you Kings wise?

For me, it had to be at the home opener, when Marcus hit the dagger, and the trickle of yellow from the stands as the Lakers fans left. That game really made me appreciate the fact that the Kings are back in Sacramento, hopefully to stay. Now I just wish they'd give me more reasons.

v. New Orleans 1/1 W (This is the first likely lottery team the Kings have played all season, and if they can't bounce back from this loss to New York and take care of business at home against a team they should beat, likely without their best player in Eric Gordon, heads will roll.)

@ Memphis 1/3 L (Thus begins a crappy stretch for us, our only back-to-back-to-back of the year. Memphis is a very good team, and they match up very well with us.)

@ Denver 1/4 L (Every team we play on this b2b2b has a day of rest before playing us while we just get more progressively tired and also have to play in the Mile High city. This one could get ugly)

v Milwaukee 1/5 L (The 3rd game in a row is probably our best chance to win, funnily enough, but I think fatigue will cost us this game unfortunately. I hope to be wrong.)

Nostradumbass Record for the Season 3-1