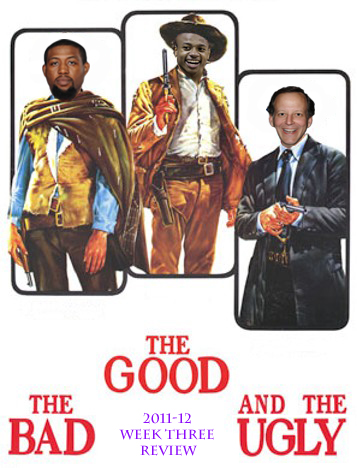 Five games in one week, and the Kings only manage to win one. Along the way we had two competitive losses as well as two blowouts, one which set some records for futility. If you've been a Kings fan these last few years, this isn't anything new.

Isaiah came in this week and proved that he can be a good player in the NBA. He plays scrappy defense, distributes the ball well, and really sets a nice tempo. His shot still isn't consistent, but he takes good shots for the most part. I'm looking forward to seeing more of Isaiah.

Both teams probably came in thinking that this was a game they should win. Luckily for us, it was the Kings who ended up victorious, and it was in large part due to the play of DeMarcus Cousins, Isaiah Thomas and Tyreke Evans. Those three carried the team during this game, with Cousins killing it inside and on the glass, Tyreke getting to the line, and Isaiah providing a burst of energy and a scoring punch. The game was tied going into the 4th, and the Kings managed to close out a game that in previous years they might have lost.

5 games this week, 4 double-doubles. Aside from the game against Houston where he got shut down by a cold and Dalembert, DeMarcus is establishing himself as one of the best young centers in the league, especially on defense, where he is making a significant impact. He still has a lot of work to do, but I love seeing the improvement all-around from him. Even his on-court demeanor has significantly improved as he is no longer protesting every foul or non-foul that is called.

Donté has come in off the bench and provided some quality defense and is actually rebounding well for a change (almost double the rate of his career). He still isn't shooting consistently (almost nobody on the team has), but he's provided good energy off the bench.

Jason has been our most efficient big by far this year, and the only Kings player to be shooting above 50% from the field. He went 17 of 27 (62.9%) this week and probably should be starting ahead of J.J. Hickson at this point.

I think the Kings would have won another game if they had a healthy Thornton. Nobody really replaced his production while he was gone, and when he came back against Dallas, he didn't play well. Hopefully he'll be fully healthy Monday against Minnesota.

That trade isn't looking all that great right now. Hickson has great athleticism, energy and is a tenacious rebounder. That's about all he offers though, as he has almost no post-game (he faces up 95% of the time), his shot is terrible off the dribble (and he takes almost all his shots off the dribble), and his defense is porous. I would have him come off the bench to provide energy, because we need consistency in the starting lineup and he hasn't provided that.

Outlaw has played himself out of the rotation, and for good reason too. Garcia has largely replaced him, and he hasn't been much better. Both guys are having a really tough time hitting their shots despite being good shooters for their career.

The Kings had 17 assists against Houston this week. That was a season high. Some of this has to do with guys just not hitting their shots, but most of it is because the ball simply isn't moving as much as it needs to. Jerry Reynolds talked about the need to make the extra pass, and so far, the Kings aren't making the extra pass.

The Kings got beat in every single quarter of this game, but really broke out in the 2nd half. The offense was stagnant, and the defense was even worse. Philadelphia was getting everything they wanted inside or out, and showcased how a team plays basketball, getting 30 assists on 47 made baskets.

2. Even Worse Blowout in Dallas

I fortunately did not have to watch this game. Franchise low 23 points in a half, 60 points in the game, 25.6% shooting from the field. Just flat out embarrassing.

Right now, Jimmer is playing terribly. He's being asked to play the role of point guard, a role he's clearly not comfortable in, and he also seems tentative on offense. Speaking of his offense, that was the one part of the game that he was supposed to excel at, but his shooting has been horrid to date. This week, he shot 8-30 overall (26.7%) and 4-15 from 3 (also 26.7%). If anything his supposed weakness, his defense, has been better than his offense. Despite putting him in the Ugly column this week, I'm not too worried about Jimmer just yet. It's his rookie year, he's in a shooting slump, and has had very little practice time thanks to the lockout.

John's 8 points on 7 shots to go with 7 boards and 3 assists was his best performance of the year. That's how bad he's been. His shooting has been way off (0-15 from 3 this week) and his defense has been iffy to say the least. Hopefully the Dallas game shook him out of this slump he's been in, and that becomes that game's redeeming quality.

This looks like yet another lost year to rebuilding, with the playoffs a year or two away. We seem to keep going through this process year after year. I'll respect Geoff Petrie forever for his draft prowess and for assembling the best team in Kings history, but right now it looks like that is the only reason why he still has a job. The talent continues to not mesh, and the moves that have been have not worked out for the most part. I do believe there is a financial aspect to this, and that won't be rectified until the Maloofs either open up the pocketbook or sell the team to someone who will.

I'm discounting the horrendous performance against Dallas, because everyone had a horrendous performance against Dallas. Aside from that game however, Tyreke has been playing like a star, much more explosive and also more comfortable with his jumper. He still probably shoots it too much for how often it goes in, but there has been a definite improvement in his shot. He also is playing much better in transition, finding teammates on fastbreaks regularly, which has been a bugaboo with him. His defense has also been excellent. There have been a lot of promising signs from Tyreke ever since Keith Smart took over, and I hope this signals genuine improvement and not just a flash in the pan.

on our way to becoming a RUNNING team

Comment of the Week: (In response to me saying Dragic is a more athletic Beno)

And in other news!!

It's the "offense", not the talent. Now in Pictures. - By SPTSJUNKIE (A great look at how poor the Kings offense is)

"Throw out your hands! Stick out your tush! Hands on your hips, Give them a push!You'll be surprised You're doing the French Mistake! VOILA!! "

Paul....what are you doing with that knife? I SWEAR, I found out the same time you did 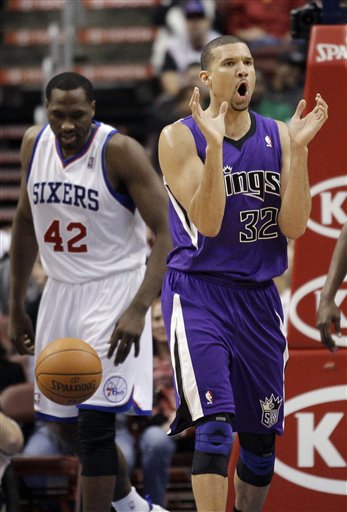 This week's caption contest winner gets to start at Small Forward.

Should Keith Smart make a rotational change? He's been keeping the same lineup since taking over and I feel it's time to start bring Salmons off the bench and start Donté or Francisco. I also think that Isaiah deserves to be the team's third guard over Jimmer at this point, until Jimmer does something to earn more minutes. I would also play JT ahead of J.J. Hickson since Jason is more efficient, a better defender, and a better passer.

@ Minnesota 1/16 W (Minnesota is a young and exciting team with a good coach. I'm hoping the Kings have some oomph in their step after being just embarrassed in Dallas.)

@ San Antonio 1/20 L (San Antonio is still a great team, with more youth than you would think. I just hope this doesn't get ugly.)

@ Memphis 1/21 L (This game will be more competitive than the last one in Memphis, but I fear the same result)

Nostradumbass Record for the Season: 10-3