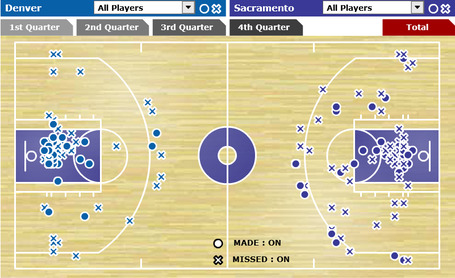 I am not ashamed to admit that I left this game early in the 4th quarter, after seeing the Kings come out lackluster and the Nuggets playing like the team that was down by 30, needing to make a run. This was just a flat out embarrassing loss.

The story of the night was the Kings porous defense and Denver's superb job of attacking the paint. That shot chart is not lying: Only two of Denver's two point field goals came outside of the paint, and just four total field goals came outside the paint. Denver scored a ludicrous 92 points in the paint, the most since the statistic started being recorded in 2000-01, and almost more than the entire Kings point total. In fact, it wasn't until midway through the 4th quarter that the Nuggets even made a two pointer outside of the paint, which goes to show how dominant they were.

Danilo Gallinari led the Nuggets in scoring with a game-high 23 points, 21 of which came in the first half. Six other Nuggets players scored in double digits and Chris Andersen came close himself with 9. Denver had 29 assists to just 13 turnovers, 8 blocks and 10 steals. They also killed the Kings on the boards, 48-35, with the Kings once again allowing the better shooting team a bunch of offensive rebounds (17).

Sacramento was led in scoring by Jimmer Fredette, who got the start for the injured Marcus Thornton. Jimmer had 19 points on 6-13 shooting, including 5-8 from three. DeMarcus Cousins had another double-double with 17 points and 15 rebounds, and Isaiah Thomas had 16 points and 6 assists off the bench.

The game started out relatively competitive, with the Nuggets only leading by 6 after the first quarter. It was during the 2nd quarter where things got sour. Basketball is a game of runs, and these Kings have a very bad habit of letting their opponents go on huge runs that they never recover from. In the 2nd quarter, Denver went on a 25-6 run over the last half of the quarter, and the Kings only points during that stretch came at the line. That's 6 minutes and 52 seconds the team went without a single field goal.

The second half wasn't much better. Sacramento's first possession of the third quarter resulted in a rare 5 second inbound violation and a turnover. Denver would go on to score the first 8 points of the half and extend the lead to 29. It wasn't until the 9:07 mark that the Kings finally scored on a Tyreke Evans jumper, making it a full 9 minutes and 45 seconds in game time that the Kings went without a made field goal, on their home floor.

If I was Keith Smart, I'd spend tomorrow watching the game film, not to show the mistakes the Kings made, but to analyze how the Denver Nuggets played and learn from them. Denver is a very good team, and they have become so by playing like a team. Everyone on the court for Denver plays unselfish, and its very rare to see them take a possession where they don't pass the ball multiple times, and very quickly. They were decisive and quick about their passes, only dribbling when necessary and rarely settling for anything but the best shot. Meanwhile, the Kings take forever to get into their offense, and when they do pass they are tentative and sloppy, often making things harder than they need to be. There's also very little off the ball movement from Sacramento, while the Nuggets did a great job of cutting towards the basket, and more importantly finding those cutters for the easy layups when they did.

On an individual basis, the Kings wings continue to be just putrid. John Salmons scored just 5 points on 6 shots, and always seems to take his shots out of the flow of the offense. Francisco Garcia didn't hit a shot in 13 minutes, and Donté had 5 points on 5 shots.

Tyreke Evans continues to play the distributor role well, with 7 assists, but continues to struggle with his offense, scoring just 13 points on 4-13 from the field. It seems to me like he is being less aggressive, and perhaps is a bit fatigued from all the minutes he is getting.

The Kings lone bright spot came from their three point shooting, where they went 9-20. As mentioned previously, Jimmer went 5-8, to bring his season percentage up to 36.5%. This is Jimmer's 3rd good offensive performance in a row (he's been terrible on defense) and that's a good thing. Over the last four games, he's 12 of 20 from three, and definitely looks more comfortable and confident. He still dribbles too much and makes silly mistakes when trying to distribute, but we're finally starting to see the guy we had hoped we drafted.

The frustrating thing with the Kings is that when they lose, they lose big, as they did tonight. In their 13 losses, they've lost by an average of 20.9 points. The 6 victories meanwhile have only come by an average of just 6.8 points, with their 16 point win over New Orleans being the only win by double digits.

Sacramento is now just 6-13, and has to take the show back on the road for a couple games. They do get a couple days of rest before their next game against Utah, a rarity in this compressed season. Chuck Hayes will likely return in that game, although it's unclear just how much he'll play. The Kings could definitely use his rebounding, defense, toughness and unselfishness.