Jimmer Fredette's Shot Is Coming Around

Share All sharing options for: Jimmer Fredette's Shot Is Coming Around

One bright spot from the past three games (all losses, two of them brutal) has been that Jimmer Fredette is beginning to hit his shots. Fredette is now shooting 36.5 percent on three-pointers for the season, with league average this season at just 34 percent. Jimmer leads the Kings in three-point percentage and three-point makes, and is No. 2 behind Marcus Thornton in attempts.

Given how poorly Fredette was shooting early in the season, this is very positive movement. Here's a visual look at how Jimmer's three-point shooting has improved over the course of the season. Each new line is a different game, with the top line Game 1 and the bottom line Game 19. A red dot is a missed three, a green dot is a made three. The shots in individual games are not in sequential order, just the aggregate. A long black bar means that Jimmer did not take any threes in that game. 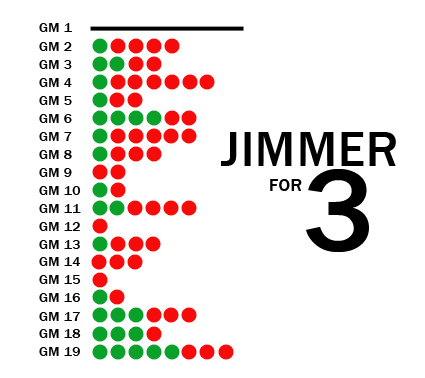 It's been just three games of better shooting, and Fredette continues to struggle in all other facets of the game -- defense, creating off of the dribble -- but the team desperately needs shooting, and drafted Jimmer to provide that. He's been doing so, even if the rest of the offense remains a mess.