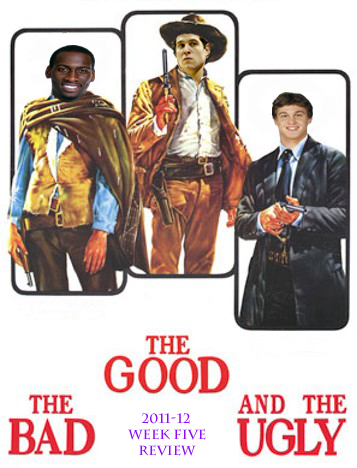 What I wouldn't do to have a SF of Gallinari's caliber on this team...

Three games, three losses. It has been a very disappointing week, and the Kings will have to take advantage of a much softer schedule coming up to make up for it.

Jimmer's shot has finally arrived in the NBA. He's still struggling in other areas of the game (playmaking, defense), but his shooting has been phenomenal. He shot 48.4% from the field and a whopping 64.7% (11-17) from three over this past week. His 3P% is now up to 38% for the year, and it will continue to rise with more consistent shooting performances.

3. Isaiah Thomas Off the Bench

Isaiah might be the best bench player currently on the Kings. For a rookie, that's saying something. When he comes into the game, he's able to bring energy, a scoring punch, and distribution. His defense is still a work in progress, but he has the quickness and mindset to become a pesky defender in time, despite his size. His shooting needs to become consistent as well, although his shot looked very good these past two games.

Jason is developing a very solid post-game. He does a great job of fighting for position, and has a new go-to hook shot that he can perform with either hand. In fact, he probably doesn't get the ball down low enough for how effective he's been. He took 20 shots in three games this week, and he made 13 of them. He's now shooting 54.8% from the field for the season. His defensive rebounding hasn't been as good though, and that's been a problem. Fortunately for Thompson, Hayes' return from injury should eventually bring JT back to the bench, which strengthens our second unit.

Tyreke had a phenomenal game against Utah, aggressive and looking like a star. He carried the team all night, and his 31 points were a season-high. His jumper wasn't falling, but nobody could stop him getting to the basket. He also did a great job distributing. This is the Tyreke we want to see night in and night out.

Hayes returned from his shoulder injury against Utah and played 20 minutes with a shoulder sleeve. He was 0-4 from the field, but his defense and rebounding were solid. Hayes return should bolster both these categories for us, and it will probably eventually lead to the return of JT to the bench, which should help our bench as well.

In large part thanks to the return of Jimmer's shot, the Kings have started to shoot very well from three. They've shot 22 of 51 from three this week, or 43.1%, a higher percentage than the Kings have shot from the field this season. Jimmer hit 11 of those, and Isaiah hit 6.

1. Tyreke Evans Against Denver and Portland

These are the type of games that we DON'T want to see from Tyreke. Tyreke is going to see a bunch of minutes every night, so when he doesn't have it going like on these nights, that's a lot of offense the Kings are missing. He's not a good enough distributor to make up for the lack of points, even though he's gotten better, and he usually still tries to score even if it's not working by taking more long jumpers. I'd rather have him attack and try to get fouled instead of resorting to jumpers. He's still not good enough on those.

Does J.J. have to face up every single time he has the ball? He can be within two feet of the rim, and he'll turn around and try to shoot a jumper. He also loves taking long jumpers despite showing no knack for knocking them down, and does not do a good job of setting screens. This trade is looking like a terrible one for the Kings right now.

This is where Hayes can really help. The Kings have been getting killed on the offensive glass lately, thanks to playing a lot of small ball and DeMarcus Cousins being the Kings only really effective rebounder. They gave up offensive rebounding totals of 19, 17 and 15 this week, all more than the Kings themselves grabbed, and two of those totals came against teams that shot better than the Kings, meaning they got more 2nd chances while having less opportunities to get 2nd chances.

It's almost unfathomable how bad our SFs have been. On most teams, John Salmons would have lost his starting role by now. On the Kings however, our options to replace John Salmons aren't all that great. Garcia might be our best option, but that's not saying much. Personally, I'd opt to start Tyreke at SF along with Jimmer/Isaiah and Marcus in the backcourt when he comes back. It can't be any worse than what we've been trying. Even defensively, the Kings got killed in each week this game by the opposing teams wings (Wallace, Gallinari, Hayward/Miles).

Marcus Thornton has a hematoma from his collision with Dwight Howard, and it forced him back to the bench for this week after he had struggled from coming back from the injury too soon. As Tom mentioned, you do NOT want to look up images of hematoma. We do not know when Marcus is set to return, but the original diagnosis was out 1-2 weeks, and we've just finished week one.

3. Blown out by Denver at Home thanks to NINETY TWO POINTS IN THE PAINT

This was the worst game I've ever attended as a Kings fan. The team seemed flat and had no energy, and Denver kept on running and gunning, and the score went up and up. The Nuggets scored a possible NBA record 92 points in the paint, and all but 4 of their field goals came outside of the paint. Denver had almost as many points in the paint as the Kings had total points. This was an embarrassing effort.

DeMarcus is quickly becoming the Kings most consistent player, and consistency is a thing this team desperately needs. Every night, DeMarcus is a double-double threat, and his efficiency is becoming much better. He's shooting the ball better, and turning it over less. He's also not fouling as much, which means he can stay on the floor longer, as evidenced by his minutes played this week (36.3 MPG).

Just can't get it together

Being a fan of the Sacramento Kings has never been about cheering for a winner. It's about enjoying and showing gratitude for the entire experience, from the highest highs to the lowest lows. It's about defiant, irrational pride. We don't want want Kobe's kind of respect or even Durant's kind of respect, because Sacramento never has and never will be gifted anything, the team nor the city. The respect we want and the respect we have had is the only kind of respect we can get- that of a team, a city, and fans that celebrate our victories with true appreciation and persevere through difficulties with whatever hope we can cling to.

We filled our crappy arena in last year's finale to cheer our crappy team for what seemed would be the very last time. We waved signs, we chanted, we screamed ourselves hoarse, we emptied 26 years of blood from our hearts as our team fought hard, fell behind, heroically charged back, and ultimately fell short. Then we kept right on cheering, the game already lost. We've been given another chance to fill our crappy arena and cheer our crappy team, to wring our hearts of any blood left in there. I hope the guys in black give the fans in the arena good reason to cheer, but the real game being played and the real reason to cheer will have nothing to do with the scoreboard on that night.

How Bad Are the Kings Really Doing This Year? by SavageBeast Breaking News: For the first time ever Siamese twins are playing in the NBA. On opposing Teams!!! 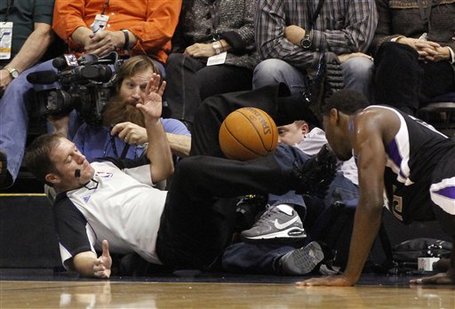 This week's caption contest winner gets a hair off of John Salmons chin beard.

The Kings desperately need a solution at the Small Forward spot. Here are the options (besides trading for someone):

A) Keep Salmons starting and hope he plays better

D) Move Tyreke to the Three

Which option do you choose? I personally am for Option D, when Marcus Thornton comes back. Tyreke can still act as the primary ball handler from the 3, and it might give us better production at the spot. It certainly can't be worse than what we have been trying so far.

@ Golden State 1/31 W (Kings need to win on the road sometimes, right? Also, it's the Warriors)

Nostradumbass Record for the Season: 14-6