Share All sharing options for: Reynolds Remembers: A Book Review 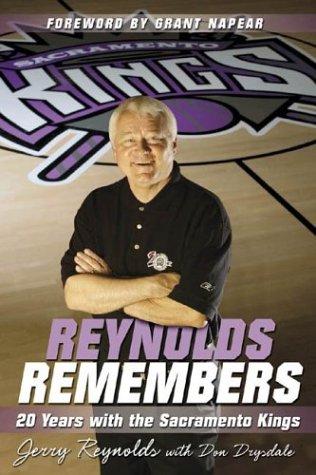 On two straight possessions, I called a play for EJ to come off a double stack. Reggie was supposed to maneuver and get him the ball for a 15-to-18 footer. Reggie missed him. He didn't run the play. He went to the other side and either missed the shot or went to the wrong guy.

Finally, I called a timeout.

And he looked at me funny and said, "You little idiot, I'll beat the crap out of you."

"Reggie, I have no doubt you can beat me up. But what you need to know is that if you don't run the play like I tell you, I'm going to run out on the floor and punch you in your nose," I told him. "You can do whatever you want after that, but that's what I'm going to do. You have to run this play. If you get the ball to Eddie, we can win this ballgame."

So we called the play again, Reggie ran it, Eddie hit the shot, and we won the ballgame.

Reynolds Remembers was published in 2005, but up until this past Christmas I had never read it, despite meaning to. Then I got it as part of a Kings-themed present package from my parents and I couldn't put it down.

In the book Jerry expounds on (at the time) his 20 years with the Sacramento Kings, as well as giving a little background on himself growing up in French Lick and eventually becoming a coach at various levels.

I'm only 22 so the most I know of the Kings pre-Richmond era is almost all based off of statistics and stories I've heard (mainly from people on this website). This book really provided a good measure of insight into those formative years of the organization. Jerry was involved in many aspects of the team, from coaching to eventually the front office. For those who aren't familiar with how a professional basketball team is run, Jerry provides a lot of stories and anecdotes (like the one above), sometimes humorous, sometimes serious, but always informative.

Jerry doesn't pull his punches when he shares his opinions either. He laments how thickheaded the city of Sacramento has been in getting a new arena (the book was published before the failed Q & R measures of 2006), calls out a revered player such as Mitch Richmond for his attitude while in Sacramento, and more. Jerry does a fine job of being fair and respectful while also calling it how he sees it.

If there was a part of the book to be disappointed in, it would be in its length. It's only 182 pages, and I feel like there were so many stories left untold, especially from the Glory Days. There is a hilarious story about Vlade Divac hiding in the bushes and jumping out to scare Jerry and another of Peja hitting 42 threes in a row in practice. Hopefully there is a sequel in the works for the future and we can get Jerry's take on the post-Webber rebuilding effort and the eventual surprise championship run of the 2011-12 season (OK maybe I got a little carried away there).

This book is a must read for all Kings fans, and I definitely recommending picking up a copy.