Share All sharing options for: The Good, the Bad, and the Ugly: 2012-13 Season Premiere

Back before the draft lottery, there were a few guys that I would have been absolutely thrilled for the Kings to land in the draft: Anthony Davis, Michael Kidd-Gilchrist and Thomas Robinson. Then the Kings got unlucky in the lottery again and all three seemed out of reach. After the lottery, Keith Smart was interviewed on KHTK about the type of guy he wanted to draft and he basically described Thomas Robinson: a hard worker who would try to make himself and his teammates better. As we all know, Robinson managed to fall to the Kings. With him and DeMarcus Cousins, that's a solid frontcourt to work with for many years.

Jason Thompson was the Kings only major Free Agent to re-sign this summer. Last year was a career year for Jason in terms of development if not numbers. So it was nice to see when the Kings re-signed him for a 5 year, 30.5 million deal, a good price for a big man in today's NBA. JT will never be a star, but he's a valuable contributor on and off the court.

The Kings Small Forward troubles are well known to fans, so it was interesting to see how they'd work to solve the problem this offseason. With the selection of Thomas Robinson, the draft was not an option so it either'd have to be a trade or signing. It ended up being a trade as we sent a future 2nd round pick to Toronto for James Johnson. Johnson had a bit of a breakout season with the Raptors but fell out of favor with Coach Dwayne Casey later in the season. Early returns on Johnson in the preseason have been good and it looks like he's going to be starting at Small Forward on opening night. If he has a good year, he could be the guy the Kings have been looking for since Ron Artest left.

The one free agent the Kings did manage to bring in this year was Aaron Brooks, a target of Geoff Petrie's for a while now. Brooks gives the Kings depth at the Point Guard spot for the first time in a while, and his cheap contract means there is very little risk.

During this offseason, the players, organized by Isaiah Thomas, all came into Sacramento for a team workout. It's that kind of leadership that has been lacking with this team for so long and it helps build much needed chemistry.

Keith Smart is all about turning the team into a family, and I think he got a lot closer this summer, the first one where he got to leave his mark on the team. The training camp and team building in Colorado have seemingly brought this team closer, and it sets a good foundation for the season.

The Kings have been looking for a replacement for bankrupt Power Balance Pavilion for the arena for a year now. They got that with locally owned and operated Sleep Train Mattress Center. As Tom said, it's a good deal for all. Plus we get to bring out the whistles whenever we hit threes.

Preseason doesn't matter, but I think it offers a bit of positive reinforcement and good momentum heading into the season. A three game sweep on the Lakers is always nice too.

With a new arena deal falling apart in Sacramento and nothing in the works since, relocation rumors have started up again, with none being bigger than Seattle. Seattle has managed to get a new arena deal thanks to the force that is Chris Hansen. Hansen has a will to bring basketball to Seattle and he's got the money to do it too. The only thing stopping him right now is that he doesn't have a team to bring. With expansion looking unlikely, the only NBA team that seems available is Sacramento. Now there have been reports that David Stern is pressuring the Maloofs to sell to the Seattle group. Whether true or not, we haven't heard the last from Hansen and Seattle.

2. Trading our 2nd Round Draft Pick for Cash

The Kings won 22 games last year and had the 5th worst record. They had the 5th and 36th picks in the draft. While the 5th pick was a great success in Thomas Robinson, Sacramento opted to trade the 36th pick to Indiana for "cash considerations". A B.S. explanation was given about the Kings needing flexibility over another young pick. Teams like the Kings don't usually sell picks. The chance for young talent is often worth much more than the cash you could get for such a pick. Sacramento learned that themselves just the year before, with Isaiah Thomas. 2nd round picks also have unguaranteed contracts, meaning the Kings could have waived the player for nothing if they really wanted the flexibility or another addition.

Two years ago, I fell in love with Hassan Whiteside's potential after witnessing him dominate at a Kings group workout. When he managed to fall to the 2nd round and the Kings selected him, I was ecstatic. But Hassan was not able to ever live up to his potential. Over two years he managed to play just 111 minutes in 19 games. The few times he went down to Reno to play in the D-League, he didn't stand out or seem to want to be there. He only managed one Summer League game this year before the team decided to waive him. He was not invited to any NBA training camps and it's unclear where his future lies.

Earlier this summer with uncertainty on the horizon, a report came out of Virginia Beach that a new arena deal was going to be in place and that they already had a tenant lined up. That tenant was implied to be the Kings. Turns out their arena deal is almost as likely to happen as me dating Kate Upton. Facts were manipulated (like taking a huge geographical area to represent population), and councilmen didn't even know anything about the plan. I'm not worried about Virginia Beach.

This summer DeMarcus Cousins was invited to workout with Team USA on the select team. With so many injuries to American bigs, there was a lot of speculation that with a good showing, DeMarcus could be promoted from the select team to play in London. But after the first day, when Colangelo was asked about Big Cuz, he gave the same old "Red Flags!" mantra despite not having spoken or getting to know Cousins at all. He later backtracked but the damage was done.

In case you missed any of my player previews from this summer, they're linked below:

Highlight of the Preseason: 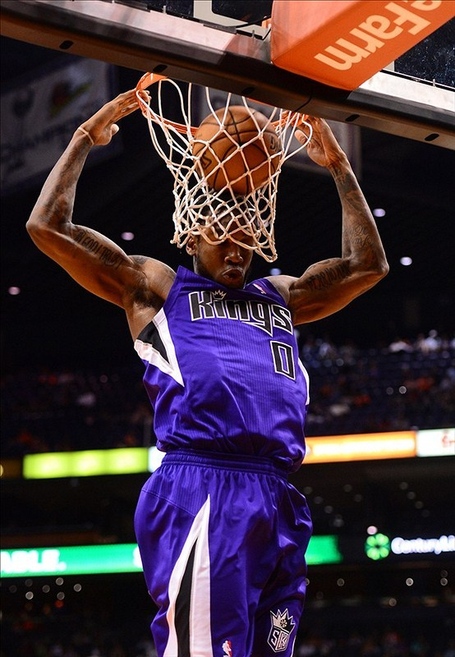 Are you excited about this season or have the constant relocation threats tampered it?

10/31 @ Chicago L (This is a tough one. No Derrick Rose but the Bulls are still a formidable team. I think the young Kings will be in for a bit of a rude awakening)

11/2 @ Minnesota W (No Rubio and Love makes the Wolves a lot more manageable. Minesota still has threats, and it will be their opening night, but I expect Sacramento to bounce back)

11/3 @ Indiana W (This is pure optimism on my part. A 2-1 start to the season on the road against some good teams would be fantastic. We need some fantastic around here.)