They both weren't pretty but the Kings managed to win their first two home games. They also managed to build up decent leads in both games, and though they weren't able to maintain them, it was enough to keep both the Warriors and Pistons at bay. To win on a more consistent basis though, they'll have to play better than they did in these two games.

JT very quietly had a very efficient week. He scored 36 points on 18 shots. His FG% was 72.2% and he's not just regained his Free Throw stroke but improved it. He's currently sitting at 87.5% from the line, having hit 14 of 16. The only area where JT really hasn't done great in so far has been rebounding. Just 16 rebounds this week coming from our starting Power Forward isn't going to cut it.

These two guys have been pretty darn great on the defensive end, contesting shots, forcing turnovers and keeping the team in the game on this end. As shaky as the two have been on offense, their defense has earned them big roles on the team. They've definitely been the centerpieces of the improved (but still not great) defense.

Hayes continues to have a great second season as a King, doing a lot of things that don't show up in the stat line. Look at the game against the Pistons for example. He didn't take a single shot, but still finished with a +/- of 10. I know single-game +/- isn't a great stat, but it does reflect Hayes contribution.

For a guy who is seeing a huge minute variation, Jimmer is managing to stay ready and shoot the lights out. Against the Pistons in particular, he made several big shots and passes. He looks quicker and more confident than last year and probably deserves to be playing more. But until he does get more time, it's up to him to keep contributing when his number is called upon.

In the one-and-a-half games before Robinson found himself elbowing Jonas Jerebko, he was playing some good basketball on both ends of the court. He was efficient from the floor, rebounding the heck out of the ball (particularly against the Pistons) and just being a pest on defense. When he comes back next week, I hope to see more of this.

WHAT? Aykis put this here? Yes. Yes I did. Because for all intents and purposes, John Salmons is one of our best wing players on offense. I would rather see John Salmons on the floor than Francisco Garcia or Travis Outlaw, and probably even James Johnson, since Salmons is a decent defender himself. This all depends on Salmons playing more like he was playing at the back end of last year and in previous year than how he started last year though. I'm going to go ahead and hope that last year was just Lockout syndrome that affected so many players.

I am not a fan of Keith Smart's rotations, particularly with regards to the Point Guard spot. Thomas, Brooks and Fredette all deserve playing time based on how they've played, but the way they're minutes are being juggled isn't fair to any of them and it's not good for the team. Thomas played around 22 minutes the first two games this week despite being very efficient and then plays 30 minutes against the Spurs in a game where his shot simply would not fall (then again nobody's shot was falling against the Spurs and Brooks was even worse than Thomas). Brooks is around 20 minutes a game but seeing lot of crunch time. Jimmer is seeing the most variation, getting almost no playing time, or quite a bit like against Detroit. I'm not sure what the exact solution is, but I would try to have some clearer cut roles. Perhaps the answer is to trade one of them or to change the starting lineup.

Another season, another disappointing end to the "Tyreke Has Been Working on His Jumper" story. The jumper is still not effective at all, and it's almost a lost possession when he does choose to take the jumper. The sad part is that I have no doubt that Tyreke IS working on his jumper, probably harder than most people work at their jobs, but he's not shooting it the same way in practice as he is in game.

Or lack thereof. That's all I need to say. To be fair, he did do a bit better against the Spurs, although that still wasn't anything special.

4. Back to Reality Regarding Our Defense

The Kings defense is much improved from last year. But it's not the all-world Thibodeau defense some media and fans were making it out to be. While the Warriors were held under 40% shooting, both the Pistons and the Spurs were around 49%. Giving that kind of percentage to a team that executes like the Spurs is understandable, but not to the Pistons. This team still has a way to go before being called a great defensive team, but they have made some strides.

So far this season the Kings have hit the 100 point mark just once, in Wednesday's win against the Pistons. That was also their best shooting night, at 48.8% but it came through more isolation play once again. The passing was a lot better against the Spurs, with 18 assists, but Sacramento blew a lot of easy shots and faced a pretty good Spurs defense which held them to 35.2% from the field.

In Wednesday's game against the Detroit Pistons, Thomas Robinson overreacted to the physicality of Jonas Jerebko by elbowing him in the throat. He was immediately ejected and then assessed a two-game suspension by the NBA. You can see video of the incident here. It was a fair punishment and a lesson to the rook to keep himself in check in the future. I'm glad Robinson was proactive about apologizing for the elbow and hope not to see him do anything so rash again.

More rumors continue out of Virginia that the Maloofs are seriously considering relocating there, with the latest being that George Maloof met with Virginia's governor to discuss some terms. If the rumors are true, the Kings are asking for A LOT of help from the state of Virginia to move. They want help paying off their loan to Sacramento, a potential relocation fee, and lost revenue from two years of playing in a small arena while Virginia Beach builds an arena for them. I have a hard time believing that the NBA would approve such a move or that even Virginia would agree to pay that much just to get the Kings into an unproven NBA market. Of course, the Maloofs through Eric Rose have denied to comment.

The Kings home opener was disrupted four times throughout the game as black tarps fell from the scoreboard. The tarps, clumsily duct taped to cover up now non-existent sponsors, disrupted play twice and caused fans to chant "New Arena".

DeMarcus finally played more like how we expected this week and it largely stemmed from him being able to stay on the court. Against the Warriors and Pistons, Big Cuz only picked up a couple of fouls and had above 20 points and 10 boards in both games. If anything, he should have been playing more than the 33 minutes he saw in both games. Cousins not being in foul trouble is a luxury and the Kings should take advantage of it when it's there. His worst game of the week, against the Spurs, he was in foul trouble and still managed 14/9/3 in 23 minutes. For the Kings to be able to have a chance in most games, DeMarcus will have to be on the floor most of the time.

Something I found at the Blackout game on Monday

at a liquor store near the arena - The store owner said the players always have a good laugh at it when they come in, figured this article was a good place to share it.

What part of FOREVER

did you not understand?

"How tastes my lack of defensive awareness?" 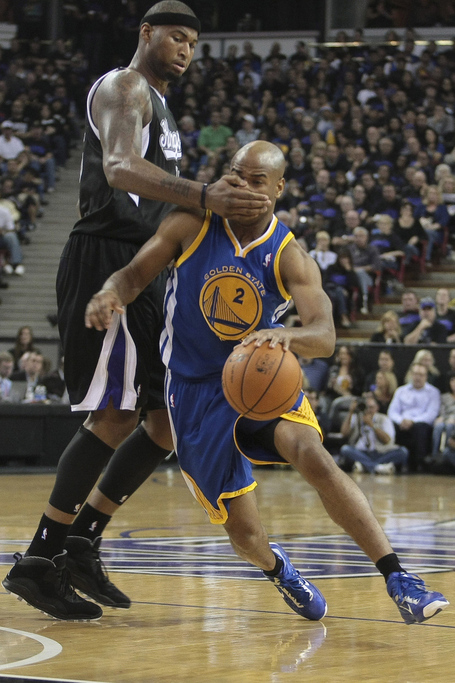 A Night At The Arco with 10 points

11/11 @ Los Angeles Lakers W (This is less prophecy and more just what I want to happen.)

11/13 v. Portland W (This is a game that could go either way but I like the Kings depth, particularly up front, much better.)

Nostradumbass Record for the Season: 4-2 (Update after Spurs game)