Hayes continues to be professional throughout this mess, playing defense and rebounding and acting as a leader. He was the one to call the players-only meeting after the blowout loss to the Hawks, a game in which he should have gotten more playing time. Hayes is literally the only player on this entire team who isn't thinking shoot first, and his teammates could learn a lot from him.

If one good thing came out of this week is that the team is sharing the ball more. All three of the Kings highest assist games of the year occurred this week, capped off by 25 in the Atlanta loss. In that loss DeMarcus Cousins had 7 assists, something I was glad to see and hope to see more of. For how often DMC has the ball, he has under-utilized the passing part of his game. If he keeps using it, I think we'll see some higher efficiency out of Big Cuz, better offense and happier teammates.

In Big Cuz's absence, JT stepped up and had some good games. The best part was that he grabbed 10 rebounds in every game this week. JT still infuriates me at times with how often he complains (he might do it more than anyone on the team, DMC included) but he's a very underrated offensive big. That's just one of the reasons I'd rather see him play off the bench and have Chuck Hayes in the starting lineup. Currently, the bench doesn't have a guy they can really go to down low but being able to sub in Jason Thompson at Center or PF would fix that. Meanwhile you'd also get Chuck Hayes more playing time against the opponent big men who are actually threats.

Another good thing out of the Atlanta game was that Marcus Thornton and Aaron Brooks rediscovered their shooting strokes. Both players had been awful from the field over the past week or so, but they almost single-handedly led the Kings back into the Hawks game. Now we just need them to be able to shoot like that on a consistent basis.

Sacramento was outrebounded in every single game this week, twice by double digits. Yes, DeMarcus Cousins' absence hurt them, but so did Keith Smart's weird rotations and the lack of another elite rebounder on the roster aside from Cousins.

The Kings have gone from "Good to Bad to Terrible" on defense faster than you can say "5-2 in preseason!". The effort that was so great early on has all but disappeared as the focus instead went to the offense. While the offense has been a bit better, the defense has been a shambles. In particular the team fouls waaay too much leading to a lot of Free Throw attempts for the other team. So far this year, Kings opponents have made 206 free throws and had 260 attempts. The Kings on the other hand are at 129 of 172. That's almost 10 points a game difference just at the line. That doesn't take into effect other consequences like players in foul trouble either.

James Johnson actually had his best game as a King this week against Portland, when he scored 16 points on 7-13 from the field. He actually led the team in scoring. This might be one of the reasons the Kings lost the game by a lot. James Johnson is shooting waaay too much. On the season, he's at 31.8% from the field and he has yet to hit a three pointer. As of right now, I'd demote Johnson to the bench full time and only play him when there are other shooters on the floor and we need some defense. That's where he excelled in preseason. Johnson still has plenty of time to redeem himself, but not as a starter.

I love Thomas Robinson, and still think he will be a very good player in this league once he figures out the pace. But man does Damian Lillard look like an absolute beast right now. Would he look as good in Sacramento? We'll never know that.

There was a lot of discussion on this topic this week, but the bottom line is that whether the punishment is warranted or not, DeMarcus needs to grow a bit of a thicker skin, especially when he has a bright red target on his back. Whether he likes it or not, he has a reputation, and he can't keep doing things that cement that reputation. I disagreed with the two game suspension given to him by the NBA but if it stops him from confronting an idiotic announcer like Sean Elliott again, then it was worth it.

While this week isn't a great example for rotation issues due to T-Rob and DMC's suspensions, there are still some inexplicable decisions being made each and every night by Keith Smart. For starters, 11 men play almost nightly despite the Kings being one of the least deep teams in the league. Tyreke Evans never even hit 30 minutes in a game this week, and actually saw less time than James Johnson in two games. Speaking of James Johnson, he needs to be out of the starting lineup immediately. Whatever defense he brings his lack of an outside shot or offensive awareness costs the Kings so many offensive possessions. Sacramento routinely performs better with shooters on the floor, yet the only time that happens is when the bench comes in. Keith Smart also tends to make wholesale substitutions for the bench instead of mixing and matching. Wouldn't it be better if starters and bench players played together? Wouldn't Tyreke Evans and DeMarcus Cousins look like much better players if they were paired with shooters (who are primarily bench players on the Kings) more often? Smart is desperate to find something that works but he's not consistent enough with his rotations to give any one of them a chance to work. The only one that he has been consistent with so far (the starting lineup) has been proven to be terrible. No spacing, no offense and it leads to holes being dug early.

The play of the team right now is doing its best to kill any and all fan momentum. It's really hard to keep people interested in keeping the team here when year after year the team absolutely stinks. That's not because of the fans, it's because of management and ownership. But there are still some who will blame the fans for not coming out as to why the team wants to leave. Just ask Portland's tv crew.

Jimmer's statline for the week was dragged down a bit by his relatively low amount of playing time in Friday's game against the Hawks. But in the other two games of the week, he was phenomenal. Against the Lakers, he came in and scored 18 points on 9 shots in just 10:45 of playing time. Then against Portland he helped lead a first half comeback, making both shots and plays as he finished with 13 points and a then season-high for the team 6 assists. Jimmer is definitely deserving of playing time, but I'm not sure he'll see it consistently with the way the roster is currently constructed and with how Keith Smart is handling rotations.

The moment George Maloof realized he wanted to be a developer What you've just played, is one of the most insanely idiotic things I have ever watched. At no point in your rambling, incoherent playing were you even close to anything that could be considered rational basketball. Everyone in this room is now dumber for having seen it. I award you no points, and may God have mercy on your soul.

Spots on the Floor & Role Acceptance by SactoKid88

DMC: Sorry Jarrett, But Coach told me to smother you with my defense. So thats what I am going to do. 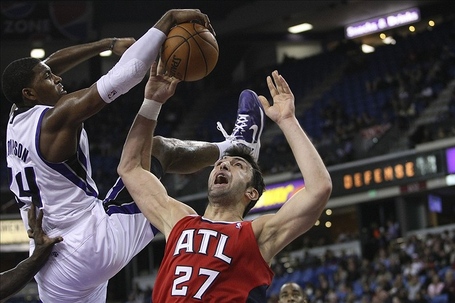 11/23 @ Utah L (We played the Jazz close last year. I think we'll split this little two-game series with each getting wins on the home court)

11/24 v. Utah W (I really can't believe that the Kings would lose every game for a second straight week)

Nostradumbass Record for the Season: 4-5 (Remind me to never predict optimistically ever again)