On the potential game-clinching possession for the Kings, Aaron Brooks isolated on Jamaal Tinsley and got stripped. It apparently wasn't supposed to happen like that.

We all gasped when, with a chance to take a lead with just seconds left, the Kings turned to ... Aaron Brooks, who drove 1-on-1 against Jamaal Tinsley. Brooks got stripped, the Jazz got the ball, Gordon Hayward sunk a jumper, the Kings let James Johnson sprint down the floor for an ugly floater that rimmed out, ball game.

The Kings reporter(s) on the scene asked about the play. Keith Smart said it was supposed to be a pick-and-roll.

The problem was no one came up to set a pick for Brooks. So he attacked Jamaal Tinsley, who was playing for injured starter Mo Williams (sprained right ankle).

There was one big on the floor, DeMarcus Cousins, with Brooks, Jimmer Fredette, Tyreke Evans and Marcus Thornton. I don't doubt that Smart could have called a 1-3 pick-and-roll with Thornton -- would anything surprise you at this point? -- but it's worth pointing out where Cousins was on the floor in this sequence. 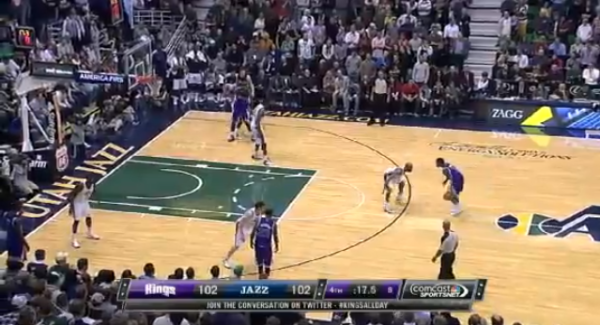 He's in the corner trying to set a screen for Jimmer. It's worth noting that on Thornton's magnificent tying three with a minute left, Cousins set a gorgeous screen to get M.T. free. Boogie can set screens. But if he was supposed to screen Tinsley, he didn't know it or he just didn't do it.

Isaiah Thomas, by the way, was the Kings' best pick-and-roll player by no small margin last season. He got zero minutes and zero seconds of playing time on Friday. I'm not saying that was the difference in the game, just noting that he has traditionally been a better floor leader and playmaker than Brooks, who is almost always looking for his own shot. Brooks was good most of Friday's game.

Combine this Screen That Didn't Happen and the Timeout The Kings Didn't Realize They Didn't Have and it was a really, really crummy final minute for Smart.