Hey guys, do you remember when we beat the Lakers this week? I sure do. It was great. Everyone on the Lakers looked subpar aside from Kobe Bryant and Jodie Meeks while everyone on the Kings was awesome at some point or another. The Lakers' vaunted bigs, Dwight Howard and Pau Gasol, were complete non-factors for the entire game.

These two guys have probably given the most consistent effort and production for the Kings this season. Neither players statistics will jump off the table but both tend to make an impact when they're on the court. JT has been scoring efficiently, and aside from Friday's loss to Utah, rebounding well too. Hayes has been able to come off the bench and increase the team's defense and get others involved.

Another new change to the offense this week has seemingly been more of the offense utilizing DeMarcus Cousins' talents as a passer, something which was not often seen last season or early this season. Before this week, he had just 13 assists on the season, and 7 of those had come in the game prior. This week he added 12 more. For a player with the ball in his hands so much who also is a focus of the opposing defense, good passing is a necessity. I'm glad the team is using this to their advantage once again.

I'll admit, I have been far from the biggest Aaron Brooks fan, both at his signing and through the early season. But he has absolutely thrived since being put into the starting lineup. In his four games as a starter, Brooks has shot a combined 19 of 26 (73.1%) from the field and 8 of 13 (61.5%) from three. Those numbers will definitely not remain that high, but I think the biggest reason why Brooks is having so much success is he is seeing some great spacing due to being on the floor with Tyreke and Cousins, and they're finding him. Brooks continuing to play well is good for the team, so hopefully he keeps it up.

John Salmons has also been a good addition, mainly due to the fact that his presence removes James Johnson from the floor. Salmons probably isn't as good a defender as Johnson, but he's still good, and more importantly, he can shoot the ball, which brings much needed spacing. Salmons is not a long term solution but hopefully he can act as a sufficient stopgap while the team searches for a solution, one that does not currently exist on this roster.

Thomas Robinson is being brought along slowly and playing limited minutes but he's been providing nice little infusions of energy whenever he's been in, on both ends of the floor. I think this is the perfect way to be handling him right now, especially with how well our other bigs are playing. He'll get the opportunity for more playing time at some point, and when he does, he'll hopefully be ready.

While the rotations this week were better, in part thanks to the new starting lineup, who Smart plays as backup PG seems to vary wildly. Both Isaiah Thomas and Jimmer Fredette saw games this week where they didn't see any action (or just 7 seconds worth in Jimmer's case). Thomas seems to be having troubles with the new offense but is still probably our best playmaker, while Jimmer seems to be more similar in playstyle as Aaron Brooks. Both players deserve time, and aren't seeing as much as they do deserve. This is something that will need to be watched as the season progresses.

2. A bad quarter against the Nets

The game against the Brooklyn Nets was definitely winnable, and the Kings were competitive in every quarter except for one, the second. In that quarter, Andray Blatche and C.J. Watson absolutely hammered the Kings and then MarShon Brooks came in and did some damage. Sacramento's offense was doing fine, but the defense was a sieve and it ended up costing the Kings the game. When good teams like the Nets have bad games like they did that night, the Kings have to take advantage. They did that against the Lakers, but they could have beaten the Nets as well.

3. Another ejection for Big Cuz

I don't know how many times it needs to be said, but DeMarcus Cousins needs to realize just how short a leash he has with officials. Barking at them for any reason whatsoever is not going to win them over. Whenever (or perhaps I should say if given that this has gone on for years now) Cuz figures this out, he'll be better off and his team will be better off.

The one thing with Marcus Thornton is that he's a streak shooter, but he's also a streak volume shooter. If he's having an off-night, that's not good because he's still going to be jacking up a lot of shots. That's one reason why he's never been very efficient. It's also why he's probably best suited as a bench scorer for most of his career. It works great a lot of the time (like against the Lakers) but other nights he'll be chucking to no avail.

Sacramento should have won its first road game this week after leading the Jazz by 12 midway through the fourth quarter. But old habits returned as Sacramento went away from what had been working and went into a prevent offense that has proven to almost never work over the past few years. Then it didn't help that Kings players seemed completely unaware of the play or situation at the end of the game, costing them a couple of chances to win despite the collapse.

Perhaps the most noticeable change in the Kings offense since John Salmons and Aaron Brooks have entered the starting lineup has been the re-emergence of Tyreke Evans. Though Brooks is labeled the "Point Guard" he is instead acting in a more off-the-ball role while Evans does the majority of the handling, and it has been working. Evans is getting into an offensive rhythm much more quickly, and a few years of experience have helped him a lot in regards to decision making. While his shot is still iffy, he did have a decent week from outside this week. His defense has also continued to be good, and he is perhaps the best perimeter defender on the team already. Hopefully these types of weeks can become the norm for Tyreke instead of the exception. The perfect allegory for the Kings rotations

Myself and my buddy went to McDonalds, and we entered into a debate with the manager on how she could rearrange her menu items to make their Meal Deals more attractive......

.....but then we realized we were in McDonalds, so we just sat down and ate our shitty food.

The Kings need to stop choosing half measures by CaliforniaJag

Taking their cues from the plastic tarps, players begin plummeting to the floor of Sleep Train arena. 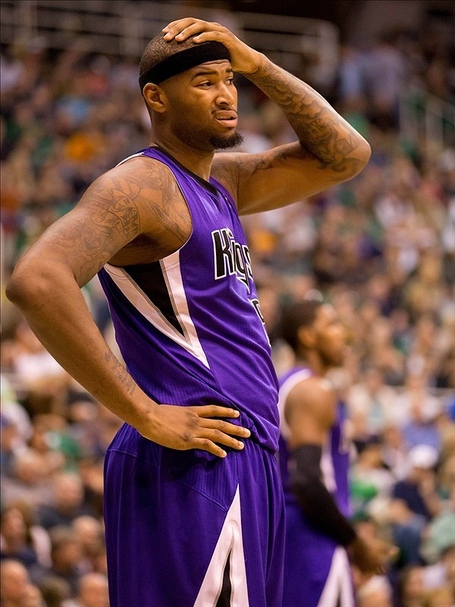 Because I was not here to tally the points for the two Jazz games, I will announce the nightly winners here. For Friday's loss to Utah, the winner was SayWhat? with 4 points. For Saturday's win, the winner was norcalfan12 with 6 points, and also becoming the first person to predict the correct score.

Also, I want to explain how I'm going to score games where multiple people in a game are tied for a category. Saturday's game had DMC and JT leading the game in rebounds with 9. You got no points for guessing either of them, but you'll get double points for guessing both of them, like KINGKENJI did. For free throws, three Jazz players shot 6. You would have gotten zero for guessing one or two, but triple points if you guessed all three shooting six. So in the future, if you want to risk a little more for the chance of higher reward, bet additional people.

The winner of the week was a three way tie at 11 points between A Night At The Arco, jtkings13, and norcalfan12.

11/27 v. Minnesota W (Yes, Kevin Love is back, but the Kings should be looking for some payback and are hopefully clicking a bit now)

11/30 v. Indiana W (This was a near road win the last time we played them. It SHOULD be a home win, but we never know with this team. Still, I think they can figure it out)

12/1 @ L.A. Clippers L (I don't think the Kings first road win is going to come up against a team as deep or talented as the Clippers)

Nostradumbass Record for the Season: 7-6