If there was one thing that could really be pointed out as good out of this opening road trip it's the Kings defense. The Kings have held their opponents to just 39.2% from the field and 16.7 turnovers a game. The defense was the only thing that kept the Kings in a position to win all three games.

Hayes has been simply phenomenal from a defensive standpoint so far and by far the most consistent Kings player through three games. His passing has been on point as well, and he's up there among the team leaders in assists. That's not necessarily good news for the rest of the team, but it's good for Chuck. He's finally living up to the contract he signed last year.

Marcus Thornton hasn't seemed to miss a beat with regards to scoring even though he's coming off the bench. Through three games he's still the team's leading scorer, and he almost singlehandedly kept the Kings in the game against Indiana with some huge clutch shots. The Kings might be better defensively with Thornton out of the starting lineup, but I think they're a better team with him on the floor.

5. Being in Position to Win Games

All three losses so far have been disappointing but the one good thing about them is that the Kings were in a position to win each one of them. Considering how terribly underwhelming the offense was in each game, that's surprising.

The Kings feature one of the better rebounders in the league in DeMarcus Cousins, but aside from him they have some work to do on the glass. Tyreke Evans has probably been the Kings best and most consistent rebounder so far for the Kings. The Kings have been outrebounded in each of their games this week, twice by double digits. It's not just because Cousins hasn't been able to stay on the floor either. Cousins played 42 minutes against the Pacers and that was the worst rebounding deficit, as Sacramento was outrebounded by 20.

For the first couple games, DeMarcus couldn't get going because of foul trouble. Then in the third game where he didn't have foul trouble, he simply could not buy a bucket down low. In fact, I believe most of his actual points have come from the perimeter so far. I don't like DeMarcus hanging out on the perimeter so often, but he must develop a better post-game. 38.9% from a Center is atrocious.

The Kings new defensive effort is encouraging, but it has led to a lot of fouls early on. The Kings have outfouled their opponents by a margin of 89-55. This has led to a lot more attempts at the line for the opponent. While the Kings have only scored one less field goal than their opponents, they have been outscored at the line 75-42. Considering the total margin of victory has been just 26, every point matters. Fouls also bail out bad offense and take players out of the game.

As I mention below in the Ugly section, the Kings Point Guards (Thomas, Brooks, Fredette) have combined for just 11 assists through three games. They've also committed 14 turnovers, with the most egregious being Thomas with 10 of those. Last year Thomas had one of the best Assist to Turnover ratios in the league, particularly in the back half of the season but so far this year the offense seems to be downplaying the role of the Point Guard. Thomas, Brooks and Fredette have all had good moments so far, but it's mostly been through their scoring. Scoring's nice, but with how haphazard the offense has been, we need more reliable quarterbacking.

T-Rob has not been performing to expectations so far. With the ball, T-Rob struggles to finish around the basket. He also hasn't been as big a force on the glass as he was in Kansas. Defensively he's also struggled and battled foul trouble. I like his effort, but would like to see a bit more production. His decent performance against Indiana was a good start.

Who would have thought that of all things the Kings offense would be this bad? The Kings feature a lot of quality scorers, yet have been absolutely atrocious in their first three games. The Kings scored just 88.3 (86 if you don't count the Double OT) points a game on 37.4% shooting. The team's also averaged just 16.7 assists and nobody has had more than 4 assists in a game yet. The point guards of the team (Thomas, Brooks, Fredette) have combined for just 11 assists over three games.

One thing that has driven me crazy over the first few games has been all the complaining coming from the Kings after calls/non-calls. DeMarcus Cousins is the poster child for this but he's not the only one doing it. It's gotten bad enough that it's been a topic of conversation for Grant and Jerry more than a few times already. They even complimented Tyreke on how well he talks to the officials. This shouldn't need to be the case. A whistle is blown, accept the consequences whether you like them or not, and move on.

Johnson has looked anything but comfortable so far this season, at least on offense. Defensively he's doing all the things the Kings want him to do, but he's been a net-negative because of his offense. He's passing up open shots, and even when he takes them he's not making them. He also tries too hard to create for others instead of focusing on being a finisher. I'm not ready to give up on Johnson just yet but early returns are not good.

4. The First Half Against Minnesota and the Overtimes in Indiana

See The Offense, above.

I seriously considered not naming anyone as Player of the Week this week. Nobody on this team had a consistently good week. But I will give it to Tyreke Evans for his defensive effort. Tyreke has the potential to be one of the best defensive guards in the league, and he's taken a big step towards doing so in these first three games. He's been extremely active, fighting through screens, rotating well and being a pest. If he continues the defensive effort and has more offensive performances like in Game 1, he'll be well on his way to a nice pay day this summer.

It hasn't stopped spinning yet so he isn't sure who's starting at Small Forward yet!

In reply to Jerry and Grant possibly not knowing who Mario, Luigi and Scooby Doo were:

Two gianted headed, middle aged cartoon character brothers and a dog, pawning to be on TV?

I'm sure he thought it was the M*loof family.

What does a successful preseason tell us about previously bad teams? by Scirocco

I couldn't decide between Tyreke's sexy spin-move or Thornton's clutchness. So here's both.

Sacramento Kings Forward Thomas Robinson unveils his Halloween costume to his teammates, calling it "Made Basket". Most of the players didn't get it.

Last Week's Runner-Up: The Guy on the Couch 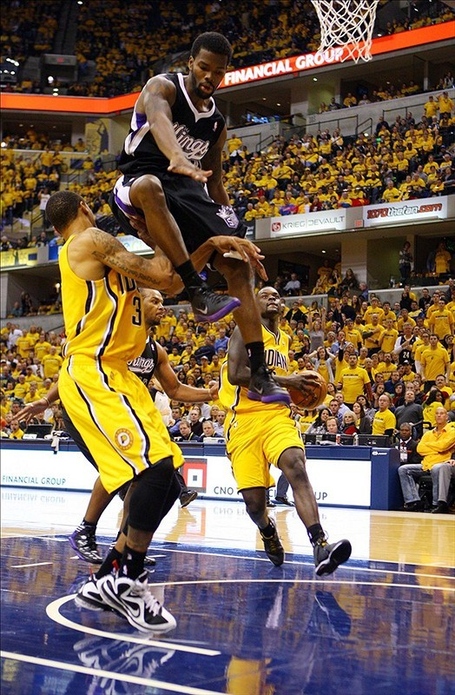 drock1331 wins with a total of five points. This seems like a fun new tradition and I would encourage more of you to participate. The post for inputting your predictions will be in the story stream before each game in the morning.

v. Golden State 11/5 W (This team really seems to thrive on huge crowds and opening night should prove to be another one of those.)

v. Detroit 11/7 W (The Kings got embarrassed by the Pistons at home last season. I hope they haven't forgotten already)

Nostradumbass Record for the Season: 1-2 (Optimism does not make for good prophecy)