The Good, the Bad and the Ugly: Week Seven

Share All sharing options for: The Good, the Bad and the Ugly: Week Seven

After four missed games with a sprained knee, Tyreke was able to come back this week, and although he was a bit rusty in his return, he still managed to be the best player on the floor for Sacramento. He's had a fantastic return to form this year, and it's nice to see that his knee injury didn't derail the progress.

Isaiah has had his minutes screwed around with more than anybody else on the team this year. Thus it was nice to see him come out and make a statement in what had been a blowout in Oklahoma City. He came in after not having played in the second half, and ended up scoring 23 points in the 4th quarter, just two off Mitch Richmond's Sacramento record. He made it a ballgame once more, and I hope that his effort is rewarded with a more consistent role, although I doubt that will happen until the Point Guard triumvirate is fixed once and for all via a trade.

In an otherwise dreary night where Sacramento got their asses handed to them early on, Francisco Garcia hit a career-high 7 three-pointers, not something you'd expect from the aging veteran. In Tyreke's absence, Garcia stepped up big time. He's earned a rotation spot on this team thanks to his defensive effort and the spacing he provides.

The Kings followed up a three game winning streak with yet another three game losing streak. The former has been rare the last few years, but unfortunately the latter hasn't. The Kings played some good teams this week, but should have come away with at least one victory, even though they were not at full strength for each game.

In the second game of the week, Sacramento was without DeMarcus Cousins and Marcus Thornton, and Tyreke Evans came off the bench. Evans' bench role was self-requested, and I would have understood it even if it had not been, at least for the one game to get his rhythm back. But in DeMarcus' absence, Smart chose to start the little used Travis Outlaw over Thomas Robinson or Chuck Hayes. Outlaw underperformed once more, and the Kings were outrebounded 60 to 50, giving up 24 offensive rebounds. Thomas Robinson or Chuck Hayes should have started instead.

Turnovers were a big problem for Sacramento this week, both in committing and forcing. Sacramento's Assist to Turnover ratio this week was 1.08 while their opponents more than doubled that with 2.2 assists per turnover. Off their 50 turnovers, Sacramento's opponents scored 74 points or about 25 a game.

4. T-Rob's Ability to Finish at the Basket

Thomas Robinson has shown some good potential this season, but his offense has been disappointing, particularly around the basket. T-Rob is now shooting 41% of the field. At the rim, he is just 22 of 43 (51.2%) not a good percentage for a big man, or even a guard (for comparison Tyreke Evans is shooting 63.1% at the rim). T-Rob can get to the rim easily thanks to his athleticism, but once he's there he is much too impatient. I have sensed him becoming more patient lately, but it hasn't translated into results yet. Robinson is a hard worker and plays with intense energy, so I think eventually he'll figure things out.

DeMarcus Cousins continues to disappoint with his actions. In Monday's game against Dallas he hit Mayo in the crotch, causing Mayo to say after the game that Cousins had "mental issues". Cousins claimed the hit was intentional, although it looks very intentional during the replay. To make matters worse, Cousins went on the defensive after the game, refusing to accept responsibility for his actions. Even if his action WAS unintentional, hitting someone in the crotch still sucks, and an apology is in order. Instead, he was granted another suspension, his third of the season.

One problem that has plagued the Kings this season has been their ability to completely disappear for large stretches of a game, allowing the opposing team to go on big runs. The Kings are then left spending the rest of the game fighting an uphill battle. This happened in each game this week, giving up a 32-4 run in the first half to Dallas, a series of smaller but no-less damaging runs in Milwaukee, and a 22-4 run against the Thunder.

JT hasn't gotten enough credit for how professional and consistent he's been throughout the year. He never gives up on either end of the floor, and he was one of the few real bright spots on the team this week. I still think he's better suited coming off the Kings bench to provide better balance between the starters and bench unit, but he's definitely playing more than capable as a starter and living up to his contract to boot.

You neglected to mention the thing that will send the Maloof family soaring back to the top of the business world.

The Kings gonna get run over by a reindeer,

He'd been drinking too much egg nog,
and we'd begged him not to curse.
But he forgot his medication,
And he staggered down the court.

When they T'd him that fateful night,
at the scene of the attack.
Oj Mayo had tears in his eyes,
And incriminating bruises on his sack

The Kings gonna get run over by a reindeer,
Coming back from Dallas in misery
You can say Demarcus got mental problems
But as for me and him we disagree

Now we're all so proud of Coach Smart,
He's been taking this so well.
See him in there watching video, Drinking beer,
and planning the draft with Scott Wissel

The Kings gonna get run over by a reindeer,
Coming back from Dallas in misery
You can say Demarcus got mental problems
But as for me and him we disagree

Now we're all so pissed at Cuz,
He got suspended for hits in nutz.
Thornton's gone cause his momma's ill,
Lets just take this team and drive straight to the landfill

The Kings gonna get run over by a reindeer,
Coming back from Dallas in misery
You can say Smarts got rotation issues
But as for STR, we all know he has no clue

Conspiracy theory resolved - Redick and Fredette spotted in the same room at the same time.

"Oh come off it, Jimmer. I know I'm not the only one who listens to Coldplay." 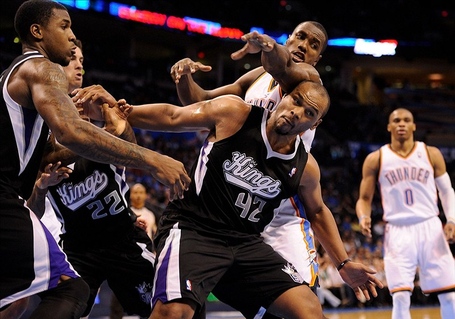 Three-Way Tie between OJandKush, SayWhat?, and drock1331 with 10 points each

@ Phoenix 12/17 W (There aren't many teams, if any, that the Kings can say they should beat. But Phoenix might be one of them)

v. Golden State 12/19 W (I think we match up well with the Warriors, even though they're playing very well)

Nostradumbass Record for the Season: 13-9