About the only thing else I can say good about this week was that in the one game Tyreke did play in, he played well once more. Since Keith Smart has changed his starting lineup and started running the offense more through him, he's been a better player. Coupled with his defense, he's earning fan's trust and respect again. His absence was deeply felt in both the Indiana and Clippers losses.

Cisco hasn't played much this season but credit to him for being able to come into the Indiana game and performing when his name was called.

This was supposed to be Cousins break-out year but if anything he looks like he's regressed. Shot selection has been poor and efficiency has been terrible. This week he did put up some nice looking numbers in a couple of games, but that's until you see his shooting percentages. 17 of 48 on the week for Cousins (35.4%). That's abominable for a big man. His passing, which had been good the last couple of weeks, also dropped off this week with just 4 total assists in 3 games. Big Cuz is definitely playing below expectations this year, and it's contributing to the Kings' struggles.

Brooks, who had been playing incredibly well since being inserted into the starting lineup, lost his shooting touch completely this week. He was just 7-21 from the field and particularly struggled without Tyreke in the lineup. I'm still not sold on Brooks as a starter, but I will wait to judge him when he has more time with Evans on the court.

Salmons also regressed to the median this week, going 8-23 from the field and not providing the outside shooting the team needs. Still, Salmons is our best option on the team at Small Forward. That's not good.

Aside from the Clippers blowout, where JT was the best player on the floor for the Kings, JT didn't exactly perform all that well against either Minnesota or Indiana. It was nice to see him bounce back against the Clippers but unfortunately he didn't have much help.

With Tyreke's absence and Thornton being inserted into the starting lineup, I'm more convinced than ever that Thornton is a bench player. He does not see a shot he does not like. Before Saturday's game where he went 6-9 from three, Thornton was 12th in the league in 3-point attempts despite shooting just 30.6% from there. That'll correct eventually but I would like to see him be more judicious in which shots to take and which to not.

Jimmer and Isaiah both continue to see sporadic playing time. Both received the equivalent of a DNP-CD this week (Isaiah played just 2 seconds against Indiana) and both also had both good and bad games. Isaiah's numbers look a bit better than they actually were, as he has continued to struggle with the offense at times. Jimmer had a good game against the Pacers followed up by an awful one against the Clippers. At this point, I'd rather see Jimmer and Isaiah split the Point Guard minutes over Brooks, especially if we're going to be losing the games anyway. Or one of these guys needs to be traded so that the other gets consistent minutes and development time and to possibly get a player that could be used effectively elsewhere (like maybe at Small Forward).

It came out this week that the Kings and the city of Virginia Beach, as well as the state of Virginia and Comcast-Spectacor were rounding a plan for the Kings to move to Virginia Beach. The plan calls for over 90% of the costs to be paid for by the public, including $150 million from the state of Virginia. That's a tall order, but the votes on approving the money are coming up sooner than you think. I agree with Rob McAllister's take on this; I think Virginia Beach is just being used for leverage in order to get a buyer like Hansen to pony up more money than the franchise is actually worth. To do that though, you need other interested parties. Still, it's bad that we continually see more progress with the team doing its best to leave than to stay.

Just an embarrassing game. It seems like the Kings gave up in the 2nd quarter. Defense was non-existent, offense was sloppy. It was just bad.

When Tom told me that Kevin had agreed to become StR's new Social Media Editor I was thrilled. I've gotten to know Kevin over the past couple years through the Here We Stay movement and there are few Kings fans as passionate about the team and this city as he is. This is a man who had Donté Greene on hand to help propose to his now wife. This is a man who went to countless City Council meetings/events in support of keeping the team here. Kevin's a great addition to the team and helps shore up one of the website's biggest weaknesses: its lack of Marcin Gortat look-a-likes. Oh and social media. Welcome aboard, Kevin.

Otis - I was there for the "bad" years in the 90's too (although they seem great to what we have now). I lived, slept, and breathed this team. I went to my first game at 8 years old with my dad and grandfather - 94-95 season. I was hooked, Richmond was my favorite player with Michael "the animal" Smith not far behind. We were terrible but Arco was still rocking, the original Jock Jams CD (which I still have to this day) would pump through the speakers to fuel the fire! Gary St. Jean was leading the cast of misfits, I think we finished near 500.

From then on my dad and I would catch a game a week, sometimes more if I was lucky. Same routine before and after every game - Merlino's freeze before, and a red rope to share on the car ride home from Arco. I would tell my parents I was going to sleep (9pm bedtime) and listen to the end of games on my walkman from my bed. I remember one game in particular where Sarunas Marciulionis hit game tieing 3's to send the contest in single and double OT - I was so tired at school the next day I could hardly stay up. I went to a Catholic private school that required uniforms - didn't stop me from repping the squad I loved daily - I wore my Richmond jersey under my uniform for an entire schoolyear (4th grade)! Every birthday, my dad would take my whole family to a game. On my tenth, Richmond hit a game winner against the Miami heat - I remember telling my parents it was the best night of my life. I was the Kings on NBA Jam (Richmond & Tisedale) even though they were awful and it put me at a significant disadvantage against the likes of Kemp & Payton and Stockton & Malone. I called The Sports Dudes, Wheels After Work , and Grant's show to try and talk about the games, even though they'd never let me on because of my age. My fanhood became a little less "crazed" as I got older, but my love for the team has always burned bright. Long story short, the kings have always been a huge part of my / my family's life - even if I am all the way on the other side of the country. Shit, it's one of the main topics of conversation every single time I talk to my dad on the phone.

Fast forward to now, and all the bullshit is happening. Yeah I live in PA, I only get to catch one game a year at Arco (always go to the Sixers / Wizards / Nets road games) so one could argue that a move might not mean as much to me. Dead wrong. The whole point of the Kings is that they are Sacramento's team. Sacramento was THE ORIGINAL small market, raucous crowd, awesome fanbase team. If they were to move, I'd never get to re-live anything I just explained in my previous paragraph. No more Arco Dogs, no more Hustle Board. What will my dad and I discuss on our phone calls? What about my grandma, who still watches every game from her Carmichael home? No more "Turn the sprinkler systems on / If you don't like that, you don't like NBA basketball / Put it in the book, send him to the line!!!". Don't want to sound dramatic, but it would be like if a close relative or the equivalent would pass away. I guess that's why I still follow this team, why I still hang on for the smallest glimmer of hope (even though it looks like we're just about finished). FTM, the end.

Why I want the Kings to Stay in Sacramento by yaboyrafa

"I keep getting T'd up, short and stout. This is my handle, oh f*ck not again!"

"In light of knowledge attained, the happy achievement seems almost a matter of course, and any intelligent student can grasp it without too much trouble. But the years of anxious searching in the dark, with their intense longing, their alterations of confidence and exhaustion and the final emergence into the light - only those who have experienced it can understand it. 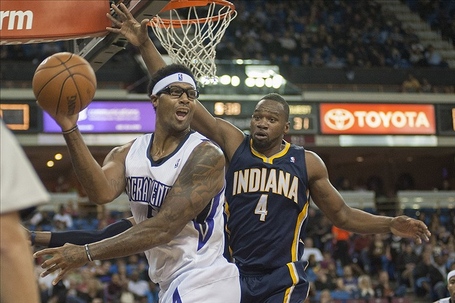 12/5 v. Toronto W (The Raptors are in a similar situation to the Kings. With so many days off to rest, this is a game the Kings need to win)

12/7 v. Orlando W (The Magic are not the same team without Dwight Howard/Ryan Anderson but they still have weapons. Sacramento can't let their guard down and they need to protect the home court against a weak road team like the Magic)

12/8 @ Portland W (I'm betting hard on the team doing something next week they haven't shown they can do consistently the last few years: win)

Nostradumbass Record for the Season: 8-8