Isaiah Thomas is getting short shrift by any measure

Compared to others who placed in the 2012 Rookie of the Year vote, Isaiah Thomas is getting rather short shrift.

Share All sharing options for: Isaiah Thomas is getting short shrift by any measure

Aaron Bruski wrote a piece for Pro Basketball Talk about the Kings' locker room wanting Isaiah Thomas to have a bigger role on the court. I buy it, and I don't buy it. I buy that some players want that, specifically DeMarcus Cousins and maybe even someone like Jason Thompson. I don't buy that it's a consensus opinion. For one, more Isaiah means less Aaron Brooks and Jimmer Fredette, it means less ball time for John Salmons, it means less ball time for Tyreke Evans. That's four rotation players right there who in all likelihood don't mind Isaiah on the bench. Francisco Garcia is close to Tyreke and in all likelihood supports his friend as de facto point guard (as he is with Brooks as a starter). I have no idea what Chuck Hayes might think. I can't imagine anyone would care what Travis Outlaw, Thomas Robinson or James Johnson might think about this. (No offense, fellas.) So while I certainly believe that DMC and possibly J.T. want more Isaiah, and certainly that Isaiah wants more Isaiah, I'm not sure there's anything like consensus about it.

But there has to be consensus among everyone who watches this time that Isaiah's playing time is curious. Remember: Cold Blooded finished No. 7 in Rookie of the Year voting last season. Some were calling for him to get No. 3 votes behind Kyrie Irving and either Ricky Rubio or Kenneth Faried. (Those three plus Kawhi Leonard, Iman Shumpert and Klay Thompson finished ahead of Isaiah. Brandon Knight and Chandler Parsons followed.)

I decided to look at those nine players -- those who received at least 1 percent of the possible R.O.Y. vote last year -- to see just how many minutes everyone is getting. Of course, Rubio just came back and has played all of two games, so I yanked him out. Shumpert has missed the first part of the season too, so I yanked him. Here are the other seven with bar graphs showing what percentage of their games this season have come at the different minute levels. There's a point in here, and you really can't miss it. 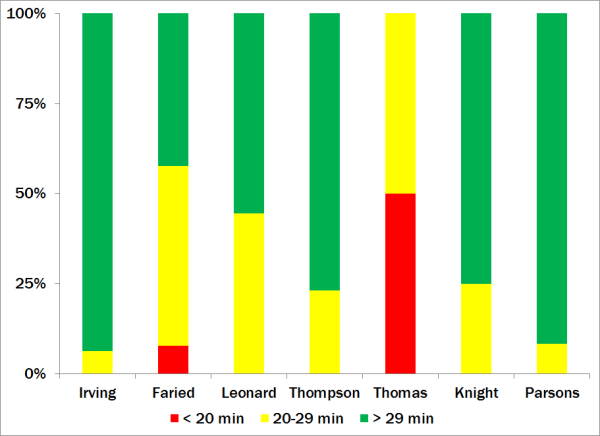 The other seven sophomores in our field have had two appearances with fewer than 20 minutes combined this season out of 129 games. Half of Isaiah's appearances have resulted in fewer than 20 minutes. Some 72 percent of everyone else's games have resulted in at least 30 minutes of burn. For Isaiah, that figure is 0 percent -- he hasn't played 30 minutes or more once this season.

Add in that Isaiah has a few DNP-CDs (which aren't represented above), and you get the picture.

Isaiah Thomas is the only player considered one of last season's top rookies to have such a small role on his team this season. And the player taking his place is, seriously, no joke, Aaron Brooks.