The Good, the Bad and the Ugly: Week Eight

Share All sharing options for: The Good, the Bad and the Ugly: Week Eight

This was an incredibly tough week/month/year/half-decade for Kings fans but you guys made it all better. This IS the best community of Kings fans out there and I enjoy conversing, debating, commiserating, and (very rarely) celebrating, with all of you. This holiday season, I'm thankful for you guys.

JT keeps on chugging as the most consistent player on a game-to-game basis. If every player on the Kings was as consistent as JT, we'd be a much better team.

Now this was a fun game. Lots of points, great shooting, lead changes down the stretch, and a Kings win, over the Warriors no less! Just about perfect. Of course I would have liked to see better defense and less of a threat to lose, but I can't argue with how entertaining the final result was.

Thornton came back to the Kings after being absent for a while to care for his ailing mother. His shot returned with him, hitting 7 threes in the two games since he's been back. The team has missed Thornton and his scoring prowess, particularly in Evans' absence.

This has probably been the best Johnson has looked since the preseason. He's more calm and less reckless on offense, not shooting as much from the perimeter and opting instead for attacking the basket, where he's most useful. Against the Clippers, he actually was effective from outside, surprisingly so. I would hope to see that on a consistent basis, but I fear it was an outlier.

Here's the big problem with John Salmons as our Small Forward: He's not nearly as consistent of a shooter as we need, and he's far more comfortable off the dribble than spotting up. When his shot was off, like it was for most of this week, the team suffers. Salmons has been a pro this year, but this never-ending Small Forward situation needs to be rectified.

It looked like we had seen the last of Tyreke's knee problems when he came back last week and was seemingly returned to form, but he apparently came back too soon, leaving the Denver game after the first quarter due to a flare-up. He has not returned since, and there hasn't really been a timetable given by the team as to how long exactly he will be out. For his sake and the team's sake, I'd let him take as long as he needs to get healed.

The Kings continue to get beaten mightily on the glass on a regular basis. The only game they were not outrebounded this week was against Phoenix.

1. Denver makes us look like cones for a layup line

In all my years of Kings fandom, I can count the times I've actually left a Kings game early on one hand. Sunday's embarrassment against the Nuggets was among them. My dad and I were so disgusted we left with six minutes left to go in the third quarter and felt perfectly justified. Sacramento was run out of their own building and rightly should have felt ashamed.

The Kings looked like they were going to right a wrong on Monday when they quickly got out to a 19 point lead in the first half in Phoenix, in part thanks to some excellent play from Jimmer Fredette and Isaiah Thomas. But the Kings watched that lead slip away in short manner and never saw it returned.

3. Cousins Blows up on Smart; Gets Benched

It seems we can't go more than a week without an incident involving DeMarcus Cousins. This time he exchanged heated words with Coach Smart between quarters and at halftime and thus was not asked to return to the game or even the bench after the half. He did say that he was in the wrong after the game, the right move, but this is not the first time we've heard him apologize and yet continue to misbehave. Now he needs to walk the walk.

I know we've talked about Isaiah a lot lately, but let's give it up for Jimmer as well. Jimmer has had his minutes jerked around just as much, and he's often left playing against a size mismatch at shooting guard, but he has been ready each time. He's improved his ball-handling an incredible amount from last season and is showing legitimate talent as a scorer in the NBA (something that was in doubt his rookie year). This week he set a new career high and was part of some of the Kings best play this week. Last year near the end I said Jimmer could be a leading candidate for Most Improved Player of the year, but he's even surprised me with how much better he is.

You're a monster, George M*loof.
Your heart's an empty hole.
Your brain is full of spiders.
You've got garlic in your soul, George M*loof.
I wouldn't touch you with a
Thirty-nine and a half foot pole.

The three best words that best describe you,
Are as follows, and I quote"
Stink!
Stank!
Stunk!

Two great ones this week:

A Declaration of Independence by Schneezel

Ventilation 101 by The Prince of Tides

Chuck Hayes: "Everyone stand back! Cousins has got that turkey-tappin' look in his eyes!"

Last Week's If Images Were Captions Winner: Ball in Cup

oompa loompa doompadee doo... this offensive rebound won't be for you. 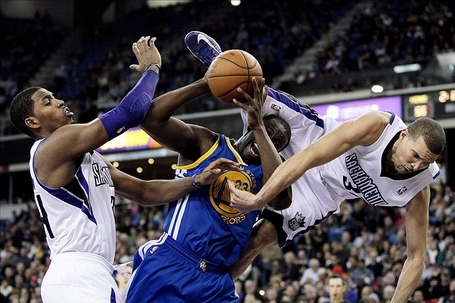 v. Portland 12/23 W (The Blazers won't forget the drubbing we gave them in Portland a couple weeks ago but I think the Kings can still win this at home)

v. New York 12/28 L (The Knicks offer a lot of matchup problems, particularly with Carmelo Anthony playing PF. They are a very good team and it will take a very good game from Sacramento to remain even competitive.)

Nostradumbass Record for the Season: 16-10