Sacramento had a very rare undefeated week, and did it without Tyreke Evans for two games. Each game had a new wrinkle. Against Toronto, Tyreke Evans hit a couple of clutch threes in a row in the final minutes. Against Orlando, the bench unit, led by Isaiah, Jimmer and T-Rob spurred a fourth quarter comeback. Finally, John Salmons and Travis Outlaw were huge in a blowout road victory in Portland. Just a great week for Kings basketball on the court.

Oh and not to be denied, Kings basketball off the court had a good week as well, as Virginia Gov. Bob McDonnell denied Virginia Beach the $150 million arena subsidy. Virginia Beach was heavily reliant on the state assistance for the deal to go through. Without it, it's an even bigger longshot than it was before. Still, we need the Maloofs to stop looking elsewhere and begin re-negotiating with Sacramento, whether that's renovation with Van Dusen's group or getting back to the table with the Mayor on a downtown arena.

John Salmons had the two highest assist games for a King this season this week. Against Toronto, he had 7 assists, including both passes to Tyreke Evans for his clutch threes. Then in Portland he played like the best player on the floor, finishing with 19 points and 11 assists. Salmons also shot the ball well, aside from the game against the Magic. If he can continue to play at this level, the Kings will be a much better team.

Tyreke's left knee has caused him to miss four of the last five games, but thankfully it doesn't appear to be serious. He was able to play Wednesday against Toronto at a high level, and while he didn't play against the Magic or Blazers, an MRI came back negative for damage. Hopefully we'll have Evans back at full strength for the remainder of the road trip.

JT doesn't get lauded much, but I'd like to appreciate his consistency. He's had many more good games than bad this season, and his defense looks like it's improved. In fact I think the Kings should be running some more plays for him to take advantage of his post-game. Of all the Kings players he's probably the most developed there.

7. Jimmer and Isaiah together

Against the Magic, Keith Smart tried out playing Isaiah and Jimmer at the same time, and for the most part, it worked great. Isaiah was able to push the pace, and Jimmer was able to hit some big shots, both inside and outside. DeMarcus Cousins raved about Jimmer's "crazy" moves in this must-hear soundbite captured by the Cowbell Kingdom guys. I kind of like the Isaiah and Jimmer combination, and while I realize there needs to be specific situations for it, I'd like to see it used a bit more. They play well off each other.

Cisco got the call to start the last two games in place of the injured Tyreke Evans, and played well. Cisco hasn't gotten much playing time this year, but he answered the call this week. He hit shots, and played active on defense. His help defense in particular shone, as he was able to come over and block several shots from the weak side. When Tyreke comes back, I think Cisco should remain in the rotation, over a guy like James Johnson.

9. Getting to the Line

When Marcus Thornton's shot isn't falling, his value on the court is diminished greatly. Thornton's a scorer first and foremost, and even when he's not shooting well, he's still going to be taking a lot of shots to try to get into a good rhythm. He didn't find that rhythm this week, going a combined 4-23 from the field this week.

Against Orlando, T-Rob had a very good game, but did go 0-5 from the field. Almost all of those shots came right at the basket. One thing that T-Rob really needs to work on is finishing at the basket. This requires patience and a soft touch. In a recent interview, he said that he was studying other undersized bigs. He mentioned Paul Millsap in particular, and that's a great guy to study. I would also suggest film of Carl Landry (when he's around the basket) and Elton Brand.

I don't think any more needs to be said here, but I'll say it anyway. Why is he still there? Bill Walton, I can understand, because he has some unintentionally hilarious moments and it's funny to hear him cut off Peaches. But Gray adds nothing, and I have yet to meet a fan that likes him on the telecasts. I'm glad it's infrequent, but it's still too frequent.

2. Ric Bucher is an idiot

Greg said it a lot more eloquently than I did. This kind of uneducated and simply stupid opinion just pisses me off, particularly from a prominent member of the media like Bucher.

Cousins may not have been the best player in each of the three games this week, but he was the most consistent at making a big impact. Big Cuz had a double-double in each of the games, stayed out of foul trouble and got to the line. Cousins may not have been the most efficient from the field, but I did like his increased aggression in attacking the basket. While his post-game still needs a lot of development, simply attacking the basket allowed for him to get to the line. He's also been playing more unselfishly, moving the ball out of double teams and forcing less.

I'm combining a couple of comments here from section214. Sing along to the tune of "These are a few of my favorite things"

Jason and Tyreke gain current affection,
T-Rob and Cousins get all the ejections.
IT sits watching as Thornton still flings,
These are a few of my favorite Kings.

Gavin and Joe and George lay out no money,
Petrie could not attract bears with free honey.
While other franchises play for the rings,
These are a few of my favorite Kings.

And then I just feel...plain sad.

Our Rebuild Project... Will it Ever Turn into Something Good? by Sactown_Loyalty19

The Kings were so far behind, a befuddled James Johnson thought that he could put 6 points on the board by throwing a touchdown pass. 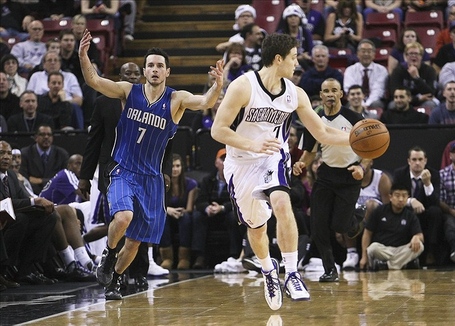 12/10 @ Dallas W (The Mavericks aren't exactly chumps without Nowitzki but they are a bit easier to handle. Hopefully the Kings can capitalize.)

12/12 @ Milwaukee L (Nobody expects the Yeti, and the Yeti will have his revenge)

12/14 @ Oklahoma City L (This could be ugly, although the Kings have played the Thunder pretty competitively in the past couple of years)

Nostradumbass Record for the Season: 11-8