Share All sharing options for: Tyreke Evans The Point Guard: A Chart

The Sacramento Kings' offense remains in relative shambles; the team hasn't broken 100 points in almost a month (Jan. 5) and currently sits No. 26 in offensive efficiency, dead last No. 30 in shooting.

Something I've noticed over the past two weeks is that, lo and behold, Tyreke Evans is really racking up assists. Over his last eight games, he has 57 assists -- better than seven per game. That's not some Steve Nash number or anything ... but it's an improvement on Evans' previous numbers in this category, and it's something that resembles what a more traditional point guard would produce.

Looking at the assist rate figures for Evans since Keith Smart took over is a bit more emphatic along these lines.

Assist rate on a player level is the share of possessions used by assists in lieu of shots or turnovers. The higher a player's assist rate, the more likely he is to register an assist on any given individual possession. Most point guards have assist rates of 30 and up. Tyreke has been at 25 for his career. Combo guards run between 20 and 28 usually.

This chart shows Tyreke's game-by-game assist rate over his entire career. The red line is a five-game moving average of his assist rates. Something interesting is happening right now. 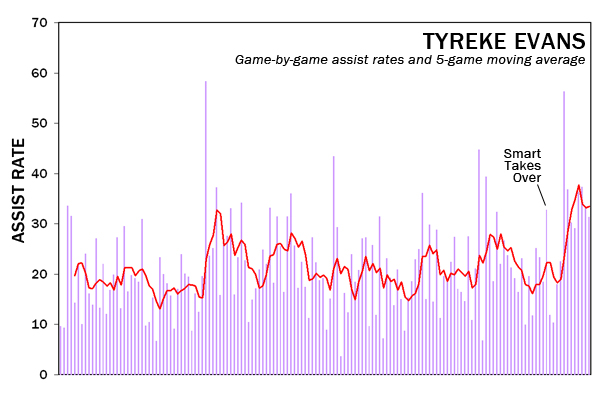 Over the past two weeks, Evans' assist rates have been consistently high. Since the loss to Minnesota, which was his only double-digit assist game of the season, Reke hasn't fallen below an assist rate of 29 in any game. His recent five-game moving averages have been the highest of his career, showing a slice of point guard purity he's never before experienced.

This could be a long blip, but if so, it'd sure be a weird one. Remember: before January 5, Evans had played for one NBA head coach. Paul Westphal, a man who insisted (with consistent agreement from the front office) that Tyreke Evans was a guard -- not a point guard, not a shooting guard, but a guard.