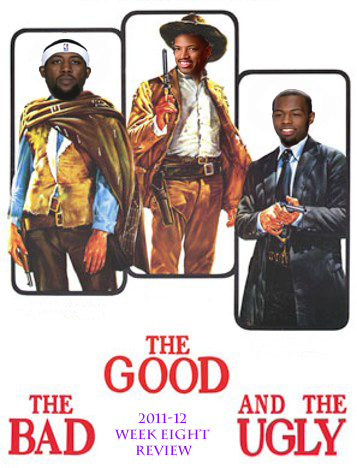 I wish the Kings would #SayYes to Defense.

John Salmons finally got benched. I'm not sure whether it was because of how well Isaiah (his replacement) had been playing or how terribly Salmons had been playing, but the fact of the matter is that it happened and I hope it's a lineup that's here to stay. Isaiah did a very good job playing with the starters in the 1st quarter in Detroit as the Kings had one of their best starts this year. Now I just wish we'd see that lineup to end games as well...

The Kings as a team have been doing a much better job of moving the ball, and had two games with 20+ assists this week alone. Our offense has been much better for it. Tyreke, Isaiah and Jimmer have all done a very good job of finding the open man, particularly right at the rim. I also like the job that DeMarcus and JT have done with their passing from the mid-post to cutters. The better ball movement also coincides with better off-the-ball movement by players too. It's much easier to get the ball to someone for a good shot that will result in an assist if those players make an attempt to get open in the first place.

The biggest bright spot of our second unit this season has been Jimmer and Isaiah. Despite being rookies, these two guys have been our best and most consistent bench players all season. They've both managed to overcome pretty bad shooting slumps to start the season to find their rhythm. The good thing is that they both still have a lot of room to grow. Jimmer has a bit of trouble when opposing teams apply pressure or double teams to him, but it's amazing that they already respect his shot that much. I wish our own players respected his shot that much as it seems he doesn't get rewarded with a pass often enough when he does get open. Isaiah has been really fun to watch, and his confidence and up-tempo game is contagious. He does need to learn to settle down at times, and he also can get into a bit of a chucking frame of mind (see New York game this week), but for the most part he's made the team better when he's been on the floor. Jimmer leads all our bench players in scoring with 8.3 points (4th on the team) and 2.1 assists (3rd on the team) in 21.6 minutes, while Isaiah has chipped in with 7.4 points (5th on the team, 2nd on the bench) and 2.5 assists (2nd on the team) in 17.6 minutes. I wish the rest of our bench would play as well as these two have.

5. Council Votes Unanimously to Continue on with the Arena vote.

The vote wasn't anything major, just to narrow down the list of companies that the city would be dealing with, but the support of all the fans that showed up was awesome, and it was even better when they voted unanimously in favor. There is one very big vote left, on February 28th, and I hope we can pack it again and achieve another favorable result. The fate of the Kings in Sacramento will likely be decided on that day.

Nobody played well in this game and nobody really seemed like they were trying to play well. The Kings just looked tired and as if they didn't care. Usually this team gets super hyped up for big games like this, so it was disappointing to see. Even Hassan Whiteside got to see playing time for just the 2nd time in his career, and he didn't look all that enthusiastic about it.

Donté has been the Kings most consistent wing this year. He's finally started rebounding like a 6'10 guy should, and he's being more conservative in his shot selection. He's shooting the greatest percentage of any of our wings from the field, and against Chicago he had 10 points and 4 rebounds in just 14 minutes. Yet he continues to see inconsistent minutes, and Travis Outlaw somehow usurped him in the rotation in the last two games. Greene didn't see the court at all vs. Detroit, when we could have used someone bigger and more athletic on Prince.

I'm not sure Tyler Honeycutt is ready for consistent NBA minutes yet. But I'm at the point now where I know Salmons, Outlaw and Garcia are NOT going to get it done, so why not see what you have in a player like Honeycutt? Our other rookies have proven to be good producers, maybe Tyler will too if given the chance. We won't know if we can't see, and at this point I don't think we have anything to lose.

Tyreke has improved his set jump shot. When he goes straight up and down and doesn't take the ball off-the-dribble, he has a pretty consistent stroke. But Tyreke rarely takes jumpers that aren't off the dribble. Here's a typical Tyreke jumper possession: Tyreke gets the ball at the three point line. Tyreke dribbles slowly, hunched forward towards the basket. Tyreke does a crossover and steps back into a fadeaway jumper. Clank. This week, he shot a combined 5-18 on shots outside of 16 feet, and that accounted for almost 36% of his shots. I know that Tyreke needs to add a jumper to his arsenal or he'll get too predictable, but I'd rather he not shoot until he figures out a consistent form.

This team's defense is terrible, and this week wasn't any different. The Kings have a couple of players with the potential to be very good individual defenders, but so few of the players ever really seem to grasp the concept of good team defense. New York absolutely killed us in Pick and Rolls, and against Chicago and Detroit, the Kings let both teams penetrate at will, resulting in a lot of over-helping and open shots. If we had simply played average defense against Detroit and Chicago, we probably would have won both of those games. The Kings currently have the 28th worst Defensive Rating in the league, and give up the most points in the NBA. Defense needs to be a continued focus for this team, and everyone needs to buy in.

2. Giving away a victory to Detroit

Our execution down the stretch was just terrible. Tyreke deserves a lot of the blame for his decisions to try to play hero ball and take unnecessary jumpers, and our over-helping on defense led to wide open threes on the other end. John Salmons played most of the 4th quarter despite having shown absolutely no reason to be on the floor.

John Salmons has had the worst season of his career, but it took 29 games, almost half the season, before he was finally kicked out of the starting lineup. He's shooting just 36% from the field and was just 4-18 in three games combined this week. His much vaunted defense has only shown up sporadically, and according to 82games.com, there is no difference in the Kings defense whether he is on the floor or off of it, and the offense has been much better with him off the floor. Synergy Sports rates him as the 2nd worst wing defender the Kings have (behind Francisco Garcia). He has earned his spot on the bench, and if the team were any better he probably wouldn't be playing at all.

Travis Outlaw was bad last year. He's been even worse this year. I don't understand why he has seemingly beat out Donté Greene for a rotation spot when Greene has been our most consistent wing player this year. Outlaw is shooting 28.9% for the year. You almost have to try to shoot that bad.

J.J. Hickson looked to be a promising acquisition, an athletic forward who could rebound and score in the low post. He's been anything but promising in Sacramento. He's shooting a mere 38.2%, way below his career average, because he insists on continuing to shoot jumpers. He's most effective near the rim, but he's only taking 1.9 attempts a game there.

Chuck Hayes is the hardest to bash for me because of the injuries that he's had to play through. I don't think we'll properly be able to gauge Hayes until next season. He's shown to be effective at defense and on the glass (he did a great job on Greg Monroe this week), but makes the offense worse when he's on the floor.

So aside from the draft, it looks like the Kings struck out completely in their offseason acquisitions this year. One or more of these guys are going to have to step up for the Kings to start playing better.

The one thing I keep telling myself after every disappointing loss is that at least we have a future perennial All-Star, perhaps more, in Cousins. The guy keeps improving and he's become a force to be reckoned with in just his 2nd year in the league. This week he also started to show off his passing once again. His defense still needs a lot of work, as does his conditioning, but he does lead the league in Charges drawn. On offense, his mid-to-long range jumper has been incredibly consistent. He currently shoots 2.9 attempts from 16-23 feet, the same as Kevin Martin in Houston. They both also make the same percentage, at 48%. The next highest percentage in that area on the Kings belongs to Isaiah Thomas at 40%.

Sorry that we couldn't afford a card,

but please accept this coupon for two free Jack in the Box tacos when you purchase a large fountain drink.

In another quote, Sheedy stated she'd vote against the measure because she

A Kings Fans Guide to Yiddish by betweentheeyes

This week's caption contest winner gets a Smart phone.

Has your opinion on Keith Smart changed from a couple of weeks ago? If so, what's different? For me, I still like the way he connects with the players, but I do have serious issues with his rotations.

@ Cleveland 2/19 W (Cleveland has played decent basketball this year thanks to big seasons by Kyrie Irving and Anderson Varejao. Varejao however recently broke his wrist and is out for the foreseeable future. I predict a very big game from DeMarcus Cousins in a Kings victory)

@ Miami 2/21 L (We can't even guard Bill Walker or Steve Novak, how are we supposed to guard Dwyane Wade and LeBron James?)

@Washington 2/22 W (The Wizards have been playing better basketball as of late, but they're very inconsistent. Sacramento is a better team than the Wizards, and they should look to take advantage going into the long All-Star Break)

Nostradumbass Record for the Season: 19-11