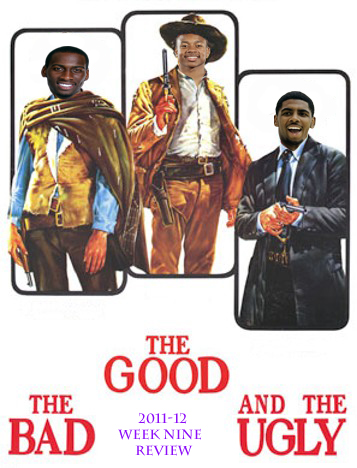 2. Return of the Bayou Bomber

This week saw a return to form of sorts for Marcus Thornton. He scored at least 21 points in each game, and shot pretty well from the field as well. My particularly favorite thing from Marcus as of late has been his increased tendency to cut to the basket off the ball, and his teammates are finding him. That kind of off-the-ball movement will just make our team more efficient, and it will make players that have to guard Marcus expend more energy on that end. Marcus' performance in the 4th quarter of the Washington game was downplayed a little because of Isaiah, but he was just as important in the Kings' victory there.

The Miami Heat as currently constructed may be one of the most talented and skilled teams of all time. So color me surprised when the Kings came out playing like they were the better team, and keeping the game competitive for much of three quarters. Every player did their part and came out hot. Tyreke Evans more than held his own, Jason Thompson had a 16 point, 10 board double-double, and Marcus Thornton and Isaiah Thomas chipped in 20+ points each, with 20 coming in the 3rd quarter for Isaiah alone. The Kings didn't get the win, but they'll win more often than not by playing with the same effort and intensity they did in this game.

We're finally starting to see why the Kings wanted Hayes so badly this summer, and why a lot of us were very excited over the signing in the first place. His defense has been supremely effective, as detailed in the advanced statistics post yesterday, and this week he finally began to showcase his excellent passing from the high post. Chuck isn't back at 100% so far, but I liked what I saw this week.

With John Salmons out the last two games with a sore hip, Cisco got most of the minutes Salmons would have seen coming off the bench. He scored in double digits both times, had a couple steals and blocks to boot, and was instrumental in the Washington victory. It will be interesting to see if he keeps playing Salmons' minutes when he comes back from injury.

It's good news that the County has stepped up, pledging 75% of the annual revenue from three downtown county parking lots to go towards helping fund a new Arena. The city of Sacramento has done its part to come up with a solid financing plan. Now it's up to the Maloofs and the NBA to do their part. As TZ said: Pony Up or GTFO

I think it's safe to say DeMarcus was a bit gassed this week on the tail end of a long road trip and the compressed first half of the season. He only grabbed double digit boards once, and shot an astonishingly low 30% from the field in these 3 games. That's plain unacceptable, not just for a big man, but for anyone. Hopefully the break came at just the right time for Big Cuz, and he'll be back his usual self next Tuesday."Blob - wtf?"

In a year where JT has normally been very consistent, this week was a bit different, as he had a bad game, a good game, and then another bad game. None of our bigs have been consistent this year, but with JT starting, we need consistency from him, particularly with Hayes and Hickson being almost no offensive threat whatsoever. In fact, I wouldn't mind JT coming off the bench for that reason itself, with Hayes starting, in order to balance out the rotation a bit.

Continues to provide little value, either by starting or off the bench. Only one game played this week, the other two missed because of a sore hip. Who knows, maybe he's been playing hurt this entire season and will come back playing more in line with his career numbers. For the Kings' sake, I hope that is what happens, because right now Salmons looks like Kenny Thomas Part Deux.

Fréé Donté. Nothing more needs to be said.

In the final seconds of this game, the Kings committed two stupid fouls. The first, by DeMarcus Cousins, was a loose-ball foul that sent Alonzo Gee to the line with the game tied. Gee only hit 1 of 2, and Cousins redeemed himself a bit with a nice layup to give the Kings the lead with 2.9 seconds left. The next foul was incredibly dumb. Coming off a hand off from Antawn Jamison which screened off Isaiah Thomas, Kyrie Irving attempted to drive into the lane. Tyreke Evans was responsible for coming over to help after Thomas had been switched, and instead of staying in front of Irving, he attempted a steal, and wrapped up Irving, getting called for a foul with just 0.4 seconds left. Irving hit both free throws, and the Kings couldn't score with just 0.4 seconds left and lost.

I understand being frustrated, particularly since it was his brother, but that's something you should keep private and not on a public medium. He later apologized and removed the tweet, and Jimmer himself even apologized for him. Jimmer played 12 minutes the next night and scored 8 points, a decent game. Jimmer's fans and family need to realize that nobody in the NBA is just given minutes without earning them, and right now Isaiah Thomas is far outplaying Jimmer in his time on the court, leaving not many minutes for Fredette with Tyreke and Thornton also getting a lot of minutes. It's almost unfortunate, because Jimmer is the bench's best scorer (If only he were a wing!). All Jimmer can do is wait till his number is called and perform well when it is. He did that in Washington, and I suspect he'll do it again in the future. Just a hunch.

He's just been awful, and right now has seemingly played himself out of the rotation, just like Travis Outlaw. Those two guys were expected to be a big part of the rotation before the season, so that's disappointing.

In his first 4 starts, Isaiah has scored 78 points, tying the Kings/Royals franchise record for most points in first 4 starts with Otis Birdsong. This week featured a 20 point 3rd quarter against the best team in basketball, and a killer second half in Washington that carried the team to victory. This is all things one might expect from a developed lottery pick, but the Kings are getting it from the 60th pick in the draft, in his rookie year. To me, Kyrie Irving is the only guard from the 2012 draft playing as good as Isaiah right now. Isaiah was wrongfully snubbed of a trip to the Rising Stars game this weekend, but he's been snubbed his whole life. He was snubbed in the draft by 29 teams. It just adds to the chip on his shoulder, and will make him a better player for it. 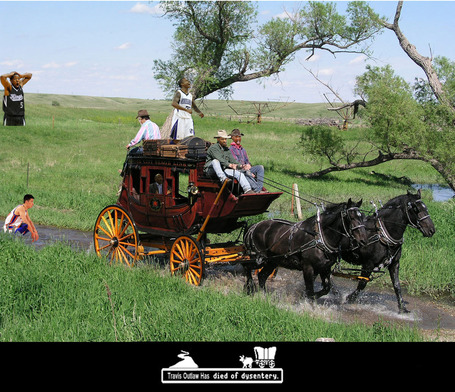 This weekend in Orlando

Stern: Mayor Johnson, I'm sorry to tell you that your expectations of the team's contribution in this are simply unrealistic. The team owners can not provide $65 million in cash upfront to help build the arena.

KJ: These team owners can not provide the $65 million.

KJ: No, David. Let's be clear. These team owners can not provide the money.
(Mayor Johnson snaps his fingers, in walks a stunningly handsome and powerful man with an enormous briefcase) David, I believe you're familiar with my friend Ron?

Burkle (setting briefcase heavily on the table): There is $65 million in this briefcase. I forgot the first case at the hotel, but luckily I had an extra one in the trunk. I'll leave this here while you two talk, I'm having lunch with Bill Clinton and Richard Branson on a spaceship.
(Burkle fist bumps KJ on his way out the door)

How Great Can Isaiah Thomas Be? by bench blob

"Why is John Salmons on the court??" 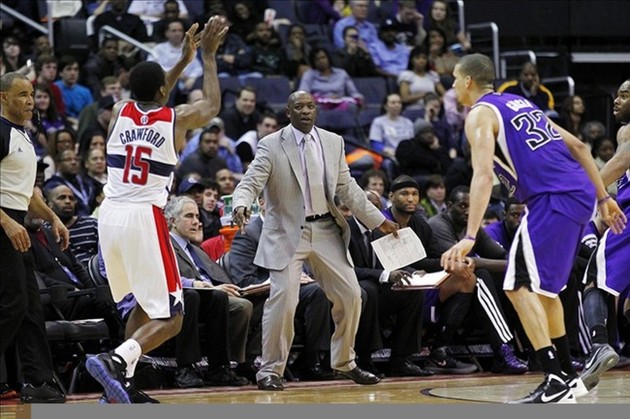 This week's caption contest winner gets an autographed "Life is a Negotiation" placard from David Stern.

Does an Arena deal get done in Sacramento? Do the Maloofs and the NBA do their part?

2/28 v. Utah W (We nearly beat the Jazz in their place last month, and we play much better at home.)

Nostradumbass Record for the Season: 21-12