Happy St. Patrick's Day all! Hopefully it's better for you than this week was for the Kings.

1. DeMarcus and Tyreke Are Safe

The Kings had a quiet deadline, but a couple bits of Kings-related news that came out of it was that the Kings had turned down offers of Nene for DeMarcus and Monta Ellis for Tyreke. Those moves would have likely made the Kings better in the short term but much worse going forward. This also shows me that the Kings will not trade either of these two guys for anything short of a legitimate All-Star, and those guys aren't often for sale. I always thought DeMarcus was safe, but it was relief to learn that Tyreke was safe as well, after rumors came out that the Kings were unsure on whether or not they'd offer Evans an extension this summer. Some took that to mean that Evans was on the block, but I took it to mean that they're going to let the market dictate Evans' value. He's been inconsistent the past couple seasons, but both those seasons have been weird (Plantar Fasciitis, Lockout). He'll be a Restricted Free Agent after next season, and the Kings can match any offers. We'll be able to see if a full off-season and then training camp with a more normal schedule brings out the Evans we've been waiting for after that historic RoY campaign.

2. Domination of the Celtics

This was an immensely gratifying win, both because of the horrendous losses that preceded it, and the fact that there were way too many obnoxious Celtics fans in the building. The Kings played one of their best games of the season and did so without rotation players Tyreke Evans and Francisco Garcia. They set season-highs in numerous categories. There wasn't a player that stepped onto the floor that didn't play well, including Travis Outlaw! The defense was good and the offense was even better. Marcus Thornton went into Buckets mode for his 36 points and the Kings exploded in the 3rd quarter for 41 points. Just a good old fashioned beat down that hopefully got the team back on the right track, ping pong balls be damned.

I almost named Jason player of the week, but he did lat a couple of goose eggs against the Hawks and Warriors. He responded big time against Boston and Detroit though, with incredibly identical games. He scored 21 points, had 15 rebounds, 4 assists and a steal while only missing two shots... in both games. The offensive part came in big part to Thompson re-discovering his jump shot, which he has hardly used as a weapon this season despite it being one of his most favored over the last few years. If he re-integrates that back into his game, along with his new and improved post-game, that'd be really, really nice.

It's about damn time that Evans and co. realized he needed professional help on just his shot, which has just been horrible this season. We'll see if it provides much needed results.

I can't say enough about how much Salmons has improved from the early season edition of him. Moving him to the bench and playing him as a Point Forward has done wonders for his confidence and our bench unit's cohesiveness. He had 4 or more assists in three of the four games this week, and his jumper is back to form.

With Tyreke Evans and Francisco Garcia out with injuries against Boston, Coach Smart went to Tyler Honeycutt early in the game to play significant minutes. It was nice to see Tyler get these kind of non-garbage time minutes like Hassan got the week prior, and I really liked his activity out there. I'm hoping to see more of Tyler in the future.

The Kings led the Pistons going into the half by a point, but it already was a high scoring affair, with Sacramento having 58 and Detroit at 57. The Pistons took it to a whole other level in the 3rd quarter though, scoring 40 points and missing just 5 shots for the entire period. Three players scored 28 or more points, with Rodney Stuckey (35) and Greg Monroe (32) leading the way. It was just an appalling defensive effort by everyone in a white & purple uniform.

We again got killed on the boards all week, with only the Boston game being a game where we beat out the opponents. Players need to box their guys out, and our guards/wings especially, as all too often I see an opposing teams guard/wing come swooping in to grab a rebound.

3. Lack of Energy Against Atlanta

The Hawks beat the Kings pretty good, but only because they made the proper adjustments at the half. This game was here for the taking for Sacramento, but they just didn't respond with the same kind of energy they had against Dallas or Boston for example, and the better, more veteran team won down the stretch. DeMarcus Cousins dominated most of the game, but nobody else really got going for the Kings.

He had as good a game as I've seen from him against the Hawks, but the other three games were big disappointments for Jimmer, in which he only scored 6 points in about 33 minutes of play. The Kings need Jimmer to be able to provide points off the bench because we don't really have any other scorers off the bench, aside from maybe Salmons.

We saw big numbers for Boogie in all four games, but they were of varying efficiency. Against Atlanta and Boston he was very good, but against smaller teams in Detroit and Golden State, he was not. He has fallen a bit too much in love with his outside shot for my liking, and does not go up nearly as strong as he should around the basket (something he says he needs to work on). DeMarcus needs to be at around 50% from the field, because 43-44% for a man of his size and strength is not going to cut it. He also needs to increase his conditioning so he can put more effort on the defensive end and the glass. He got completely worked by Greg Monroe (after having completely worked Monroe himself in their previous meeting) and the Warriors also did a good job of attacking him. We need to see consistent effort from DeMarcus, and while a part of that is his conditioning, it's also a mental aspect of the game.

The Kings came into this game thinking they were going to get an easy win with Monta Ellis, Stephen Curry and Ekpe Udoh not playing. The Warriors basically controlled this game from the tip, with their bench unit and the guys that filled in for the injured/traded stars lighting up the Kings from all over the court. It wasn't just a perimeter explosion either as the Warriors killed the Kings in the paint with layup after layup. This might have been the worst loss of the season, considering quality of the opponent and the fact that they were depleted and we were on our home floor. Just a flat out awful performance by the Kings.

In his Post-Game press conference after the Boston game, Coach Smart said that Marcus had "come out of la-la land" to have the kind of game we fell in love with him for last year. The other three games this week were atrocious affairs for Thornton, scoring in single digits twice and being very inefficient in all three games. His defense was also particularly bad. Marcus's defense needs a lot of work, but I did like his increased activity on that end v. Boston. He's got active hands, and can really play the passing lanes. The Kings need Marcus to be able to bring a consistent scoring punch, and on that front, he also needs to get more efficient instead of being a volume shooter.

It's amazing that not only has Isaiah been one of the best rookies from this past draft despite going last, but also that he's largely become one of the Kings most consistent players. He's also becoming one of the Kings most efficient players, with the highest True Shooting % on the team (.563). Isaiah's weaknesses aren't many and they're definitely ones that can be improved upon with experience. His biggest weakness, his size, is also his greatest strength, because it gives him the motivation to keep proving doubters wrong. Here's looking at you Isaiah.

(I don't agree with the sentiment, but it is a funny photoshop) This would be the ultimate test of Rondo's talent -

Threading passes to the iron skillets that are J.J. Hickson's hands.

"I'm telling you, that fart has caffeine in it." 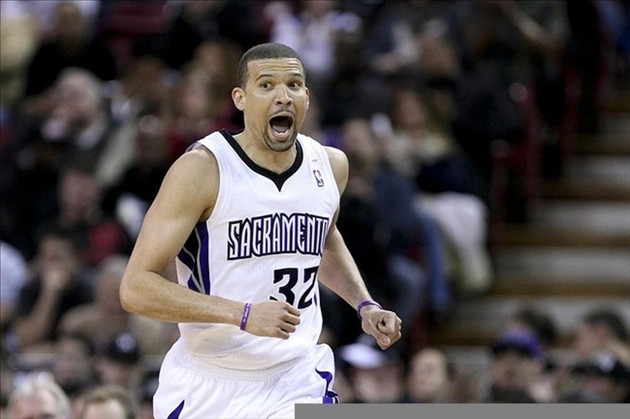 This week's caption contest winner gets $1,000,000 if they can successfully throw a ball into the outstretched hands of J.J. Hickson without him dropping it.

Are you disappointed, pleased, or content that the Kings made no moves this past week at the deadline?

I'm content. There wasn't a blockbuster to be had and just judging by who did get moved, I don't think the Kings could have really improved for what they were going to give. This summer will be incredibly important though.

v. Minnesota 3/18 W (Minnesota is no longer a bad team, but the Kings have hung tight with them in their two other games, both on the road. This time it's on our floor)

v. Memphis 3/20 L (Memphis is the epitome of one of those non-sexy teams the Kings don't get up for, AND they might have Zach Randolph back. This team just matches up incredibly well with us.)

v. Utah 3/22 W (Cousins just straight up dominated Jefferson and Millsap last time. Here's hoping he can do it again)

Nostradumbass Record for the Season: 25-19