"It's not leaking - It's overflowing."

Share All sharing options for: "It's not leaking - It's overflowing." 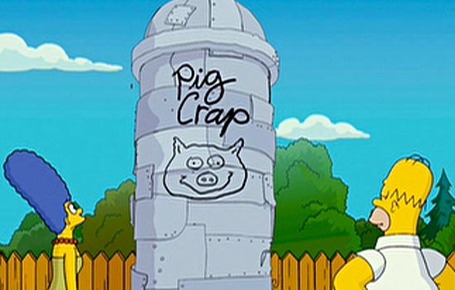 One man's tank is another man's silo of pig crap

I think that I am pretty much on record when it comes to tanking. Simply, you don’t. You play to win, always. Your coaches have to coach to win, and your players have to play to win. There is simply no appropriate way to convey to your coaching staff and players that they should perform at less than their best. And at the end of the day, it’s simply not worth it, as you are not guaranteed anything more than a few more ping pong balls in the hopper. Finishing with the worst record gives you a 1 in 4 chance at winning the Anthony Davis derby, while finishing with the 5th worst record leaves you about a 1 in 11 chance. No matter what, the odds are against you. Sure, the higher the better when it comes to draft position, but not if it comes at the expense of telling your young core of players to back off the gas.

The good news is that because the Kings already suck, tanking is not really necessary. The Kings are destined for a top 10 pick for the 5th(!) straight year, no matter how hard the team does or does not try. USA! USA!

I’m also pretty much on record that you just don’t hand minutes to young players. Playing time is not a birthright, and it must be earned and not just granted. But if ever there were a time to deviate from that rule, now may be the time.

The Kings roster (with a couple of exceptions), is not so much deep as it is wide. Unlike the elite teams that possess star players and capable reserves, the Kings are chock full of young players with varying levels of potential, and players that would be core reserves for some teams and bench fodder for others. I think that it’s fair to say that it would not leave a gaping hole on this team if any of its veterans missed the rest of the season. I don’t see the Sacramento Kings being particularly more competitive with or without guys like John Salmons, Chuck Hayes, Travis Outlaw or Francisco Garcia. And that’s not meant as a slam at them. It is merely an admission that the canyon between the Kings being consistently good and where they are now cannot be bridged by the talents of these gentlemen.

And truth be told, while these guys may be better than the young players that are sitting behind them, the difference might be charted at this point more in experience than actual physical ability. Chuck Hayes is Stephen Hawking if you compare his defensive knowledge to Hassan Whiteside, but Chuck Hayes is also Stephen Hawking if you compare his physical chops to Hassan Whiteside. John Salmons is a much more effective lead guard off the bench than Jimmer Fredette right now. So what? How is that really helping the Kings right now?

Please understand, I’m not saying cast Hayes to the wind. He’s signed for three years after this one, and he can fill a nice role up front. And unless the Maloofs surprise me and actually decide to chow down on wholesale contract, there is no way that they will amnesty John Salmons.

What I am saying is that at the end of this home stand, there will be 19 games left in the season. So why not shut down Hayes for the rest of the season and let him focus on becoming completely healthy for next season? Why not give Salmons the rest of the year off? Why not let Garcia (guaranteed $6.1m next year) and Outlaw (guaranteed $9m over the next 3 years) know that the organization has some decisions to make as it pertains to guys like Jason Thompson, Donté Greene, JJ Hickson, Hassan Whiteside, and Tyler Honeycutt and would like to clear the playing time for the balance of the season for the young players? Why not open a little more time for your most recent lottery pick?

Of course, the young core still suits up and they play as usual. Cousins, Evans, Thornton and Thomas are all still developing entities.

So, let’s say that Hayes/Salmons/Garcia/Outlaw are replaced by Whiteside/Fredette/Honeycutt/Hickson. Did the team just get appreciably worse? My unscientific guess is that perhaps the squad goes 5-14 or 6-13 instead of 7-12. And in return the Kings get to really kick the tires of all of their young players, while running the team out there for the last month of the season and allowing the players that are suited up to play full throttle, while also allowing the coaching staff to coach to win, albeit with a few less (small caliber) bullets in the chamber.

So that’s where I’m at, anyway. If shelving guys like Chuck Hayes and John Salmons is considered tanking in today’s NBA, then so be it. As a fan, I want to see the youngsters for the balance of the season. And I say this not caring one iota about draft position. We’re going to wind up with a top 10 pick and we’re going to get a player that will hopefully improve the team. If we get lucky and land the top pick, even better. But what I know today is that we already have Hassan Whiteside and Tyler Honeycutt and Jimmer Fredette, and I’d like to see more of them as the season winds down.