Share All sharing options for: StR Crafts Project: Build-a-Bear of a Kings Team 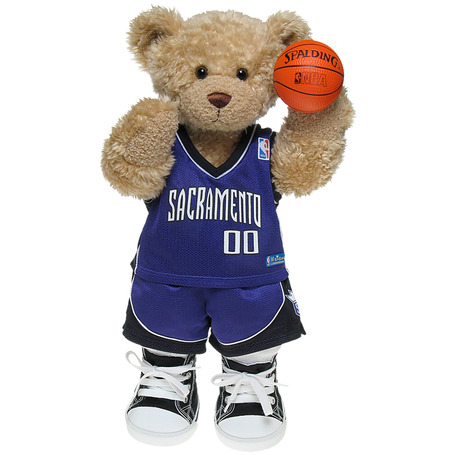 Okie dokie. Now that it’s beginning to look like that we might have a team around these parts for a few more years, the question becomes how do we set to getting ourselves out of the lottery and back into the playoffs? And how much longer do we take to do it? Now, we’ve got your asinine trade thread and your draft mongering and your free agent fantasies, but what we really need is a little one-stop shopping mecca where you can really get your rosterbation on. And wouldn’t you know it, that’s just what we’re going to do, right here and right now.

So here are the rules: There are no rules, other than the team that you build should meet NBA parameters for salary and number of players. Beyond that, let your conscience be your guide. The more authentic your effort, the more authentic will be the responses to your ideas. For our purposes, let’s say that next year’s salary cap will be the same as this year, which is roughly $58 million, and let’s set the number of players anywhere between 12 and 15. Here, let me show you how easy it is to make a complete idiot out of yourself…

First, I trade Tyreke Evans for Rajon Rondo. The 26 year old Rondo is slated to earn a tidy $11m/$12m/$13m over the next 3 years, while the 22 year old Evans would earn $5.2m next year before reaching his qualifying offer. Could this trade happen? Well, the rumor is that the Celtics have had it with Rondo’s mercurial personality, and that they had made an offer to Golden State for Steph Curry but that the Dubs balked (I should have mentioned that rumorbation sometimes accompanies rosterbation). If the Celtics would take Curry, could Evans be that far off the grid, especially when you factor in Curry’s porcelain ankles? There would certainly be a risk involved for the Kings here, but when you’re in a smaller market you have to roll the dice a little and hope for the best (see Richmond for Webber). Rondo is an assist machine and a voracious defender. The Kings get a little older without getting old, and they add a floor leader with championship experience. The cost is Evans, and I would hate to lose Tyreke Evans. But Rondo is the better player by any reasonable and objective measure.

By obtaining Rondo, I now need to keep Marcus Thornton in my starting lineup, at least for now. Rondo, like Evans, is not a gifted perimeter shooter. The difference is that Rondo pretty much realizes this and takes very few of his shots from distance. Thornton’s shooting ability will be needed to maintain floor spacing for the starting unit, and he should benefit greatly from Rondo’s passing presence. Isaiah Thomas becomes the super sub off the bench, and the Kings could still go small with a 3-guard offense from time to time (though this group gets smaller when you consider that Rondo is about 5 inches shorter than Evans). Jimmer Fredette also fits into this mix as Thornton’s backup and again in the 3-guard set. Now, this group lacks length, but you could go to Francisco Garcia or John Salmons in small doses as needed. Basically, you’re going to play smaller in the backcourt, but you’re going to play up-tempo and force the action.

OK. By adding Rondo and subtracting Evans, my 2012-13 salary total is now at $50.1m, without investing any salary in Jason Thompson, JJ Hickson or Donté Greene, who are all RFA’s. It does include picking up the $850k options on Tyler Honeycutt and Hassan Whiteside.

For the Kings to do what I want them to do next, they would need to amnesty Salmons or Garcia. It would be cheaper for the Maloofs to amnesty Garcia, and Salmons could probably fill the role of backcourt length defender a little better than Cisco. But this is my fantasy, so I bid adieu to Salmons and lower my salary liability to $42m. I then turn around and overpay (slightly) for Ryan Anderson. Anderson will be an RFA for Orlando, and they will be hard pressed to match any sizeable offer (unless they deal Dwight Howard, in which case they may still not want to overpay for RA’s services). I offer 4 years, $36-40m. This probably an overpay of about $2-3m a year, but look what you’re getting: a 6-10, 240 pound power forward that is currently sticking three 3’s a game at a better than 43% clip. And he’s no one-trick pony, as he can also shoot from mid-range, take it to the rim, rebound (7.5 a game playing next to Howard), and play above average positional defense, though a shot blocker he is not. He is the perfect yin to DeMarcus Cousins’ yang. Though only 23, he will be entering his 4th season next year and will have 3 years of playoff experience under his belt. Let’s bring the kid home.

My other starter up front is Cousins, of course. With Rondo and Anderson added to the starting lineup at the expense of Evans and Jason Thompson, Cousins is now surrounded by better talent and talent that is more conducive to his game. Cousins is doing this season what I thought he would do next season. With another year under his belt and the addition of Rondo and Anderson, Cousins could flirt with all star status.

My bigs off the bench are Hayes and Whiteside, and I now offer Thompson 4 years at $16-$20m. If that’s not enough to keep him then off he goes. Otherwise, I’ve now brought my salary base up to about $55m, leaving me enough room to sign my 1st and 2nd round picks.

Last but not least, I draft a small forward, figuring that between Harrison Barnes, Michael Kidd-Gilchrist (if he doesn’t stay at Kentucky), Thomas Robinson, and Perry or Terrence Jones, one of those guys will be available and will be immediately better than anyone currently on our roster. Yep, Mr. "Best Player Available" is now drafting for need. Tyler Honeycutt gets a crack at it, too, with a fully healed Travis Outlaw sitting there as an emergency option. For this season at least, small forward will continue to be our least productive position. But with the additions elsewhere, this team can get by as the young wings develop, with the hope that either Honeycutt or the rookie eventually grabs the brass ring.

Recapping, up front we have Cousins, Anderson, Thompson, Hayes and Whiteside, with <rookie>, Honeycutt and Outlaw at small forward, and Rondo, Thornton, Thomas and Fredette in the backcourt. There will be a lot of lower rung big guys that the Kings can spend their 2nd round pick on, and then they can sign a low miles free agent guard to fill out the roster…or the other way around, since we’re talking about the 13th and 14th roster spots here.

There you go. In Rondo and Cousins you have current and potential all stars, with Anderson and Thornton being solid 3rd/4th guys. Your bench has starting experience and decent depth. The team is not without its imperfections, but I feel that this squad would compete for a playoff spot immediately, with still a lot of potential for growth from what would still be a pretty young squad (roughly 25 years of age on average). You’re pretty much hitching your wagon to how good Rondo and Cousins can become, but all things considered, that might not be too bad.

And that’s how it’s done – it’s just that easy! Now it’s your turn. Use the thread and tell us how you’d build a better Kings team. Dazzle us with your brilliance. Amaze us with your dexterity. Enthrall us with your advanced stats knowledge.

Or just bullsh*t your way through it like I did…