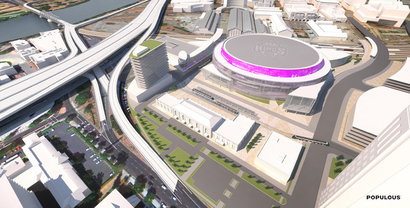 Coming 2015 to a Sacramento near you!

Going into last weekend's All-Star game, a big question was whether or not the Maloof family would pony up the rumored $70-80 million the city was expected to ask for as a contribution to a new downtown arena. Monday, after two days of negotiating and a year of fighting to keep the team in Sacramento, the Maloofs and Mayor Kevin Johnson announced that they had successfully constructed a framework of a deal that both parties were happy with. It was a great moment, and one that I will never forget. This battle started over a year and a half ago when Here We Stay was founded after the failure of the Convergence Plan. The announcement on Monday were a huge step towards making our original goal a reality. The city council vote this Tuesday will be another one, and I encourage everyone who can to come out and hopefully witness local history be made.

3. Isaiah Thomas Getting the Respect He Deserved

Isaiah was finally recognized for his stellar play in the month of February as the NBA named him the Western Conference Rookie of the Month. He's the steal of the draft to be sure, and I wouldn't be surprised if this isn't his only Rookie of the Month award.

This week Jimmer seemed to come out of his shell at times. He still has problems with teams throwing pressure at him, so to make him more comfortable, Keith Smart decided to have John Salmons bring the ball up the court as a Point-Forward type. In each game this week, Jimmer had a stretch where he looked like the best player on the floor for 4 or 5 minutes. Against Utah he came in and scored 5 points and dished two assists in 8 minutes. In the Clippers game, he led the bench in the second quarter to a 22-4 run, capped off by two threes in a row. Finally, in Los Angeles he was a big part of the Kings comeback attempt in the fourth quarter. Games like this can only increase his confidence and the team's confidence in him. I'm looking forward to more consistency from Jimmer going forward.

5. DeMarcus' Dominance Against Jazz and Clips

Both of these opponents feature premiere big men. Utah has Al Jefferson and Paul Millsap, as well as Derrick Favors (#3 pick two years ago) and Enes Kanter (#3 pick last year). The Clippers of course have Blake Griffin and DeAndre Jordan. In both games, DeMarcus looked like the best big man on the court. He dominated inside against Jefferson and the Jazz, scoring 22 points to go with 18 rebounds, and against Griffin/Jordan, he had 23 points, 10 rebounds and 3 blocks. He also got off to a hot start against Andrew Bynum and the Lakers, but appeared severely fatigued in the second half of that game, and he missed all of his shots there, finishing just 5-16. His conditioning still needs a lot of work, but considering this is just his sophomore year and we're seeing just how dominant he can already be, I can't even imagine how could he'll be in his prime.

Hayes has finally started to come into his own. Defensively, he's incredibly hard to back down, and does a great job of swiping the ball away when his opponent turns around. On offense, he's been great from the high post, finding cutters to the rim, and also handing it off while simultaneously screening for shooters like Cisco. Now if he could just make his shots around the rim consistently, Hayes would be just the guy we hoped we had gotten.

John Salmons and Francisco Garcia have paired up to be quite the bench combo, both offensively and defensively. Both players shot very well this week, and were part of units that were among the teams best this week in stretches against the Lakers and Clippers. Salmons was playing very well in one-on-one situations on defense, and Garcia did a great job of coming over to help, getting steals and blocks. These two guys were a big part of why the Kings bench was so much better this week.

Tyreke is still producing in his new role at the three spot, but he's not been efficient at all. Against the Jazz, he scored 13 points on 4-12 shooting, and against the Clippers had 18, but on 7-21 shots. His jumper has just continued to be awful, almost to the point where I'd rather see him not even shoot them. Evans also hasn't been finding his teammates as much, with just 7 assists over this entire week. Evans needs to take his slashing mentality off the ball and follow Marcus Thornton's route of cutting to the rim.

Injuries are never fun, even when the player has been playing terrible. J.J. suffered a hip pointer after leaping up really high for an offensive rebound and not landing well. The results of his MRI were negative but he will miss the rest of this road trip. There are also rumors that the Kings are shopping Hickson, and I wouldn't be surprised if these are his last couple weeks on the Kings, as we approach the trade deadline.

3. Turnovers in the Clippers Game

It's clear that turnovers were a big part of the reason the Kings lost the game against the Clippers. In an 8 point loss, the Kings gave up 27 points off of 18 turnovers. Isaiah Thomas led the team with 6, Tyreke Evans had 4, and DeMarcus and Jimmer had 3 each. The game was a physical one, particularly in the second half, and that combined with the turnovers seemed to take the Kings out of their game.

4. All the Easy Shots Missed in the Lakers Game

The Kings missed several point blank shots or easy attempts in this game that could have potentially changed the result. Jason Thompson was just 1-8, and almost all of those attempts were right by the basket. Donté Greene shot just 2-10, mainly because he kept shooting threes despite not being a good three point shooter. He also missed a dunk that was blocked by the rim. There were several other layups throughout the game that the team screwed up. These are the kinds of shots you have to hit if you want to beat at team like the Lakers.

This week is the best week that has happened to the Kings in the Sacramento-era, because it likely resulted in them staying in Sacramento. For that, there can be no ugliness this week.

Thornton has continued to provide scoring in bunches, and has done so much more efficiently. This has largely been due to his increased off-the-ball movement. Thornton's three point shot is good enough to be a consistent threat, but in the past he's often relied on it too much. Now though, he's cutting to the basket and his teammates are finding him. I'd like to see Tyreke Evans make the same effort to move off the ball, because with his increased size and athleticism, he'd be even better at it than Thornton is.

Two really good ones this week, both deserve love.

Time to make this happen!

We're willing to be a cap mule

Easy mistake to make, I know.

Credit Where Credit is Due by andy sims

Crawford fakes out the whole King's team using the old Phantom Ball Trick, which results in a foul against Cousins. 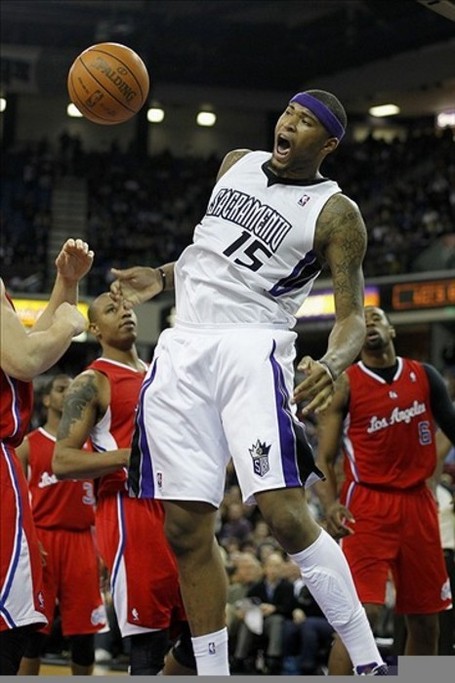 This week's caption contest winner gets to attend SACRAMENTO Kings games whenever they please for the next 100 years because HERE WE STAYED.

Now that the threat of the Kings leaving seems to no longer be the #1 concern among Kings fans, what is your biggest concern going forward?

@ Phoenix 3/4 W (The Suns beat us at home before the break and the Kings looked flat throughout. Hopefully they'll come out with much better energy)

@ Denver 3/5 L (The Nuggets have beaten us by a combined 56 points in the two games we've played them this year. They'll be without Danilo Gallinari this time, but it will also be the Kings 4th game in 5 nights.)

v. New Orleans 3/7 W (If there is one team we're legitimately better than in the West, it has to be the Hornets right? We have beat them twice already this year, let's make it three in a row)

v. Dallas 3/9 L (I would love this to be a revenge game since they absolutely humiliated us in Dallas last time, but this is still a team that is much better than us)

Nostradumbass Record for the Season: 22-14