Share All sharing options for: The Bleak, the Sad, and the Ugly: Week 16 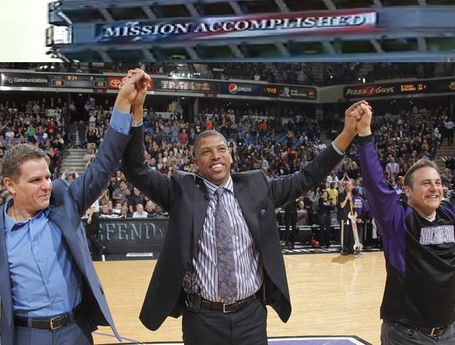 Due to the extraordinary and unfortunate circumstances of this past week, this will not be the typical GBU you all have grown accustomed to. Hopefully, you will all still find it worth reading.

What a week. Never as a Kings fan have I felt so defeated, so distraught, or so emotionally exhausted. For much of the past two years, watching the team has always been clouded by the prospect of them leaving. Then just one month ago, it seemed as if that cloud had cleared, and that a new era of hope and prosperity was set to occur in Sacramento.

The announcement of a framework of a deal appeared to be a huge hurdle that was overcome. Another huge hurdle was leaped the next Tuesday, when the Sacramento City Council voted 7-2 in favor of the proposed term sheet. Gavin Maloof himself was in attendance, in a meeting where the entire term sheet was read basically verbatim. Nothing was said on the part of the Maloofs other than how happy they were.

Fast forward a month and we begin to hear that there are objections to the plan, in particular, the fact that the Maloofs did not want to pay their share of the pre-development costs. While annoying, this was not a deal killer. David Stern, commissioner of the NBA and supportive of the city of Sacramento throughout this process, stepped in and fronted the first $200,000 of pre-development costs on behalf of the Kings in order to keep the process going.

But pre-development was not the only issue, and the Maloofs, led by George Maloof, went to the Board of Governors meeting in New York and laid out a lengthy presentation on why this was a bad deal. Many of the points they made were the same arguments laid out by arena opposition for months prior that the city and others had done a diligent job of shooting down. Yes, this new downtown arena had some risk. But it also had a lot of potential, the potential to create a new vibrant downtown in the city of Sacramento that would create jobs and potentially kickstart the economy.

But the way George Maloof and his newly hired economist acted throughout their presentation, it was as if they were trying to spin it as if them not taking the deal would be doing the city a favor. George Maloof talked several times about how the agreement reached in Orlando was always non-binding, and the optimism expressed after the meeting was because of the progress and not because anything had been committed to. According to George, there were several major issues that still needed to be resolved. There is no certainty on when exactly the Maloofs voiced their displeasure, with George saying everyone knew in Orlando and the Mayor saying he heard it for the first time in New York, but the fact is, the way the Maloofs went about it effectively killed the deal dead in its tracks.

The offensive thing to me in part was the way George appeared insulted when a reporter asked him if the deal was dead. He instead deflected that question, saying that if the city wouldn't negotiate to make a better deal, that was on them. Some of the issues the Maloofs had with the deal were fairly reasonable and could have been worked out, while others, including the fact that the Maloofs did not want to put up collateral on the refinanced City loan, the fact that they wanted more control over the arena process despite just being tenants, and the fact that they could not accept revenue splits with AEG as currently stated were all deal breakers. KJ basically said that to put some of the things they wanted into the term sheet would have been political suicide.

George Maloof also made a big deal about having to work against a deadline. Keep in mind the fact that these deadlines only existed in part because of the Maloofs attempted relocation last year. They were shot down by the NBA and the city of Sacramento was given one year to come up with a reasonable financing plan for a new arena. The city went above and beyond in order to create a deal, and came farther along in the process than ever before. When the City Council approved the term sheet in early March, the deal seemed all but done. That is until the series of events this past week.

George Maloof and his family killed the arena deal this week and there are no ifs, ands, or buts about it. David Stern was clearly frustrated and displeased, but the Maloofs were not doing anything illegal. I honestly believe him when he says there is nothing more that he can do. Stern acknowledged the efforts of the Mayor and the city of Sacramento for stepping up in a huge way, but if the Maloofs choose not to accept the deal that was created, a deal in which the NBA would have fronted $67 million and gifted $7 million to the family, what else could the NBA have done?

So for now we are back to square one. The Maloofs have effectively destroyed any goodwill they had with the Mayor, the city, and their fans. Many fans are calling for boycotting the Maloof Family and their enterprises altogether. Personally, I see where people are coming from. I don't and will not give the Maloof Family another dime of my money. Last year, after it was announced the Kings were staying in Sacramento, my father and I decided to buy season tickets for the first time. We wanted to show our support for the team. We wanted, essentially, to put our money where our mouth is. Then again, very shortly after the deal was agreed to in principle in Orlando, we opted to renew our season tickets, "renew our legacy" as the Kings ticket campaign called it. As of yesterday, we both feel our trust has been betrayed, and we are in the process of cancelling our renewals. I can't speak for anyone else, and will not ask people to follow in my footsteps. That's their own decision to make.

Some feel that this is exactly what the Maloof family wants, that to stop going to the games and supporting the team will give them the excuse they need to relocate. I disagree. We as fans did about all we could this year, and for the past 27 years, to prove our loyalty and support for this team. The city proved its support for the team by working diligently for the past year to come up with a viable plan, and ended up with almost $255 million on the table that would have gone to a new arena. Yet the Maloofs still opted to essentially spit in our face. If they want to use decreased fan attendance and support as an excuse to move, fine. Last year their excuse was that they do not have a modern facility. Yet when presented with the means to a modern facility, they balked.

The Maloof Family has claimed repeatedly, and did so again on Friday, that it wants to stay in Sacramento and make it work. Actions speak louder than words though, and it speaks volumes to me that when the time came for them to truly commit to Sacramento, they were unable to do so. The Maloof family itself, ironically, failed to "Renew its legacy", choosing instead to tarnish it.

I will continue to support the Sacramento Kings team with my heart if not my money. I love watching DeMarcus Cousins grow into a dominant force, Isaiah Thomas surprising everyone, even watching Travis Outlaw frustrate me. But I will not, CAN not, support the Maloof family any longer. They have betrayed my trust, and if the future of the Sacramento Kings is to remain in Sacramento, I don't see how the Maloofs can remain in the picture. It's up to them to change my mind, and it will take a lot to do so.