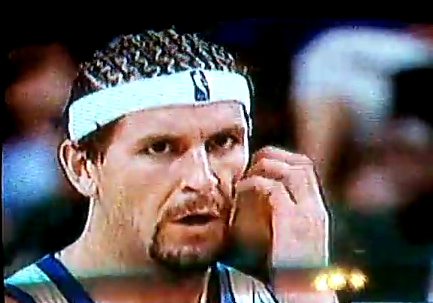 But when it comes to memorable grooming -- true character-defining anti-swag -- nothing tops 'Braid' Miller.

The scene: it was preseason in 2007. The Kings had missed the playoffs for the first time in almost a decade the prior season. Eric Musselman had been fired as head coach, replaced by Bill Fuller. The core of the team was, hilariously, Miller, Artest, Mike Bibby and Martin. Things got off to an awful start as Miller lost some sort of bet, resulting in cornrows for a few days of action.

This was before the days of Twitter, mind you -- we all learned of the fashion manifesto when the dude popped up on Comcast SportsNet. (I was actually in the arena for this one, Kevin Durant's professional -- albeit preseason -- debut.)

Thankfully, the hair style would be short-lived. The Kings' struggles would not.

This is where the thread gets fun: give me your top grooming moments in Kings history. Our friend Jimmer Ham has already suggested Greg Kite's mustache, and I am not about to disagree. Let them rip.