Peeing in the Cheerios, or the Summer of "If Only..."

Share All sharing options for: Peeing in the Cheerios, or the Summer of "If Only..." 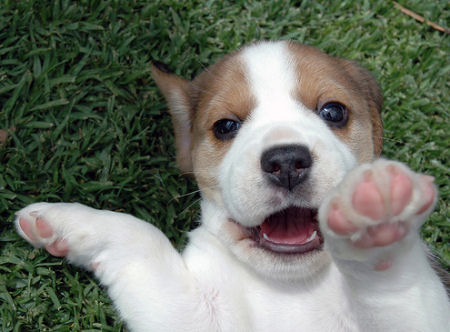 Hi, I am a very cute puppy. My job is to take your mind off the current plight of your Sacramento Kings.

I was thinking the other day (I can always tell when I’m thinking because my head hurts and I smell wood burning) that Kings fans are multi-taskers unlike virtually any other NBA fan base. I mean, look at the things that we have to concern ourselves with:

That’s some list. And it’s a list that we will carry throughout the summer. The summer of "If only…"

Look at the above list. Now, reduce the list to those players that you would like for the Kings. Next, figure out how much it would cost to obtain those players. Proceed to factor in how much money current ownership is likely to spend on free agent players, considering that the team can pretty much attain the league salary cap minimum by simply signing their first and second round draft picks (roughly $48.4m in player payroll for 13 players, and that does not include Jason Thompson, Donté Greene or Terrence Williams).

We have salary cap money available, and there is going to be talent out there that could make this team better. But ownership has shown no willingness to spend money on players for the past several years (at least dating back to the trading of Kevin Martin). Andrei Kirilenko? Yeah, for all we know, an offer was made, Kirilenko declined it, and the team said, "Well, if you ever change your mind…" Remember, had Kirilenko signed when the rumor of the offer first came about, the Kings likely would not have signed Hayes or Outlaw, and the team would still be floating around the league cap minimum. Too bad we are forced to temper our free agent enthusiasm with the reality that ownership is not investing in their product (at least not to NBA competitive levels). If only…

If teams like Memphis or Atlanta disappoint in this year’s playoffs, there is at least a remote chance that players like Josh Smith or Rudy Gay could possibly be made available. Mind you, they won’t be free (the cost being draft picks or Tyreke Evans or Isiaiah Thomas), but there would certainly be enough smoke there to have a conversation about it. Unfortunately, those players would cost money, driving the Kings well over the minimum cap, so the opportunity goes from not very likely to almost completely unlikely. Once again, the ghost of M*loof present has snatched your daydreams from you. If only…

The front office needs a kick start. Fresh blood, fresh ideas, fresh money…well, so much for that idea. What’s the point in shaking up the front office if you’re not going to earnestly re-invest in the team, players, coaching staff, and scouting. If only…

A pretty frustrating exercise, eh? But for me, somewhat cathartic. Given that I do not want to spend all summer peeing in everyone’s Cheerios by responding to every trade or free agent idea with "Unfortunately, that will never happen under current ownership," I have determined to just take one giant pee right here and now. By emptying my bladder of all M*loof-related urine, I hope to now proceed without having to rail about ownership’s penny-pinching ways whenever we have discussions about the roster (I reserve the right to say whatever I want about those pricks in any arena-related posts or threads).

I do this now, because I want to be able to talk basketball this summer without depressing the hell out of myself (and everyone else) over current ownership. It’s a fool’s paradise, for sure, as we all know the truth of the matter. But as a Kings fan for going on 27 years, I’ve talked myself into living in a fool’s paradise before, and I can do it again. I certainly won’t hold it against anyone that feels the need to drop M*loofian reminders in the basketball-related threads, but I’m going to do my damndest to dream in the dreamer posts and threads, and restrict the harsh and unpleasant reality of current ownership to the arena and owner-related posts and threads. Separation of M*loof and State, I suppose.

So when I go on a Ryan Anderson or Ersan Ilyasova or Rudy Gay or Josh Smith bender, please understand that I am fully aware how incredibly terrible the odds are that it will ever happen. But I’m going to allow myself at least a little bit of a dreamscape. As a Kings fan, I believe that I’ve earned it.