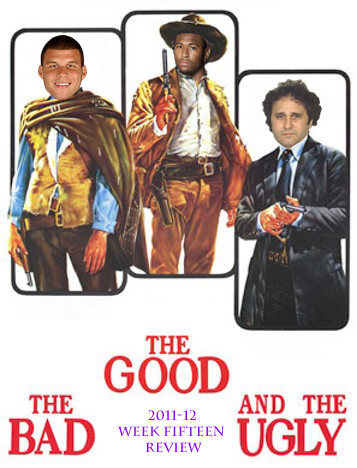 2. Taking Care of Business Against the Timberwolves

I don't know why, but this win against the short-handed Timberwolves feels so long ago, yet it's been just a week. This is the game in which the Kings lost Marcus Thornton early to a calf injury. Jimmer Fredette stepped up admirably in his absence though, having perhaps his best game of the season with 19 points in 25 minutes off the bench. Tyreke Evans had a near triple-double and this game was Sacramento's from the get-go as they were able to weather Minnesota's comeback attempts.

Williams continued to prove that he was a good signing by the Kings, scoring in double-digits in 4 games, including a season-high 21 points against Houston. Curiously, Williams did not start at all this week in Thornton's absence, as Smart seems to prefer him coming off the bench. Whether that is because he simply likes the fit or because Williams hasn't been with the team long, who knows. Whatever the case, Williams is making it hard for the Kings to not re-sign him this off-season to a reasonable contract.

4. Isaiah Thomas on Both Ends of the Court

Isaiah Thomas has shown he can score on just about anyone in this league already, but he has also shown that he can guard some of the best players in the league as well. This week he had some tough matchups in Steve Nash, Chris Paul and Gordan Dragic, and he held his own. According to MySynergySports, Isaiah is 52nd in the league as an Isolation defender, and 68th in guarding the P&R ballhandler. Offensively, he's a master of scoring in the P&R, 4th best in the entire league with a Points Per Possession of 1.4. That's because Isaiah can drive or step back and shoot the jumper in those situations. Isaiah also won the Western Conference Rookie of the Month for the 2nd month in a row, joining Tyreke Evans as the only Kings rookie to do that. He has a good chance of winning it for April as well.

5. Jimmer as a Scoring Punch

Jimmer had a few bad games this week, but he also had a few very good games in terms of scoring the ball. To me, this is where Jimmer's promise lies in the league. It's what he excelled at in college, and it's where he can excel in the NBA. He's a great spot-up shooter already, and he also does a decent job of getting to the basket (if not finishing, which is where that floater will come in handy). Terrence Williams has been great for Jimmer because he constantly searches for him when he's open. Jimmer needs to work on his defense to justify playing time however, and on offense, he needs to learn how to deal with pressure better. He also needs consistency, but that comes with experience so I'm not too worried about that yet.

Hassan finally got an extended look against Houston and actually played very well, particularly on the defensive side of the ball. Hassan still is incredibly raw, but the potential is massive. More looks at Hassan as this dreadful season concludes wouldn't be a bad thing.

If any statistic shows how key Marcus Thornton is to this team it's that Sacramento is just 1 and 9 without him. Thornton is the team's leading scorer and most reliable perimeter threat. Having him on the court helps in spacing and in creating offense out of nothing. Not having John Salmons hurts our depth, forcing the team to rely on guys like Greene, Outlaw and Garcia. Now we don't even have Garcia thanks to a concussion. The Kings could use depth at just about every position but Shooting Guard.

After having improved in this category so much the last few weeks, we've seen regression in this area, both in moving the ball and protecting it. Three of the five games this week had fewer than 20 assists, and the Houston game was particularly bad, with just 15 assists to 21 turnovers. Not having Thornton or Salmons hurts us in this regard.

Tyreke's per game stats don't look all that bad, but unlike his Rookie Year, his numbers are incredibly inconsistent. He'll have games where he has near triple-doubles like against the Timberwolves, and then he'll have games like against Houston where he scores just 6 points. Evans has had a rough season, having to adapt to a new coaches system and a brand new role. This offseason will be very important in his development. He needs to develop some semblance of a jumper/mid-range game and he needs to dedicate himself on the defensive side of the ball.

Jason looked like he had turned a corner in his development a couple weeks back but has struggled ever since coming back from his ankle injury. He had one good game this past week, in which he had 15 points and 16 boards against the Clippers, but the others were disappointing.

Chuck Hayes, Travis Outlaw, Donté Greene, and Francisco Garcia currently constitute the bulk of our depth aside from Terrence Williams and Jimmer Fredette and they have ranged from below-average to flat-out terrible. Depth will only be rectified by the team actually signing quality players.

1. Officiating for the Clippers

The officiating in both games against the Clippers was severely lopsided, in the first game especially. In that one, it had a severe impact on the game, particularly in limiting DeMarcus Cousins, who fouled out in just 18 minutes. The second game was just salt in the wound, as the Kings wouldn't have won regardless of the officiating. Still, this young team will need to learn to fight through nights like these when the whistles aren't going their way.

2. Ugly Loss at Home to Houston

No energy, no control and Houston dominated throughout, just straight up whooping the Kings on their home floor to send them to a sub-.500 home record for the first time this season.

We got word this week that the Maloofs have now put in a documentation request and have sent letters talking about all the aspects of the plan they feel are unsuitable. The kicker is that they don't think the city can get this done in time for the 2015 season while the Maloofs are the ones causing the initial delays. The Maloofs will meet with the NBA Board of Governor's this Thursday and it is hoped that we will finally have some clarity on this issue after that point, good or bad. Like Mayor KJ, I'm tired of being jerked around. If you haven't yet, send a letter to the NBA.

DeMarcus struggled as the week went on, but damned if I don't give the guy who scored 41 points in a game Player of the Week. The last Sacramento Kings big man to score 41 points in a game was Chris Webber, and before that it was Antoine Carr. The only players in the last 16 years to score 41 points and have 12 rebounds in a game before the age of 22 are DeMarcus Cousins, Shaquille O'Neal (3x), Blake Griffin (2x), Kevin Durant (2x), Elton Brand, Andrew Bynum and Antoine Walker. Cousins also started a bit of a rivalry between himself and Blake Griffin this week with his comments. Griffin got the better of him on the court, so DeMarcus will have to back up his words with action next year. It has set the stage for years of back-and-forth between these two however and I for one can't wait.

you wanna be babied, Blake? i'll take care of you.

There's no miscommunication here. The deal in Orlando states clearly the Maloofs will pay 25% of the pre-development costs. George Maloof burned up the local media the other day stating that a tenant paying pre-development costs is unprecedented, and anyone who says they promised to pay this is "lying".

I read through the document. It took me all of about an hour. It's 45 pages and the Kings are clearly listed as paying those costs on page 10. If this is such an "unprecedented" idea and the Maloofs are so vehemently against paying pre-dev costs, how did that document make it out of Orlando with that breakdown?

No, the logical conclusion is that cheap owners raised hell about the deal the first moment they had to actually cut a check.

Normally, I'd agree that the Maloofs are "incompetent to the extent of their ability to communicate clearly". But they haven't just doubled down on this statement, they've pentupled down. Every day, George Maloof or Eric Rose go out of their way to publicly state that they aren't paying.

This isn't a miscommunication, it's cheap-fuckism.

"Sorry about that, Violet. At first glance I thought you were Chuck Hayes." 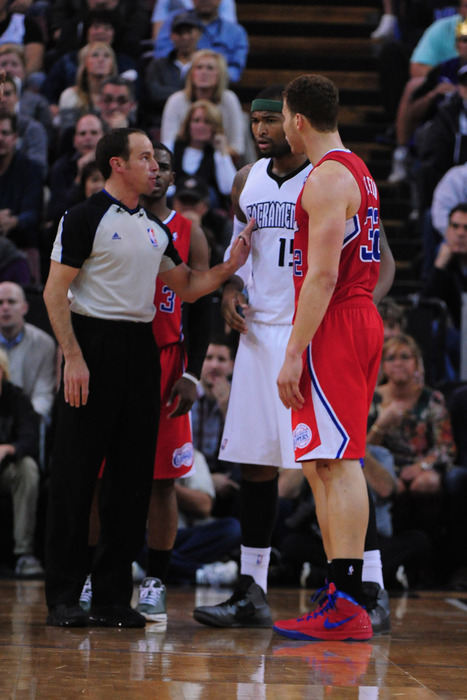 This week's caption contest winner gets fined $25,000 by the NBA.

Do you have a good or bad feeling on this week's upcoming NBA Board of Governors meeting?

Personally, I feel like we'll only have good news come out of it. Stern can be none too pleased at what the Maloofs are doing now.

@ Dallas 4/10 L (We embarrassed the Mavs the last time we played them, which followed up them embarrassing us. I expect this one to be a bit closer, but for Dallas to win. We're still an abysmal team on the road.)

@ New Orleans 4/11 W (Eric Gordon and Carl Landry are back and the Hornets have been playing better of late. Still, this is a team we should beat.)

@ Oklahoma City 4/13 L (We play the Thunder three times this month, and this is the first of those matchups. We surprisingly beat them when they visited at home earlier in the season and I don't think they've forgotten. This one could get ugly.)

Nostradumbass Record for the Season: 30-26