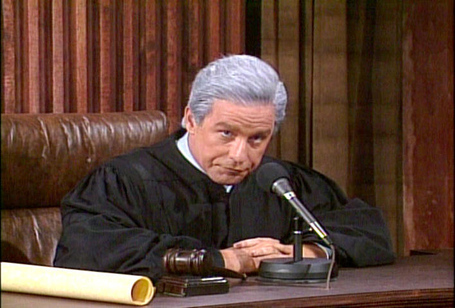 Hear ye’, hear ye’, all come to order. The court of common sense and reason is now in session, the honorable rbiegler now presiding (note – rbiegler had nothing to do with this, but "the honorable section214" rang very hollow, so I went to ‘biegs for some cred).

rbiegler: Be seated. We are here today to hear the case of the NBA lottery: Fix or no fix. Is the attorney for "Why it was fixed" ready?

rbiegler: And the attorney for "Why it is not fixed?"

2003 – 1st pick goes to Cleveland, who finished the season tied with Denver for the worst record in the league (17-65). Why it was fixed: Hometown kid goes to the Cavs. Why it was not fixed: Cleveland had the worst record, and the league stood to profit much more had James landed with fellow lottery teams New York, Chicago, or Detroit. The Clippers were in the lottery, too. Verdict: No fix.

2004 – 1st pick is secured by Orlando (worst record in the league at 21-61). Why it was fixed: I don’t know…let’s say that it was payback for losing Shaq eight years earlier. Why it was not fixed: The Bulls and the Sixers would have been more profitable targets for the NBA. Even the Clippers would have made more sense. If you’re going to play the hometown angle from a year earlier, Dwight Howard should have wound up with Atlanta, who was also in the lottery that year. Verdict: No fix.

2005 – Milwaukee snags the prize after finishing 6th worst record (30-52). Atlanta had the worst record that year. Why it was fixed: Wisconsin’s huge Australian population. Why it was not fixed: The Knicks were right behind the Bucks in the lottery! The Lakers were in the lottery!!! Atlanta is a bigger market than Milwaukee and could have really used the boost. The Clippers…well, you know. Verdict: This one didn’t even get to verdict. Dismissed, and don’t bring such a ridiculous case back to my bench ever again.

2006 – Toronto, 5th worst record, 27-55. Really, you’re going to argue Toronto? Why it was fixed: Hell, let’s go with Stern was trying to establish a greater international presence. It always sounds better when we incorporate Stern into it. Why it was not: Chicago, Boston, Philly and Houston (the Rockets could have drafted Texas’ LaMarcus Aldridge) were all lotto teams. And if you wanted to play the international card, you could have given the pick to Seattle – they’re practically Canada, right? Verdict: The inclusion of Stern in the argument is compelling, but I’m going to have to rule no fix.

2007 – Tied for the 6th worst record, Portland and their 32-50 record strikes gold. Why it was fixed: What, do I have to draw you a roadmap? Oden will finally square the Blazers for that terrible Sam Bowie over Michael Jordan pick. This will fix everything! Why it was not fixed: Look no further than the fact that Boston owned the 2nd worst record in the league that year, and the Bulls were right behind Portland (via their acquisition of New York’s pick – Isiah Thomas, you Eddy Curry-acquiring magnificent bastard…without that deal, perhaps Joakim Noah drops into our lap…but I digress). And yes, the Clips were again in the lottery, as well as the Sixers. Verdict: No fix, and thanks for bringing up that whole Noah thing. While you’re at it, why don’t you give me a paper cut and pour lemon juice in it?

2008 – The Bulls own the 9th worst record at 33-49, but wind up with the #1 pick, which for a brief period of time looked more like Michael Beasley than Derrick Rose. Why it was fixed: Are you kidding? The #9 team? They had less than a 2% chance of landing the pick. Puh-lease. Why it was not fixed: Well, aside from the fact that you have not shown one shred of a hint of evidence for the past five years, I would point to the fact that the Knicks could have desperately used Rose (the Knicks had to sign Chris Duhon as a free agent to run the point, for f*ck’s sake!). And the Knicks, as the 5th worst team, had a 4.5 times better chance of landing the #1 pick than the Bulls, so it would have been much easier to pull off. Verdict: Close, but the Knicks testimony is overwhelming. I mean, Chris Duhon? No fix.

2009 – The Clippers finished tied for the 2nd worst record in the league (19-63), two games better than the Kings. Why it was fixed: Send Blake Griffin to the big city! Oh, and I almost forgot – Stern is out to screw the Kings! 27 free throws! 27 free throws!!! Why it was not fixed: Brand new team in Oklahoma City could sure use the hometown kid. And if you’re hell bent on sending Griffin to a big city, there’s this team in New York City in the lottery. Besides, Sterling is already making money hand over fist and he’s quite possibly the worst human being in the world (pre-2012 M*loof). Verdict: No fix.

2010 – Washington finishes the season tied with the Warriors for the 4th worst record at 26-56, one game ahead of the Kings (oh, if only the Kings had won one more game – why oh why did we tank?). Why it was fixed: Pulling out all the stops here – the President loves basketball, and Stern used the pick to curry favor with the White House. Oh, and it was a posthumous gift to Abe Pollin. Why it was not fixed: Wall could have been better for the NBA in Philadelphia, Detroit, Los Angeles (again with the Clippers!), or even Golden State or Houston. Verdict: Close, but Ted Leonsis looks too much like section214. No fix.

2011 – Cleveland finishes with the 2nd worst record in the league, two games better than Minnesota, but they land the #1 spot from the #8 hole, which they acquired from the Clippers for taking on Baron Davis (ah, Sterling!). Why it was fixed: The league was making good for the exodus of LeBron James. Why it was not fixed: What in the hell did the NBA owe Cleveland, especially after Cavs owner Dan Gilbert acted the fool? Sacramento could have used this pick, much, much more when you consider the whole relocation/arena thingy. Hell, giving it to the Kings would be a win-win for the NBA. Either it cements the Kings in Sacramento, or Kyrie takes his act to Disneyland. Oh, and the Pistons need a break here, really. Verdict: Convenient, but the NBA never feels as though it owes anyone, so the make-good for James just doesn’t pass muster here. No fix.

2012 – In spite of winning 6 of their last 10 and having the 7th worst point differential in the league, the Hornets finish tied for the 3rd worst record in the league. They jump up two spots to grab the #1 pick. Why it was fixed: Are you freaking kidding me? The NBA owns this team. Give me a break. Why it was not fixed: Actually, the NBA sold the franchise last month, to the same guy that owns the New Orleans Saints and has deep ties to the New Orleans community. If there is a team in the lottery that probably needs the #1 pick the least from a marketing standpoint, it may be New Orleans. The Kings desperately need the pick (whether they are staying or going), as do Michael Jordan’s Bobcats (and if we’re talking about who the NBA owes, MJ is a good place to start). How about some love to Portland for the Oden debacle? Hey, if you bounce the new Brooklyn team into the top 3, they get to keep their pick. Otherwise, poof! And our old friends the Pistons, Warriors and Rockets are all here, too. Verdict: No fix.

Rusty Llewelyn: And there you have it. A sweeping verdict that is sure to convince absolutely no one wearing a tin foil hat or those that own every Oliver Stone movie. I’m Rusty Llewelyn, reminding you that when the Kings don’t win the draft lottery, don’t take the law into your own hands – just blame it on David Stern.