Share All sharing options for: You Don't Know Pain

In the grand scheme of fandom, this has been the most difficult stretch in Sacramento Kings history, primarily due to the unholy combination of on-court failure and off-court drama. But focused entirely on the court, it's actually been worse. I give you The Brown Standard. (Click to enlarge.) 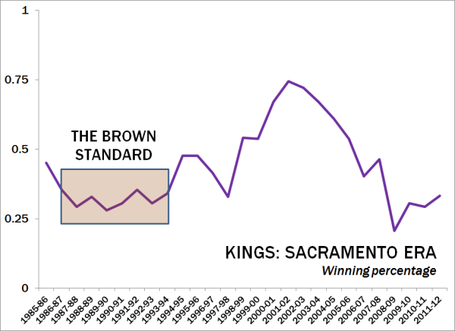 The Kings have had four straight seasons with a winning percentage under .400. In the late '80s and early '90s, Sacramento experienced an eight-year stretch that long. Extending the pain a bit more, the Kings are currently mired in a stretch of six seasons under .500. Back in the early Sacramento era, that string reached 13 seasons. The first 13 seasons of Sacramento Kings history.

There are two distinct ways to look at it: we haven't seen nothing yet, or it could be worse. Choose one. But to anyone who is a newer fan of the team, dating back to the Glory Era or more recently ... yep. This is the norm for Sacramento Kings fans.