The Magnificent Destruction Of The Maloofs' Reputation

Share All sharing options for: The Magnificent Destruction Of The Maloofs' Reputation

We see everything because we're real close to the situation and we notice everything that gets reported, rumored or whispered. It is rather obvious as to why we are nearly unanimously aggravated by the Maloofs' action over the past 5-6 years.

What's worth noting is how the wider audience -- the nation's NBA observers, media and fans -- has found out about the Maloofs, as well.

After the jump, two graphs that show just how far the Maloofs' reputation has fallen in the past decade.

As we know, ESPN The Magazine does annual Ultimate Franchise Rankings. A bunch of numbers go into it. One is a grade on team ownership. Here's the short description of what the ownership grade stands in for:

Honesty and loyalty to core players and local community.

Opinion research is involved. A firm polls fans of each team on the metrics. So the ownership grade is produced by Kings fans polled by ESPN's research firm. As we know, the Maloofs were ranked the absolute worst owners in all of major North American pro sports leagues this year. They were second-to-last in 2011. But it wasn't always this way.

Here's the Maloofs' ranking among all teams in the NHL, NBA, MLB and NFL throughout the 10-year history of the Ultimate Franchise Rankings. 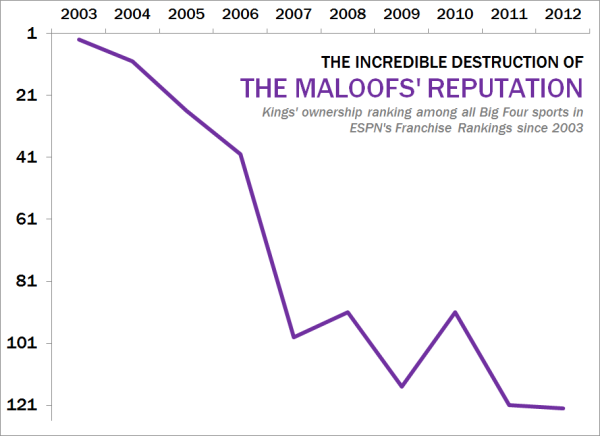 Sacramento fans landed the Maloofs No. 3 overall in 2003, and No. 10 overall in 2004. Things fell apart incredible in 2006. They have been in the bottom 25 percent since, including two bottom-two placements.

Here is that same graph using only NBA teams. 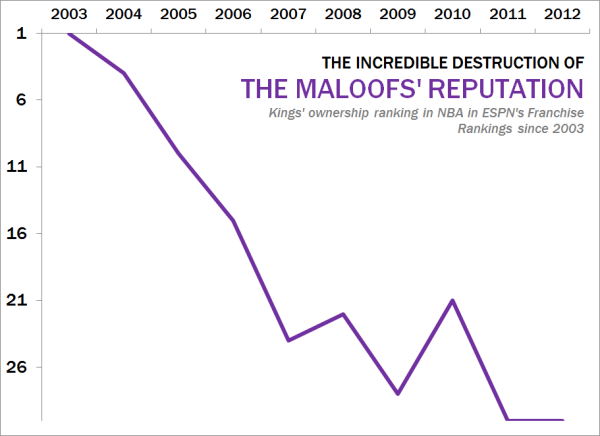 Obviously, why the Maloofs were not going to keep their top billing forever, 2006 shows a huge breaking point. What happened in 2006? That Carl's Jr. commercial and the Maloofs' sandbagging of Measures Q and R. That dropped their popularity massively. Some fans forgave them over the next couple of years, but most apparently didn't or just weren't keen on them.

Then came Anaheim. No one is forgiving them for the actions of the past two years. And they aren't climbing out of this one until they build a new arena.

The Maloofs sure love being a pro sports family. I wonder how they feel about being named THE WORST OWNERS IN ALL OF SPORTS by their own customers.