The Good, the Bad, and the Ugly: Week Ten

Share All sharing options for: The Good, the Bad, and the Ugly: Week Ten

JT followed up a relatively poor week last week with one of his better weeks. He scored at least 14 points in all five games this week, and only shot under 50% once, against Brooklyn, and even then just barely. The one area Thompson didn't do really well in however was rebounding, grabbing more than 6 boards just once.

Mainly due to various injuries, Cisco has been called upon a lot this year and has been playing very well. While his shooting has been inconsistent, his effort and effectiveness on the defensive end has not. In at least two of the wins this week (against Cleveland and Toronto), Cisco's defense was a key factor in the wins.

Tyreke had a second opinion on his knee this week which confirmed the Kings' original diagnosis and treatment plan. Evans has missed 16 games this season due to the knee injury he sustained earlier this year against Minnesota and has had several setbacks when trying to come back from it. However it does look like he'll come back to the lineup on Monday against Memphis, which is a good thing. When Evans has been on the court this year, he's been playing very well, and it also helps our team add more depth.

2-2 for the Kings on almost any road trip is not bad, and it was nearly 3-1 if they would have just executed down the stretch against Detroit. Hopefully it gave them a little bit more confidence for when they go back out on the road at the end of January and for most of February (which has just 3 home games all month).

I have to give credit where credit is due. There aren't many people who were as upset about the trade that brought Salmons back as me, and his performance last season (along with Jimmer's) served as some justification. But this season, he's been consistent and effective. He's the best mid-range shooter the Kings have, and he also shares the ball willingly and plays solid defense. I don't think anyone really has any complaints about Fish this year, and deservedly so.

I know there were a lot of complaints about the new layout when we switched a few months ago, I think a lot of the complains have been rectified with this layout update based on user feedback. Please feel free to leave more feedback in the comments below, and I will do my best to forward anything to the right people.

Sacramento's bench was pretty awful this week, and part of the reason was simply because of a lack of depth and/or options for Coach Smart. With Evan and Thornton out, he often relied on very small lineups of Jimmer and Brooks in the backcourt, with James Johnson, Thomas Robinson and Chuck Hayes up front. Now, it's not like this couldn't have been rectified with better rotations from Smart. He needs to figure out a way to keep one of Cousins or Thompson on the court at all times because Hayes and T-Rob as a frontcourt simply does not work, particularly when paired with Johnson. Brooks and Jimmer similarly have their own issues. However Smart continues to stick with wholesale line-up changes between quarters and it's not working. The bench, which primarily comes in the 2nd and 4th quarters, ends up giving up big leads. While Sacramento outscored their opponents by a combined 33 points in the 1st and 3rd quarters, the 2nd and 4th quarters (when the bench primarily sees time) saw Sacramento give up a combined 25 points (29 in the 2nd quarters, of which they never won this week). Hopefully adding Evans to the lineup soon will help alleviate some of the bench problems, as before he was injured Smart was trying to keep one of Cousins/Evans on the court at all time.

Thornton sprained his ankle on Sunday against the Celtics after landing on Jason Terry's foot after a three point shot. Thornton had been playing well since coming back from visiting his ailing mother and it really hurts to not have someone of his offensive caliber available. There isn't yet a timetable for his return although he seems to be progressing well so far, having participated a bit in a couple of shootarounds, mainly just with set shots though.

The Kings were shooting absolutely bonkers from three last week and even during the Boston game. That had to come back down at some point and it did on the road trip, where they were just 22 of 75 (29.3%). That's one reason the Kings assist numbers were down from their previous streak of 28 in five games in a row; a lot of those had come from kickouts to three point shooters.

YOU DON'T MESS WITH THE PIZZA GUY OR YOU GET SERVED UP AN EXTRA LARGE EJECTION WITH A FINE ON THE SIDE.

Usually when a team shoots 51.8% like Brooklyn did against the Kings on Saturday, they don't end up grabbing that many offensive boards because there aren't many to grab. But Brooklyn still managed to rebound 21 of their 41 misses, just slightly over half the possible opportunities, which is an insane amount. Cousins led the Kings with defensive boards with 5, but the next highest was Aaron Brooks with 4, which is not good at all. Jason Thompson and Chuck Hayes didn't have a single defensive board among them, and Thomas Robinson had just 2. Rebounding has been an issue for the Kings all year, and it doesn't seem like it's a problem that can be fixed with current personnel.

2. What comes next for the Maloofs?

An ugly situation is set to become even uglier. Virginia Beach's deal appears to be on death's door, with the Mayor of Virginia Beach apparently very frustrated at the lack of progress on the "mystery" team's front (which is almost proof that it has to be the Kings) and has set a Monday deadline for a lease to be signed. I absolutely cannot see the Maloofs putting their names to a deal that has no funding and very little chance of getting funding, and while that's comforting, I'm a bit worried as to what comes next. Seattle has and always will be the biggest threat, with Chris Hansen having recently snagged up even more property around the proposed arena site. Chris Hansen and his investors have deep pockets, and even the mere fact that we've heard a $500 million out there as a price the Maloofs would sell the team at scares me a bit, because if there's anyone who can afford to really overpay for a team it's Hansen and his group.

What a turnaround from last week, huh?

Since Cousins has come back from suspension, he's been playing like a different player. He's been both dominant and efficient on the offensive end of the court, and his defensive effort, which had been so lacking through most of the year, has come back. Perhaps the biggest difference has been him buying into the team concept and moving the ball rather than forcing bad shots, something that has paid off big time by getting the other Kings open shots as teams come to double DeMarcus. We saw his first career triple-double this week, and a 31 point, 20 rebound performance. This DeMarcus Cousins is the one that is worth the trouble and I hope he's here to stay. Winning cures all, and this version of Cousins will help the team lead to more wins along the way.

I can't decide between this hilarious almost turnover by Cousins:

or "the Pizza Roll"

(h/t HeuristicLineup for making the GIF)

"Hey DeMarcus - why so angry?" 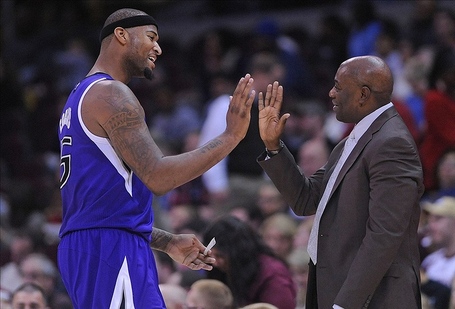 First off, Nostradumbasses of the Night for the Brooklyn game were adamsite, AkaP, Interested Observer, and OJandKush with 7 points each.

Nostradumbass of the Week was adamsite with 18 points

1/7 v. Memphis L (The Grizzlies are a solid team that have given us problems over the last few years)

1/10 v. Dallas W (We have the same record as Dallas right now and we owe them some payback for embarrassing us earlier this year)

1/11 v. Miami W (Yeah. I went there. The Kings tend to get hyped for big teams and Sacramento does have a distinct size advantage. Nobody is going to stop LeBron or Wade, but if we can slow everyone else down, we should have a chance)

Nostradumbass Record for the Season: 22-12