Doug Christie on Shaq becoming a Kings owner: 'It's awkward'

Doug Christie participated in the Kings Rhythm 'N Rims event on Sunday. He shared his thoughts on Shaquille O'Neal becoming an owner of the Kings.

Share All sharing options for: Doug Christie on Shaq becoming a Kings owner: 'It's awkward'

Doug Christie, who will always be remembered for his stellar defense and that uppercut to Rick Fox's jaw, shared his thoughts Sunday on Shaquille O'Neal becoming a minority owner of his former squad, the Sacramento Kings.

"It's awkward because he beat the s - - t out of us so much," Christie told Sactown Royalty. "But at the same time, it's a game. I understand it, and then at the end of the day, it's a business. He's [O'Neal] a business man and it would be crazy for him to be the one to help facilitate a championship. How awkward is that? Wow."

Awkward indeed. Chris Webber recently had this to say about O'Neal's ownership stake in the team: "As a King, it's disgusting."

But like Webber, Christie had positive things to say about the move.

"I love Shaq, I've always loved how he's able to play with that edge, but entertain and have a good time at the same time," Christie told Sactown Royalty. "I'm excited for the organization because Shaq has so much knowledge about how to build a winner and how to sustain it; the way that you need to conduct yourself. Obviously, he's been through all the battles with us so it's a good synergy that I think ultimately will work."

In his new role, O'Neal plans to mentor DeMarcus Cousins. Christie said there is no one better for that.

"No better tutor than Shaq as far as understanding what you need to do, making sure that you are ready to play. He's won championships so he knows how to go through it and maybe DeMarcus will be open to hearing that and listening to that," Christie said.

Christie made the comments at the Kings' Rhythm ‘N Rims charity event where the team constructed a temporary arena on Capitol Mall in downtown Sacramento to hold a free exhibition game.

Guard Greivis Vasquez, who is coming off of ankle surgery, participated in the first half of the exhibition game and moved well. He was seen icing his ankle on the sidelines for the entire second half, however.

Vasquez is expected to make his preseason debut with the Kings Monday night against the Clippers.

"I think I'm going to play between 10 to 12 minutes," Vasquez said. "It's doing pretty well [ankle], I mean I'm moving good. I'm doing pretty good I just don't want to overdo it and rush, I just want to go step by step."

Vasquez plays with a fluidity that Kings fans will surely enjoy, and he can thread the needle with his passing. (Although one such instance resulted in a turnover during the game on Sunday.) But hey, this wasn't even a preseason game, it was an exhibition game.

The Rhythm ‘N Rims event was well attended and made for a unique experience in downtown Sacramento. Funds raised through the 5K walk that took place before the exhibition game went toward 15 local charities.

Here are some photos from the exhibition game. 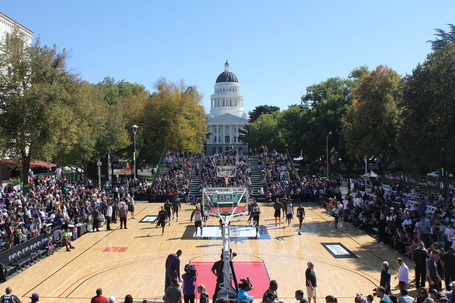 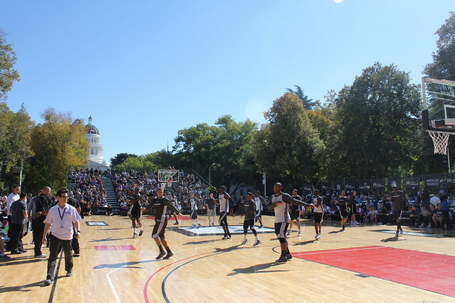 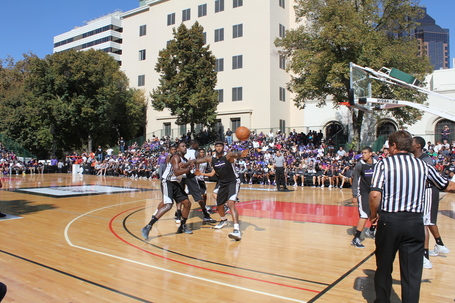 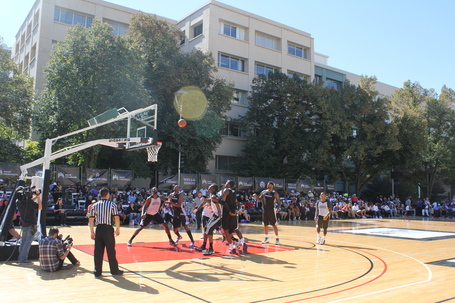