The two point guards are in a friendly, but highly competitive battle right now. Who will start the season on opening night?

The Kings have two very capable point guards. The question right now is, who is going to be the one who starts on Oct. 30, Greivis Vasquez or Isaiah Thomas?

Head coach Michael Malone recently said that the lineups in preseason games five through seven would be the starting lineups to begin the season. That means we will most likely find out who the starters are on Sunday night when the Kings take on the Blazers in Portland. (Update: Malone has since changed his mind about this.)

"It's toe-to-toe. Those guys are both doing a great job," Malone told Sactown Royalty following Thursday's win over the Phoenix Suns.

McLemore is getting better 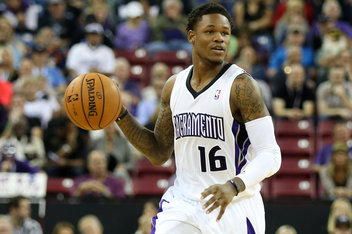 After four preseason games, Thomas is averaging 11.2 points, 5.2 assists, 1.7 rebounds and 0.5 steals in 25 minutes of action. Vasquez, who is coming off ankle surgery, has only played in two games for limited minutes (11 minutes and 15 minutes) and is averaging 6 points, 1.5 assists, 1 rebound and 1 steal.

The 5'9" Thomas, who says he wants to be the "Muggsy Bogues of this generation," beat out Aaron Brooks last season for the starting point guard spot and is well aware of what separates him from Vasquez.

"We're not close to the same player. I mean he's a bigger guard, slow-paced guard kind of like Andre Miller," Thomas told Sactown Royalty. "He makes good plays, makes the right play most of the time, and he's a guy that even if you pressure him, he's not going to go faster than he usually does, he's just going to do what he's good at, and that's controlling the offensive end ... Me, I'm up and down, I'm 100 miles per hour."

The 6'6'' Vasquez, who came to the Kings this summer in the trade that sent Tyreke Evans to the New Orleans Pelicans, recognizes the competition between him and Thomas and says he isn't worried about who starts.

"It's about winning. Whether he's on the court or I'm on the court, it's about the team. It's not about me starting or him starting," Vasquez told Sactown Royalty. "I think eventually, coach is going to let us play together. I have big hope because he can really score and we can both create."

More: Who's getting minutes? Katy Perry on opening night?

Thomas and Vasquez briefly got an opportunity to play together on Thursday night. Malone said the Kings could go small sometimes this season and slide someone like Travis Outlaw to the power forward spot with either Ben McLemore or Marcus Thornton playing at small forward, which would leave the window open for Vasquez and Thomas to occupy the one and two spots. That, of course, will be situational.

One thing about Vasquez is he is a "true point guard," something the Kings haven't really had since Beno Udrih. Thomas, on the other hand, certainly deserves starting minutes based on his performance last season and the fact that he has played well so far in the preseason.

It does seem that Vasquez has a good grasp on the type of offense the Kings want to run through DeMarcus Cousins.

"I feel like we've got a great advantage when you have a big guy that can dominate the post, so we've got to play inside-out," Vasquez told reporters Thursday. "I've just got to get my guys in the right spots to throw him the ball, and have the right spacing - that's very important for us."

Both players agree that the competition between the two of them is an overall positive for the team.

"It's going to be a year-long battle, but it's a good battle. At the end of the day, we know we're teammates and we know we're trying to make each other better," Thomas said.

The option of having two players with talent and natural leadership skills is a luxury for Malone and it will be interesting to see how he utilizes both Thomas and Vasquez throughout the season. Also, we'll have to keep a close eye on how rookie Ray McCallum is able to development being the third man in the rotation at the one.