In addition to basketball, there are a lot of great reasons to attend tonight's Kings game.

The goal is to use the "Pink In The Paint" game to promote the local breast cancer foundation Albie Aware. Also at the game, the Kings will honor the one and only Sign Lady (Barbara Rust), who has been diagnosed with breast cancer.

Here are details from a Kings statement.

The Sacramento Kings will observe Breast Cancer Awareness Month at the October 23 "Pink In The Paint" preseason game versus the Golden State Warriors. The Kings will use the game to draw attention to Albie Aware, a local foundation created in the memory of Albie Carson who lived in Sacramento for 50 years before succumbing to breast cancer in 2002. Starting tomorrow, fans can text KINGS to 50555 to donate to the foundation.

The Kings encourage fans to wear pink to the game to raise awareness for breast cancer. The Kings coaches will be wearing pink ties and the Kings players will be wearing pink sneakers and/or pink shoelaces. Fans can purchase a T-shirt featuring a special Kings/pink ribbon logo in the Kings Team Store for $15. All proceeds from the sale of the T-shirts will go to Albie Aware.

Along with recognizing Albie Aware, the Kings will honor one of its most beloved fans, Barbara Rust, who recently announced that she has been diagnosed with breast cancer. Rust is known fondly as "Sign Lady" for the steady stream of inspirational signs she has flashed at the team from her seats in the arena for years. The team also is raising money for the foundation by auctioning off two signs made by Rust especially for this event.

At halftime of the game, Kings owners, Vivek Ranadivé and Mark Mastrov, and team president, Chris Granger, will honor Rust and staffers from Albie Aware. The team will feature breast cancer awareness messages throughout the game including video clips of the players encouraging fans to protect themselves through early detection of the disease.

If you have had an opportunity to meet Barbara and her husband Niko Rust, then you know that they aren't only great Kings fans, but that they are also great people. Check out KFipp's post on them a few weeks back.

Those who are going to be at the game tonight also will have the opportunity to sign the below banner (which was paid for by a number of Kings fans, including some of the good folks here at StR) for Sign Lady at Section 118 on the concourse. The banner will be available for signing the entire first half. 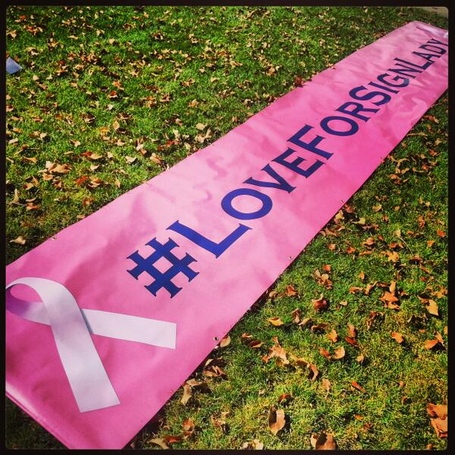 If you are going to be in attendance, make sure you swing by and show some #LoveForSignLady!