The Good, the Bad, and the Ugly: Preseason Recap

We take a look back at what was a pretty successful preseason for Sacramento, aside from a couple of injuries.

Share All sharing options for: The Good, the Bad, and the Ugly: Preseason Recap

Preseason is meaningless in terms of wins and losses but that doesn't mean we can't take anything away from it. The Kings have a fresh start with several new players and a brand new coaching staff. Mike Malone is renowned for his defensive acumen and he has a big job on his hands in trying to reform the Kings, who were one of the worst defensive teams in the league last year. That was not the case in the preseason, as Sacramento held opponents to 93.9 points and 42.4% shooting. The other area Malone wanted the Kings to focus on was defensive rebounding, another area the Kings were terrible at last year. In the preseason the Kings outrebounded their opponents on both the offensive and defensive glass. Hopefully these trends continue when the games count.

See Player of the Preseason

For much of the preseason, the focus on the Point Guard spot was whether or not incumbent Isaiah Thomas or newcomer Greivis Vasquez would start. Thomas was electric this preseason, scoring more than anyone not named DeMarcus Cousins and singlehandedly keeping the Kings in games. Vasquez came along a bit slower to get back into game shape but it was clear that he was a very talented playmaker, especially in the last game against the Clippers. It seems that Vasquez will be the starter and Thomas will come off the bench to provide a spark and change of pace. Neither Vasquez or Thomas is an elite point guard, but both are capable of running the offense and should give the Kings one of the better 1-2 punches at PG in the league.

McLemore's summer league was rougher than Sleep Train Arena's parking lot pre-Vivek. It was almost the opposite in the preseason. McLemore came off the bench in all 7 games and contributed positively in some way in each of them. His shot wasn't always falling, but he was taking good shots. A lot of fans would probably like to see him as the starting SG, including myself, but Coach Malone wants to bring him along slowly, which I can understand, especially given the presence of Marcus Thornton. McLemore will definitely be a contributor this season, and looks to be a big part of the future.

It was very nice to see Travis Outlaw have a good preseason. Outlaw has had a rough few years in both Sacramento and New Jersey, but he has looked good this past month. Malone played Outlaw in all 7 preseason games and it looks like he will be more of a contributor for Sacramento this season than ever before.

Cancer sucks, and it's even worse when it affects someone you love. I was incredibly sad when I heard that Barbara Rust, aka Sign Lady, was diagnosed with breast cancer earlier this month. But I know she is incredibly proud to see how the Kings community has grown closer in the past month because of it. I wish she could have been there last Wednesday when the Kings honored her at halftime, and I hope to see her happy and healthy and cheering again soon.

Patrick Patterson is the lone holdover for Sacramento from last year's Thomas Robinson trade, and he's got a lot of pressure to perform because of both that and Carl Landry's injury. Nobody played more in the preseason than Patterson, but he lived up to expectations. He scored efficiently, both inside and out, and showed improvement on both the glass (although he's still not great there) and on defense.

Chuck Hayes has a simple checklist for when he gets in the game: defend,rebound, set screens, and occasionally hit open layups or half-hooks. He performed all of those jobs admirably, and was Sacramento's second-best rebounder. I have a feeling Malone will be using Hayes a lot more than Keith Smart did.

When the Kings traded for Mbah a Moute, the hope was that he could help solve Sacramento's SF situation. So far that hasn't been the case as he's been nursing a sore knee for most of the past month. It will be interesting to see how Malone works him into the rotation and what exactly he will be able to contribute.

Jimmer had some very good moments in the preseason, which just makes it all the more frustrating for fans of Jimmer who want to see him succeed. Sacramento just has too many guards who deserve playing time and unfortunately for Jimmer, he's probably the one left out of the equation. The Kings still haven't picked up his fourth-year option, but have until the 31st to do so. If not, he'll be an unrestricted free agent at the end of the season. I think Jimmer can be a good NBA rotation player, but I'm not sure he'll ever get the chance to be that in Sacramento.

JT did not have the best preseason, especially on the offensive side of the ball. The normally efficient Thompson (career 49.9% shooter) shot just 37.8% from the field, truly abysmal for a big man. He was also awful from the line at 46.2%. Thompson will likely be Sacramento's first big off the bench, and the Kings will need a return to form in the regular season, especially with Landry out.

Carl Landry was supposed to be a big part of this Kings team when Sacramento signed him to a 4 year deal this summer. Unfortunately he suffered a torn hip flexor that is going to keep him out until January or February. The Kings are fortunate that they have some quality depth at PF, but Top Hat was the most proven. Hopefully he doesn't suffer any setbacks and the Kings can work him back into the rotation around the All-Star break.

It is my guess that the Kings will block more people on Twitter than in NBA games this season. There isn't one player on the team aside from Hamady N'Diaye that I would consider an above average shotblocker, and if you're playing N'Diaye meaningful minutes, you've probably got worse problems to worry about. Sacramento recorded just 16 blocks in 7 games of the preseason, and had two games without a block at all. Fortunately the Kings showed they were able to defend without a real shotblocker.

Player of the Preseason:

DeMarcus Cousins had an almost perfect preseason. After a 4 year, $62 million extension, fans were looking forward to seeing Cousins maximizing his potential and earning that contract. So far, it looks like he's doing everything in his power to do so. He looks like a different player. He's still not a great defender or anything, but he's definitely showing more effort on that end, and he's hardly complained or pouted in games at all. Offensively his performance has been night and day. There has been a concerted effort by both Cousins and the team to get him shots in the paint, where he scored and drew fouls at a very high rate. He averaged nearly 30 points per 36 minutes and more importantly he scored those points efficiently. If this is the Cousins we see in the regular season, the future is looking very bright.

Image / GIF of the Preseason:

Yokosolo ran away with the competition. Here are all the GIFs he created this preseason

On just how "watchable" the Kings are

I find them unwatchable thus far.

In that their games have been unavailable for me to watch. But they seem to be very readable at this point.

FanPost of the Preseason:

The Sacramento Nuggets: A Name Game by TitleChaser

Highlight of the Preseason:

John Salmons' game winner against the Warriors was awesome but I can't seem to find a video on it. Isaiah Thomas' shot that preceded it was great though:

Shaq uses iPad as a phone.

"StR, stop calling me, I have told you a million and one times: I CAN NOT PLAY SF!" 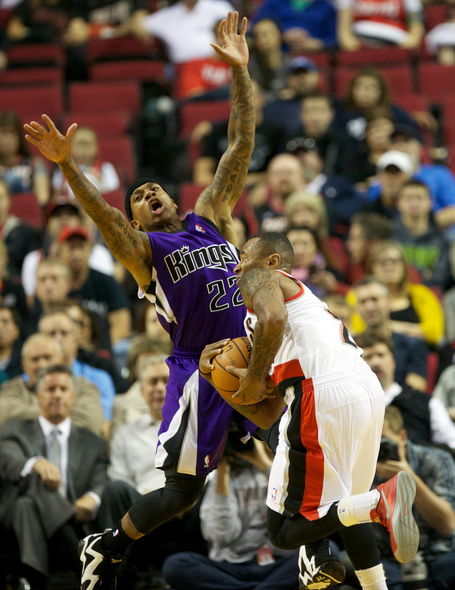 10/30 vs. Denver W (I think the home crowd will be electric and the Kings will feed off of this energy to pull off a victory in what should be a competitive game.)

11/1 vs. L.A. Clippers L (Preseason wins and losses don't matter but I think the Clippers will be eager to get the taste of two preseason losses to Sacramento out of their mouths. As long as Sacramento is competitive, I'll be happy)

11/2 @ Golden State L (The Kings and the Warriors always usually play close, fun games but I think this one will go to the Warriors due to homecourt advantage)