Sacramento has a team. The rest is gravy.

Share All sharing options for: Sacramento Kings preview: All hail a new era

This is the official Sactown Royalty preview, a part of the SB Nation NBA preview series. The intent is to educate the masses what happened in Sacramento this summer. Heh. Heheheh.

1. What significant moves were made during the off-season? 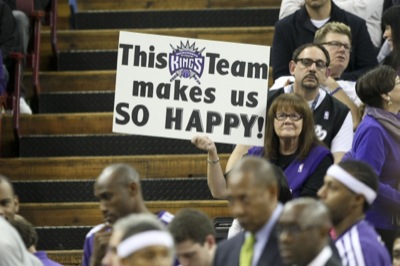 Well. First, the team, you know, stayed in Sacramento. Then the Kings shook the Maloofs off. The team got new ownership -- smart ownership! -- and then a new coach (Michael Malone) and GM (Pete D'Alessandro). The rest was gravy. Gravy that didn't always look totally appetizing, but alas.

The first big move of the new regime was to take Ben McLemore at No. 7 overall in the draft. McLemore had been considered a potential No. 2 or 3 pick who slipped down to the Kings, apparently riding on Nerlens Noel's sled. The Kings had considered moving up for him before the draft began, so whew! Glad they didn't do that. In the second round, the Kings picked up another guard, Ray McCallum out of Detroit.

When free agency began, the new regime shocked the city by chasing Andre Iguodala, a legit top-flight free agent. But as A.I. didn't commit to a sizable offer right away, the Kings retracted it and dealt with restricted free agent Tyreke Evans. The Pelicans offered $44 million over four years, and the Kings decided that was a couple million per season too much, so Pete D. worked out a sign-and-trade. Greivis Vasquez and a future second came back to Sacramento, and Robin Lopez went to Portland. Many Kings fans thought that the team could have used Lopez, but alas.

The next move was to add a frontcourt player, and the front office went with Carl Landry, who had played under Malone in New Orleans and Golden State. Small forward was still dicey, so the Kings worked out an unbalanced trade with the blown-up Bucks for Luc Richard Mbah a Moute. And that's how the roster was built.

DeMarcus Cousins was under contract for this season regardless, but the Kings did extend him in late September to pretty much guarantee he won't be traded this year.

2. What are the team's biggest strengths?

Its very existence. Honestly, there's a real honeymoon flavor going into this season. Sacramento was so close to losing its only pro team that retaining it feels like winning a championship. (As if we'd know what that was like.)

On the court, the Kings do seem to have some solid depth. The problem is that the second string is probably as good as the first string, which says a lot about the overall talent level of the roster. The Kings should also be near the top of the league in offensive rebounding again.

More: All of SB Nation's NBA previews to date

3. What are the team's biggest weaknesses?

Defense. Defensive rebounding (though less small forward minutes for Johnny Salmons will help). Shooting, possibly, depending on lineups. Overall talent level. Passing. (There is one plus passer on the team, Vasquez.) So yeah, almost everything at this point.

4. What are the goals for this team?

The stated goal by the coaching staff is defensive improvement. That shouldn't be terribly difficult as the Kings finished No. 29 in defense last season. Mbah a Moute's arrival and the coaching switch should help dramatically. Vivek and Pete D. have insisted this team won't be graded on wins and losses: improvement on defense and building a cohesive unit are the goals. This team's been toxic for a long time, and getting that stink off is important.

Every hero is just a touch deranged. We're down with it.

Bottom Line: My prediction is that the team will go 33-49, but that it will be the most wonderful 33-49 season of all-time. A couple of players will get traded midseason for young prospects and/or picks, the Kings will have a pick from No. 9-11 in June and will make a run at a couple of second-tier free agents in July. And it will be glorious.