Sign Lady has been pouring her heart and soul into the Sacramento Kings for decades. Now she's in need of some love from her fellow Kings fans.

I met Barbara Rust back in 2011 at the first Here We Stay Night game. We discussed the art of crafting the perfect sign and bonded over our unwavering faith that the Kings would remain in Sacramento. She is gracious, kind, accommodating, and above all POSITIVE.

She explained that she started making signs when she realized that she could use them as a way to communicate an encouraging/hopeful message directly to the players seated on the bench just a few feet away. She spends hours with her husband designing and hand crafting each sign because she knows these messages help the team she cares about so dearly. Though she does not particularly care for the notoriety, you'd be hard pressed to find a player or fan who didn't know who she was. Throughout the lengthy relocation saga Barb never had a negative thing to say about anyone. While faithfully displaying her many pro SACRAMENTO signs, she became a close confidant of the the Here We Stay movement. Unbeknownst to many of you she is a frequent lurker on StR (a fact that her husband has reiterated to me on many occasions).

She is The Sign Lady... and i'm proud to call her my friend.

Before my wedding I received a message from Niko asking if I wouldn't mind stopping by the Rust residence to pick up a surprise gift. Barb and Niko had made my wife and I our VERY OWN SIGN. I tried to tell her that this was too much, that they didn't need to do this. Barb went on to explain something to me that I'll never forget. She told me she believes that when a we put love and positivity out into the world, the world returns that same love and positivity back to us in kind.

There's no doubt that Sign Lady will channel the type of passion she has for the Kings and tackle cancer head on. She has everyone in the Kings community (former to current players to media to fans) behind her. Below are just a few of the many.

My heart & prayers go out to Sign Lady of The Kings fighting breast cancer. #LoveForSignLady

Prayers go out to #LoveForSignLady, the best kings fan ever.

#loveforsignlady one of the biggest kings fans EVER!!!

#LoveForSignLady. She's a word person whose messages are filled with love & humanity. We need people like that in the world. #NBAKings

For 28 years Barbara and Niko Rust have taken their seats in section 120 and spread an inspiring message of hope and positivity. If they get even a fraction of that sent back to them then I know Barb will be just fine. I'll be thinking about my friends...

Please leave Barbara and Niko some thoughts in this thread, and if you would like to spread the word on social media, please use the hashtag #LoveForSignLady. 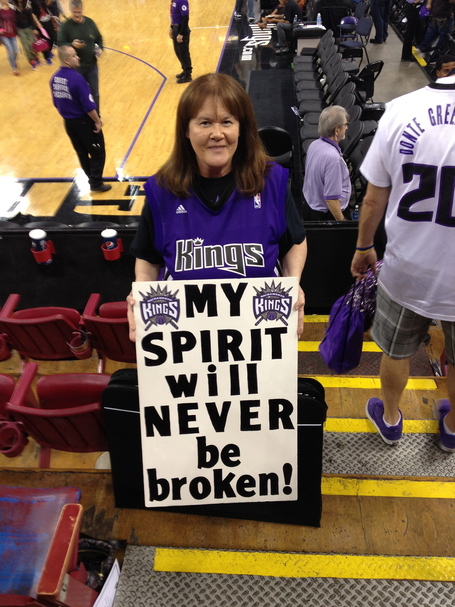