Ben is coming along nicely.  He'll have stretches where he looks lost on the court, especially on defense, but there's almost never a moment where he's not playing hard.  He's also showcasing his shooting touch, improving his three point percentage on the year to 41.7%.  The potential here is amazing, especially when you factor in his explosive athleticism.

Jimmer Fredette is probably one of the most polarizing players that the Kings have ever employed.  So many fans just want to see him given a chance.  He's been unlucky early in his career to be on a team with so many guards.  Saturday, he got his chance against Portland with Marcus Thornton playing so terribly, and while he didn't shoot amazingly, he was able to contribute anyway.  Jimmer came out and played with enthusiasm and energy, something that just can't be said for Marcus Thornton.  Also, given how poorly the team is shooting, I'm all for moving Jimmer ahead of Thornton in the rotation going forward.

A lot of debate has been had over which of these two guys deserves to start.  Thomas has had the better season to date and is Sacramento's second leading scorer.  Both players are also finding their teammates at a high rate; According to NBA.com's SportsVU database, both Thomas (21st) and Vasquez (15th) are in the top-25 in assist opportunities a game (an assist opportunity is when a player passes to a teammate and that teammate takes a shot that if made would be an assist).  However, those opportunities haven't been translating because most of their teammates haven't been able to hit a shot.

A fan got lucky this week and nailed the half-court shot for a brand new car.  But the real question on everyone's mind is ... can he play SF?

When Carl Landry went out with an injury, I wasn't too upset because I figured the Kings had enough depth at the position with Patterson and Thompson.  But both players have not performed up to par so far this year, on either end of the court.  Landry isn't a great defender or rebounder, and he wouldn't solve all of our problems, but he's a guy you can be fairly confident in giving the ball to on the offensive end.

What is there to say really?  These guys have been worse than bad.  Salmons is shooting just 26.8% from the field and has 29 points on 41 shots through 6 games.  Thornton is only slightly better at 33.3% and he also has more shots (57) than points (52).  When Thornton isn't able to score, his value on the court is nonexistant, because he's already a negative on the defensive end.

The Kings so far this season have not been able to prevent themselves from digging double digit holes. If I'm not mistaken, the Kings have faced a double-digit hole in every game this season except for the home opener.  There have been very few stretches of competent Kings basketball, and most of them have come late when the Kings are desperate to try to get back into the game.  At that point it's too late though.  Sacramento needs to be playing with that same sense of urgency the entire game.

Unfortunately the suspension came a game too late for Sacramento's liking.

The big preseason hope was that the Kings would finally be able to solidify their defense from being terrible to at least average.  So far it's been just as bad if not worse.  Much of that has to do with personnel; The Kings do not have very many guys who would be considered plus-defenders.  Tom explains the team's defensive woes better than I can.

2. Rebounding against the Blazers

The Kings had been doing a decent job on the glass until they played the Blazers.  Portland straight up dominated the Kings there, by a combined margin of 35 rebounds in two games.  In game two, the Blazers were able to rack up 19 offensive boards, many of which led to second chance points.

These guys have been so bad I have to put them in both the bad AND the ugly sections.  I'm more pissed at Marcus Thornton than Salmons though.  Salmons is on the downswing of his career and he hasn't had a good season in a few years.  Thornton though is just two years removed from leading this team in scoring and getting a fat payday.  Out of all the Kings, he seems the most apathetic, both on offense and defense. I wouldn't be surprised if he sees a significant decrease in minutes played.

Cousins started off the week on the wrong foot, deserving a large portion of the blame in Sacramento's loss to Atlanta.  He got completely outplayed by Al Horford and let bad calls get under his skin.  Fortunately he bounced back in a big way and was one of our few bright spots in two games against the Trail Blazers. Cousins already has three 30 point games this season, compared to three all of last year.

There once was a man from Nantucket

who suggested DeMarcus to tuck itbut before Cuz could hide ita small German spied itand hurried right over to pluck it.

Why do we only have four players on the court?! Where's our Small Forward??? 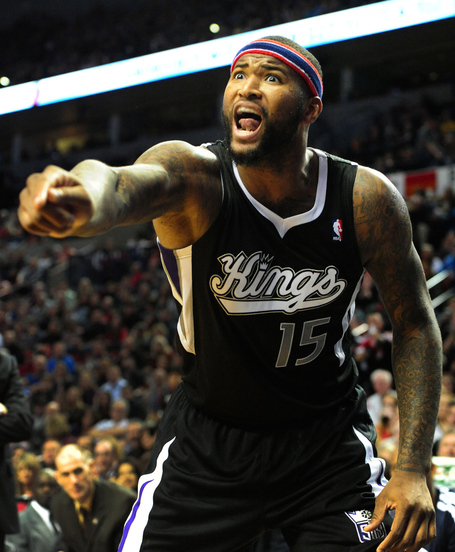 11/13 vs. Brooklyn L (I think the Kings will play a good close game and we'll see some positive improvements from the lineup changes that Malone will implement.  The Nets are a good veteran team though and I think it will take a game for our guys to adjust)

11/15 vs. Detroit W (The Kings will beat the Pistons and set a new Guinness World Record for crowd noise)

11/17 vs. Memphis W (This is a tough matchup for us, but hopefully we can string together a couple wins in a row heading into week three)

Nostradumbass Record for the Year: 3-3